IATA Director General and CEO, Giovanni Bisignani, has forecast that airlines could be operating commercial flights with biofuel within three to five years. The issue, according to IATA, is no longer technological but commercial. Synthetic fuel blends, using the Fischer Tropsch process, have already been approved for commercial use in a mix of up to 50% with standard aviation kerosene.

Drop-in biofuel blends have already been used in test flights by Virgin Atlantic, KLM, Continental Airlines, British Airways, Air New Zealand and several other carriers. However, the certification and testing of biofuels is still under way. With different feedstocks and different methods used in production, certification is a complicated and extended process, but is required to ensure guaranteed performance for airlines.

A large part of the attraction to biofuels comes from IATA’s strong green push for airlines to be more environmentally friendly. Economic incentives, such as the inclusion of aviation emissions in the EU’s Emission Trading Scheme from 2012, are also forcing the issue.

However, with oil prices retreating back below USD80 per barrel, the economic case is not as attractive as it was two to three years ago. Current biofuel costs are estimated at approximately USD100 per barrel, meaning traditional fuels are much more attractive to airlines concerned with their bottom line.

Full commercial production will help drive this number down, estimated to below USD80 per barrel by 2020 (with some forecasts at USD50-60 per barrel), but more work is needed on the economic considerations.

In the next two decades, as standardisation occurs and production increases, biofuels are expected to be adopted wholesale by airlines. Best cast estimates forecast that 50-70% of jet fuel could be replaced with biofuels by 2035, potentially even full replacement (particularly when combined with synthetic fuels). Even the worst-case estimates put biofuel use in aviation as high as 40% by 2035.

More airlines are pushing to test alternative fuels. This year JetBlue, TAM and InterJet will test biofuel blends. Air New Zealand plans to use a million barrels p/a from 2013, KLM hopes to power some aircraft with biofuel blends from late 2011/early 2012. However, there needs to be a reworking of the commercial and policy frameworks, as well as the regulations, before wide-scale adoption can be pursued.

Oil stabilises above USD75 per barrel 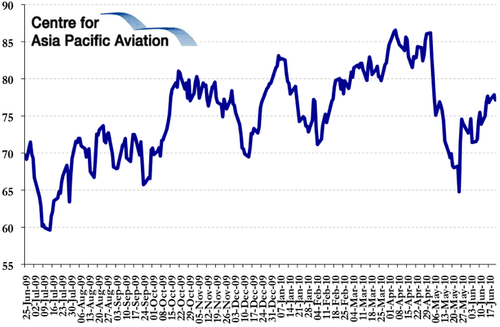 Jet fuel prices have risen steadily since the May-2010 correction, with all markets above USD210 cents per gallon. Singapore prices recovered 5% over the week, while most other markets were steadier. 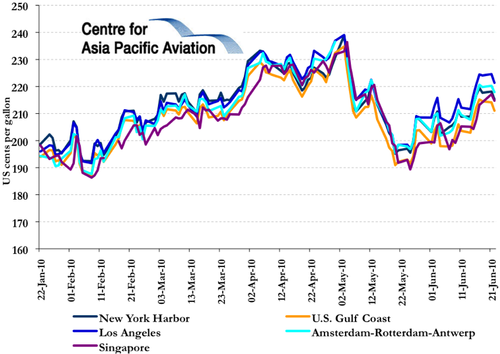