IAG's successes cannot all be attributed to one person, but no one has done more than Willie Walsh to establish IAG as the most consistently profitable and strategically progressive legacy airline group in Europe.

His nine years as IAG CEO, starting when British Airways and Iberia merged to form the group in Jan-2011, will end in Mar-2020. His has been a remarkable career in which he did much to transform the shape of European and global aviation. Iberia CEO Luis Gallego is promoted to replace him.

Mr Walsh leaves IAG financially successful with a range of strong brands in different market segments. IAG leads in the world's biggest aviation market, London; is the largest airline group on both the North Atlantic and the South Atlantic; and has the biggest LCC division among Europe's legacy groups.

The doctrine of return on invested capital exceeding the cost of capital now has a firm foundation in the airline industry. Mr Walsh has been a leading preacher of this creed, contributing to the financial transformation of the industry.

He is also contributing to the transformation of aviation's environmental impact. IAG became the world's first airline group to commit to net zero carbon emissions by 2050. This has prompted others also to improve on the airline industry's long held target to halve emissions by 2050.

Mr Walsh was the first CEO among the larger European legacy airlines to tackle labour cost restructuring, going back to spells as CEO of Aer Lingus (2001 to 2005) and BA (2005 to 2011) before continuing this single-mindedly at IAG.

He has led IAG's transformation from worst performer among major European airline groups in the global financial crisis to a disciplined value creation machine. It now regularly makes higher profit margins than the other legacy airline groups in Europe.

It has also overtaken LCC easyJet and is expected to report a higher operating margin for 2019 than ultra LCC Ryanair. 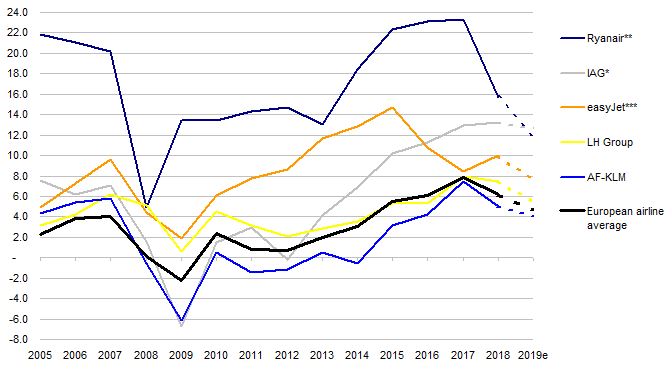 Note: 2019e figures for airline groups are consensus forecasts from S&P Global Market Intelligence, published on marketscreener.com as at 10-Jan-2020; 2019e figure for European airline average is IATA estimate of Dec-2019
*proforma data based on sum of British Airways and Iberia for 2005 to 2008 and supplied by IAG for 2009 & 2010. IAG was formed in Jan-2011
**Ryanair: 12M to March in the year following that indicated
***easyJet: 12M to October
Source: CAPA - Centre for Aviation, airline company reports, S&P Global Market Intelligence, IATA

In addition to the mergers and acquisitions that formed IAG, he has also shown an ability to forge partnerships with other airlines.

For example, he led British Airways into a North Atlantic joint venture with American Airlines and Iberia just before the creation of IAG, a collaboration that continues to be an important source of IAG profitability to this day.

At a time when it was popular for legacy airline groups in Europe and North America to indulge in anti-Gulf airline rhetoric, Mr Walsh eschewed such attempts to blame external factors for what was often a lack of resolve to tackle internal problems and formed a partnership with Qatar Airways.

Under Mr Walsh, IAG ensured that each operating airline retained its brand, while sharpening its market focus and adopting strict financial targets.

Failure to meet targets means the withdrawal of investment and no growth in fleet or network. This was initially the fate of Iberia, where Mr Walsh also demonstrated that he was not afraid to replace the CEO in order to push the airline to achieve.

While ensuring that each IAG subsidiary could stand on its own two feet, the group also introduced some centralised support functions and aircraft procurement in order to generate synergies.

Iberia CEO Luis Gallego to take over from Mr Walsh

Luis Gallego will take over as IAG CEO. Mr Walsh appointed Mr Gallego to run Iberia in 2013, after previously appointing him to set up and run Iberia Express in 2012.

Taking a leaf out of Mr Walsh's book, and helped by the success of both Iberia Express and Vueling as viable alternative growth platforms, he persuaded unions to come to new agreements with improved productivity.

The Air Europa acquisition is a near term priority

One of IAG's biggest near term priorities will be to complete the agreed acquisition of Air Europa. Unlike other group acquisitions, this will be plugged into Iberia, rather than the central holding company.

Mr Gallego's intimate knowledge of Iberia and the Spanish market should help the continuity of this process.

Mr Walsh undoubtedly leaves IAG in a robust condition, vastly improved from its more precarious state when he started as group CEO.

However, there are areas of weakness that Mr Gallego will need to address.

Restoring BA's brand will be a priority for Mr Gallego…

For all its financial success, the British Airways brand has suffered some tarnishing over recent years. This has been the result both of cost-driven proactive decisions and of crises such as IT power failure, cyber attacks on customer records and the unprecedented pilots strike of 2019.

Operational crises have dogged BA over the years, almost de-railing Mr Walsh's career in 2008 when the opening of the airline's new home at Heathrow Terminal 5 was badly botched.

…as will Heathrow runway expansion

British Airways could also be threatened by the expansion of runway capacity at its Heathrow hub, both as result of any increase in airport charges and increased competition that the new capacity could bring.

Managing IAG's relationship with the airport and lobbying the UK government will need significant attention from Mr Gallego.

Given that Mr Gallego's experience is mainly of Spain, he may give a higher profile in these areas to BA CEO Alex Cruz (also Spanish, but who has lived and worked in the UK for many years). Mr Cruz' public profile has tended to take a back seat to Mr Walsh. He was previously the man contender for Mr Walsh's successor, but he has borne the brunt of problems over the past couple of years at BA.

Mr Gallego may seek to boost IAG's presence in Asia

IAG's long haul network is strong across the Atlantic (North and South), it has the smallest Asia Pacific network among Europe's big three airline groups. IAG has a particular weak spot in China, the region's largest market.

It ranks as only the 11th largest airline group by seats between Europe and China in the week of 8-Jul-2019, according to data from OAG. BA's new joint venture with China Southern Airlines will help in this area.

IAG's Spanish airlines have not achieved the group's target ROIC

Although all four main IAG subsidiary airlines are making a return on invested capital above the group's estimated cost of capital of 10%, both Iberia and Vueling are remaining short of IAG's target of 15% (in the four quarters to Sep-2019, Iberia made 13.9% and Vueling 14.4%).

Moreover, after making significant improvements in ROIC during 2016 and 2017, progress has slowed.

Vueling has also suffered some brand dilution in recent years, partly as a result of high levels of disruption caused by ATC delays.

Mr Gallego will need to find ways to refocus Iberia and Vueling on achieving the ROIC target. The Air Europa acquisition should be positive for Iberia in this respect, although some short term disruption during the integration phase cannot be ruled out.

Mr Gallego also has a number of other strategic priorities

Mr Gallego's strategic 'to do' list will also include the growth of LEVEL, bringing Aer Lingus into the North Atlantic joint venture with American Airlines, further acquisitions in a consolidating market (and/or dealing with competitors that grow through acquisition), the impact of Brexit beyond the end of 2020 when the transition period expires and any macroeconomic slowdown or recession.

In addition, although Mr Walsh has already committed IAG to an ambitious carbon-neutral target by 2050, Mr Gallego will need to ensure that this can be achieved while also countering increasingly negative public perception by some about aviation's environmental impact.

Mr Walsh has earned the right to relax

Cynics may say that he knows it will be hard for IAG to keep improving its results, particularly if an economic slowdown turns into something more challenging.

It can also be said that Mr Walsh's highly focused, energetic management style requires 100% dedication. Having pursued it with considerable success for close to 20 years, he has earned the right to a more relaxed phase of his life. Whether he plans to exercise that right, we shall no doubt soon learn; relaxation and Mr Walsh do not readily co-exist in the same sentence.

CAPA salutes Mr Walsh's achievements, as one of the standout pioneers of the global airline industry. In 2017, CAPA welcomed Mr Walsh to its hall of fame, recognising him awarded as an Aviation Legend.

We congratulate and wish Mr Gallego well in his new appointment.