IAG sets ambitious goals for 2016-20, including regular dividend, and declares its confidence

IAG and its CEO Willie Walsh are becoming increasingly confident. The group's new plan for 2016 to 2020 aims to achieve operating profit margins in the range 10% to 14%, with each of the operating airlines also reaching this level. To illustrate how ambitious this target is, IAG's 2013 margin was 4.1% and British Airways' cyclical peak margin was 10.0% in 2007/08, before the merger with Iberia. The latter did not record a margin in excess of 8% in the decade before the merger and has been in loss since, although it should be back in profit in 2014. Vueling, the most profitable of IAG's airlines, recorded a margin of 9.7% in 2013.

The achievement of this margin range would allow IAG to beat its cost of capital. This would be rare in an industry that typically destroys value, an unfortunate fact that Mr Walsh recognises. Nevertheless, he says, "we are in this business to exceed our cost of capital and to remunerate shareholders". He identifies the keys to IAG's future success as capacity discipline and cost discipline.

IAG's recent capital markets day set out what it sees as the key drivers of profit improvement.

There were also presentations from heads of the Group's component business units; these will be the subject of future CAPA Analysis reports.

The progress made in 2014 suggests that there may be scope to beat the 2015 target and CEO Willie Walsh said that he was confident that the group could exceed it. Nevertheless, there may be some disappointment that IAG has not raised its goal for next year.

IAG identified four main drivers of the profit improvement from 2013 to 2015. First, was the continued restructuring of Iberia, under the heading "Transform Spain". Gains of around EUR300 million over the two years were expected as a result of unit cost reduction focusing mainly on labour productivity improvements as agreed with unions through the mediation agreement.

The second area, "Transform London", involved non-fuel unit cost reduction and fuel efficiency gains through new aircraft and was worth around EUR400 million. Third, synergy gains resulting from the closer integration of elements of the group's operating companies were expected to represent EUR190 million of profit improvement. Finally, EUR200 million of profit gains were targeted from the fourth area, the growth of Vueling and British Airways and the restoration of Iberia routes previously cut.

IAG's profit improvement in 2014 versus 2013 has been achieved in all four of these areas. At the end of 2014, Transform Spain will be more than half way through its planned 2013 to 2015 gains, while the other three areas will be roughly at the midpoint.

The remaining EUR430 million to EUR480 million of profit improvement necessary to reach the 2015 operating profit target of EUR1.8 billion will come from savings from new fleet, further productivity gains, completion of the 2011-2015 synergies programme and growth of the operating airlines.

In addition to further gains from the Iberia transformation plan in 2015, Transform London will include a focus on improving BA's short-haul asset turn – generating more revenues from its assets, without compromising its profit margin, thereby increasing its return on assets – and further reductions in ex-fuel unit cost.

The total synergies target for 2011 to 2015 has been increased once more from the figure of EUR560 million given in Nov-2013 to EUR700 million as a result of good passenger revenue performance. Planned growth in 2015 will include new routes for Vueling, the restoration of routes suspended by Iberia during its restructuring phase and limited growth by British Airways on long-haul. 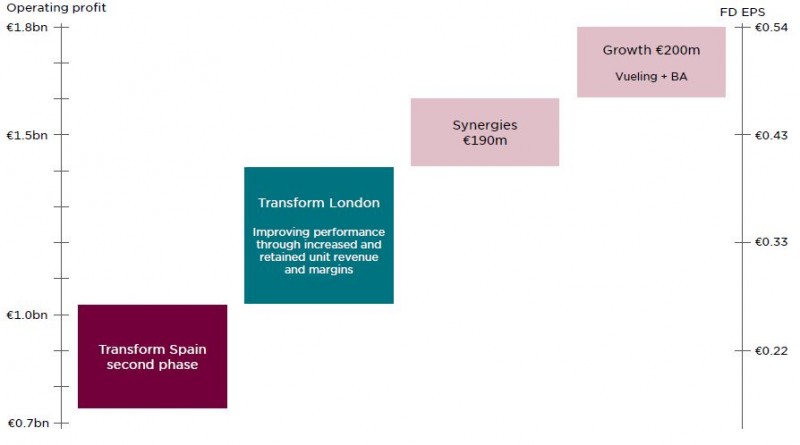 IAG's plan is based on jet fuel spot price of USD950 per mega tonne and EUR/USD at 1.35. Currently, jet fuel is closer to USD800/MT and EUR/USD has fallen to 1.26. If these current rates persist, IAG would benefit from a lower fuel bill, partially offset by the stronger dollar when fuel costs are translated into EUR. Moreover, it has a surplus of USD revenues versus USD costs and so the stronger dollar would give it a net benefit. IAG's plan does not incorporate current market rates, since movements have been volatile and it makes sense for it to err on the side of caution.

Turning to IAG's new plan, covering the period 2016 to 2020, it continues to see scope for further profit improvement in each of the four categories mentioned above. For Iberia, its 'Plan de Futuro' will focus on further labour cost efficiencies, laying the platform for its resumption of growth. BA expects to take the opportunity provided by its bmi slots and joint ventures to grow its long-haul business, while seeking improved efficiency of its hub operations.

Although the 2011 to 2015 synergies programme will come to an end, IAG sees significant scope for further group initiatives in areas including the Avios loyalty scheme, IAG Cargo, purchasing, business service and IT. It also expects further growth from the operating airlines, but stresses that its growth plans are flexible and it will only pursue profitable opportunities. 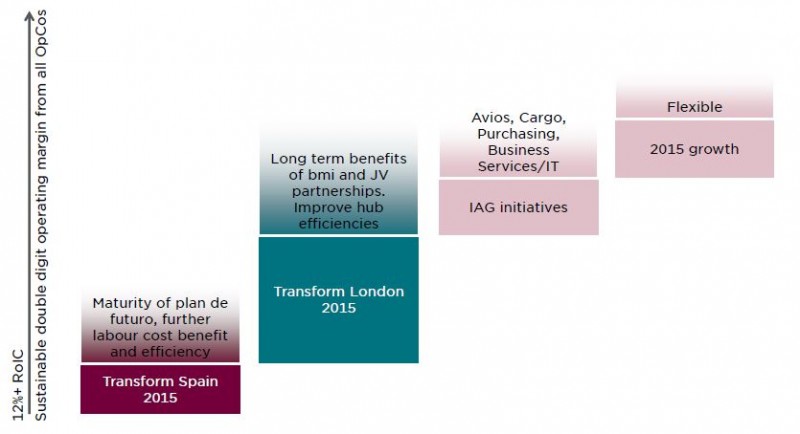 IAG is targeting an operating margin for the group in the range 10% to 14% in 2016-2020. It expects all of its operating companies to achieve double digit operating margins during the 2016 to 2020 plan.

BA's target of GBP1.3 billion in operating profit in 2015, if achieved, will take it close to a 10% margin even before this plan commences. Iberia expects to achieve margins in the IAG Group target range by 2017. IAG's target for return on invested capital (ROIC) is 12% or more in the 2016-2020 period.

Costs will continue to be the main source of increased profit

As before, IAG expects the lion's share of its profit growth to 2020 to come from cost efficiencies. The biggest source of expected profit gains is supplier unit costs, followed by fuel efficiency resulting from new technology aircraft. The group also expects further employee unit cost reduction. The balance of the targeted profit improvement will come from capacity growth and a part of this will be due to the increase in low cost capacity as a proportion of the total.

IAG plans for unit revenue to be flat through the plan. It seems sensible not to base any profit growth targets on unit revenue growth, which can be very volatile and not always controllable in the airline industry, although Mr Dupuy sees scope for some upside to this planning. For example, economic growth in the UK and US suggest that there could be a more positive unit revenue performance in these markets. 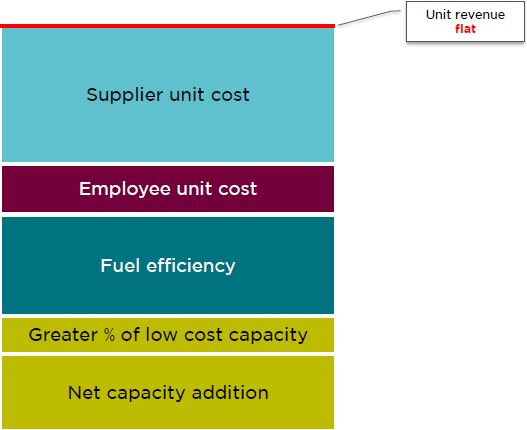 IAG plans for ASK growth in the range of 3% to 4% CAGR, slightly higher than the 3% rate indicated a year ago. This probably reflects increased confidence within all parts of the group, but in particular concerning Iberia's return to growth. Nevertheless, CEO Willie Walsh was keen to stress that IAG will "only go for profitable growth", a point that was also reinforced by the heads of BA, Iberia and Vueling.

New generation aircraft have been enabling long-haul growth, and replacing older aircraft, since 2012 and this process will continue through the 2016 to 2020 plan. BA is due to receive further A380 and Boeing 787 aircraft in addition to new A350s, while Iberia will take delivery of A350 and A330 aircraft during the course of the plan.

The group's short-haul fleet will grow through new A320 family aircraft until 2017 and through A320neo aircraft from 2018 (delivered to Vueling). 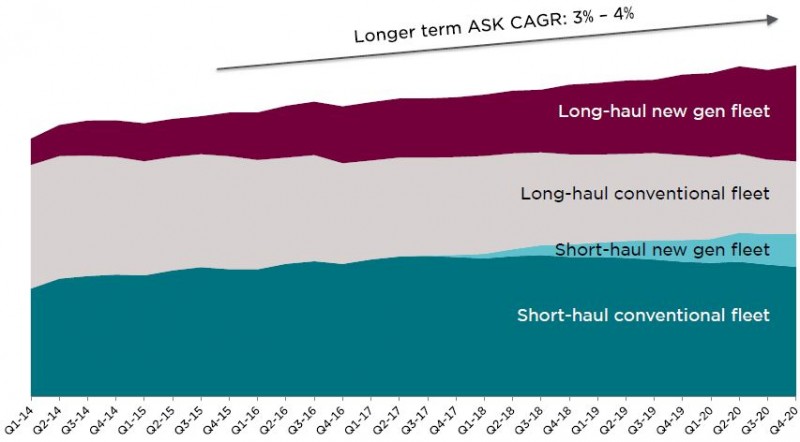 In emphasising that growth will only be pursued if it is profitable CFO Enrique Dupuy also highlighted the flexibility in IAG's fleet plan. Planned growth in the short-haul fleet will be at a CAGR of 3.8% from 2014 to 2020, but this could be reduced to -4.0% if demand conditions did not justify the growth. This minimum growth rate represents firm orders less retirements, while the higher rate planned by IAG involves leasing in additional aircraft, the exercise of some options over new aircraft and later retirements of old aircraft than under the minimum growth plan. 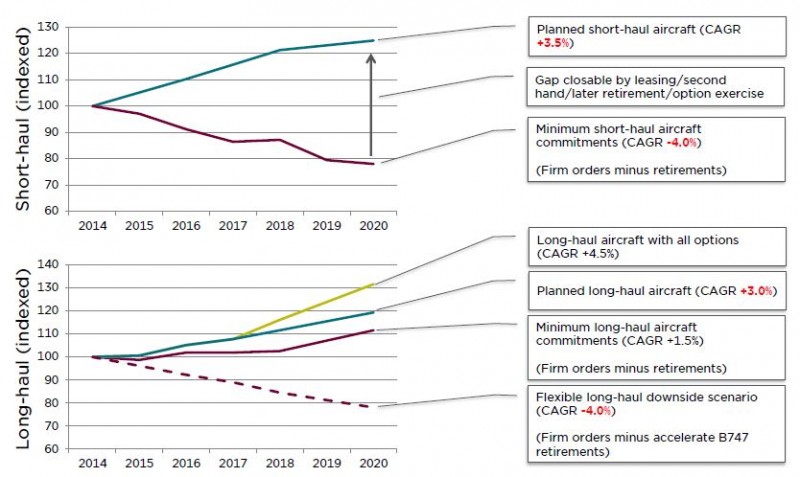 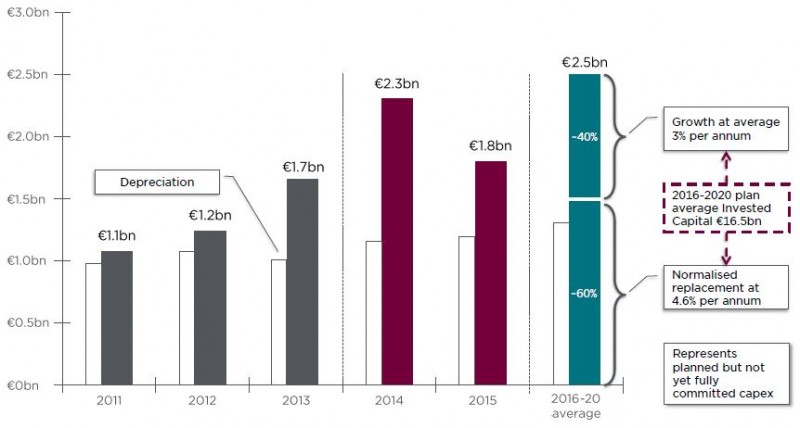 In spite of IAG's higher capital expenditure plans, it expects to generate sufficient cash flow from higher levels of profitability to fund this in addition to its leases, interest costs and tax payments. Moreover, it expects to have headroom above this to reinvest in the business, to reduce its debt levels and to return cash to shareholders. 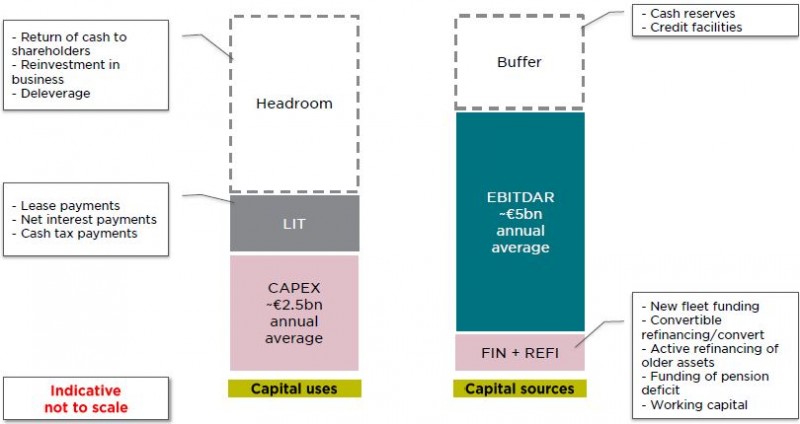 IAG has never paid a dividend and its predecessor companies, British Airways and Iberia, last paid dividends in 2008. However, IAG has now articulated a dividend policy aiming to make regular payments to shareholders, starting with the distribution of 25% of 2015's net profit.

The new policy allows for this payout ratio to change in the future and it must be assumed that IAG will look to increase it once it is established. Mr Dupuy said that he had stress tested the dividend model under conditions that modelled a RASK decline of 5% in a particular year and that it was robust (helped by the flexibility in its fleet plan).

The main targets of IAG's 2016 to 2020 plan are summarised in the graphic below. In addition to ASK growth of 3% to 4% pa, an operating margin in the range 10% to 14% and a pre-tax real ROIC of 12% (compared with a weighted average cost of capital conservatively estimated by IAG at 10%), it is targeting earnings per share growth of more than 10% pa.

It expects EBITDAR (earnings before interest, tax, depreciation and rentals for operating leases) to be around EUR5 billion pa and for its balance sheet gearing to improve sufficiently to bring it into investment grade rating territory. 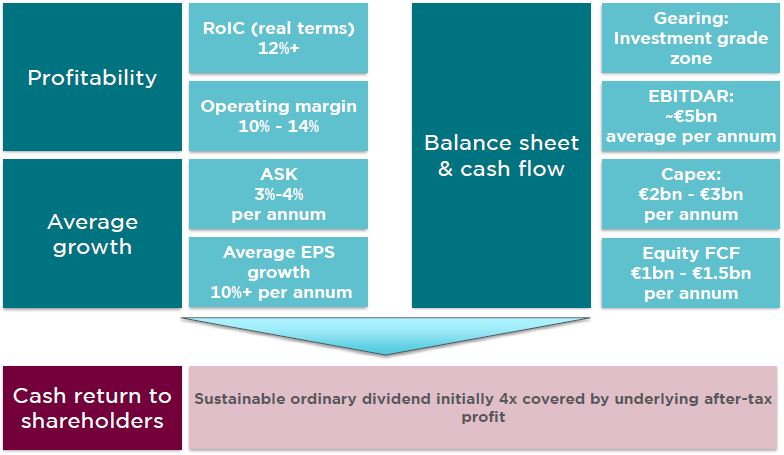 IAG's targets are certainly ambitious. Airlines are notoriously cyclical and returns tend to plummet in a downturn. European network airlines have not been able to sustain value-creating returns (ie where ROIC beats the cost of capital) through the full cycle. IAG is aiming to achieve this, to make regular dividend payments and to generate double digit earnings growth, while also lowering its debt levels.

However, while these targets are ambitious, IAG's progress since 2012 in particular suggests that they might be within reach. Expressing goals of this nature are currently beyond the reach of the other major European legacy airline groups, Lufthansa and Air France-KLM, as they grapple with industrial relations issues and resistance to the kind of restructuring with which IAG has already made progress. It is too early to declare IAG the winner in a race that is never complete, but it is the clear leader among Europe's Big Three.

As Mr Walsh said, when asked what advice he would give his counterparts at Lufthansa and Air France-KLM, "You've got to be clear about what you are trying to achieve and have the determination to do it".

His past successes, including addressing labour issues at BA and forcing Iberia's turnaround, underpin his confidence. The real test for IAG's ability to maintain the profitability that it targets will come from the next severe downturn, but it does seem to have constructed a business model with comparative flexibility and clarity of purpose.