IAG profit guidance is dropped after first quarter loss, but can it still reach its previous target?

These are challenging times for IAG. The only one of the European Big Three to report a wider operating loss for 1Q2013 and to see net debt increase year-on-year, it also took significant new labour restructuring provisions in connection with Iberia. It has also dropped its previous ambitious target of exceeding 2011’s EUR485 million operating profit in 2013 for the time being.

The first quarter operating loss was affected by two factors whose negative impact should fall away over the rest of the year: first, the lag between Iberia’s capacity cuts and headcount cuts and, second, by a mirror image factor at British Airways, namely headcount increases ahead of the introduction of the A380 and 787 later this year.

Nevertheless, five years after the global financial crisis and more than two years into the British Airways/Iberia merger, IAG will need to show it can still match its previous 2013 profit target if it is to allay growing doubts over its ability to reach its 2015 goal of EUR1.6 billion in operating profit.

In 1Q2013 IAG’s operating loss before exceptional items widened to EUR278 million from EUR249 million a year earlier. Its 1Q operating margin of -7.1% puts it between Air France-KLM (-9.3%) and Lufthansa (-5.4%), but IAG was the only one of the Big Three to see a fall in the margin. It was adversely affected by EUR67 million in relation to currency movements, which hit both revenues and costs negatively. The net loss widened to EUR630 million from EUR129 million after EUR311 million of restructuring provisions.

Revenue growth of only 0.5% was driven by growth in passenger revenues of 1.7%, offset by a fall in cargo revenues of 7.2% and a 4.4% decline in other revenues. Revenues were negatively affected by EUR46 million of adverse currency movements.

Passenger unit revenue was up 3.9% year-on-year in the quarter; this would have been 5.3% on a constant currency exchange rate basis. Looking at rolling 12 month unit revenues at constant currency, there has been an upward trend since 3Q2012 and IAG says it sees no sign that this trend will change.

This trend holds for both the passenger and the cargo business and reflects better matching of supply to demand by IAG and by competitors in the market place.

Unit revenues are strongest in North America and Europe, weak in Asia-Pacific and domestic markets

Passenger unit revenue performance varied by region in the quarter, with strength in Europe (ex domestic), North America and Middle East, Africa & South Asia. Latin America saw flat unit revenues, while Asia-Pacific and the two domestic markets saw falls. This domestic weakness reflects poor demand in Spain and was also affected by the integration of bmi in the UK (which also boosted capacity growth). Latin America was hit by the Iberia strikes.

Asia-Pacific unit revenue weakness, also reported by Lufthansa and Air France-KLM, was caused by the weak yen and new routes (in particular Seoul). IAG CEO Willie Walsh told analysts on a conference call to discuss the quarterly results that IAG is, “different from Lufthansa and Air France-KLM. The yen hits everyone, but they are more affected by the Middle East carriers than us as we have more point-to-point traffic and they have more hub connecting traffic”.

Regarding the ending of British Airways’ joint business agreement with Qantas on the ‘kangaroo route’ to Australia, Mr Walsh said there was no impact on BA. “Australia is a small market”, he said, adding that the benefits from BA’s change to the 777-300 on the route and the integration of its Australian operations into Terminal 5 at Heathrow outweighed any disadvantage from the loss of the Qantas agreement. He also sees it as an opportunity for BA to address the Australian market outside Sydney with other partners.

The strength of unit revenue to North America reflects capacity discipline in the market, where the group cut capacity by 4% year-on-year. Mr Walsh does not see any need to adjust capacity upwards and argues that capacity discipline by all players has been a positive feature of the market, leading to unit revenue improvements. “I don’t see anybody doing anything silly – quite the opposite”, he said, referring to the possibility of a competitor breaking ranks to chase market share gains, although he admitted IAG would defend strategic markets if necessary. 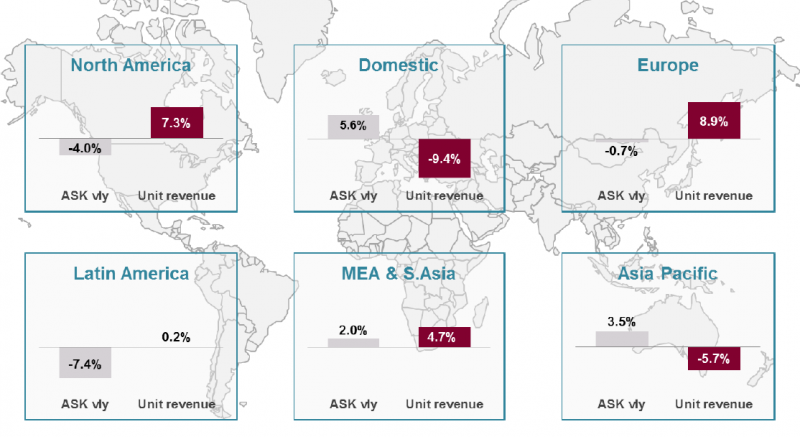 Looking at passenger unit revenues and traffic (RPK) by cabin, premium unit revenues grew by 2.2% at constant currency while traffic volume fell slightly. This was adversely affected by the move of Easter from April last year to March this year and by the Iberia strikes.

Non-premium unit revenue grew by 8.0% at constant currency, with volume also slightly down. 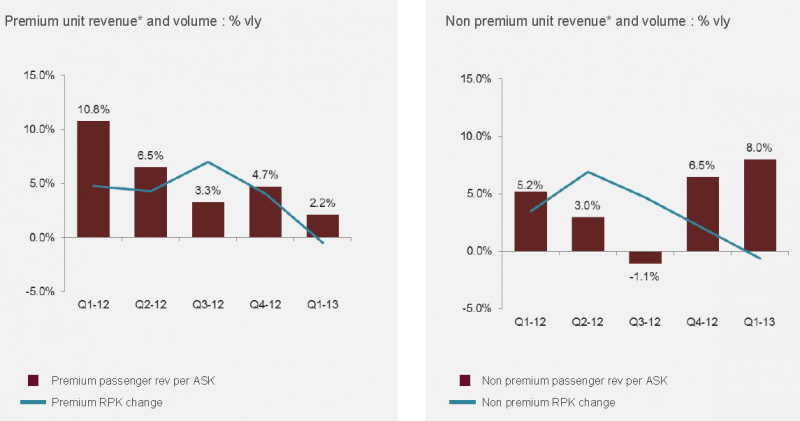 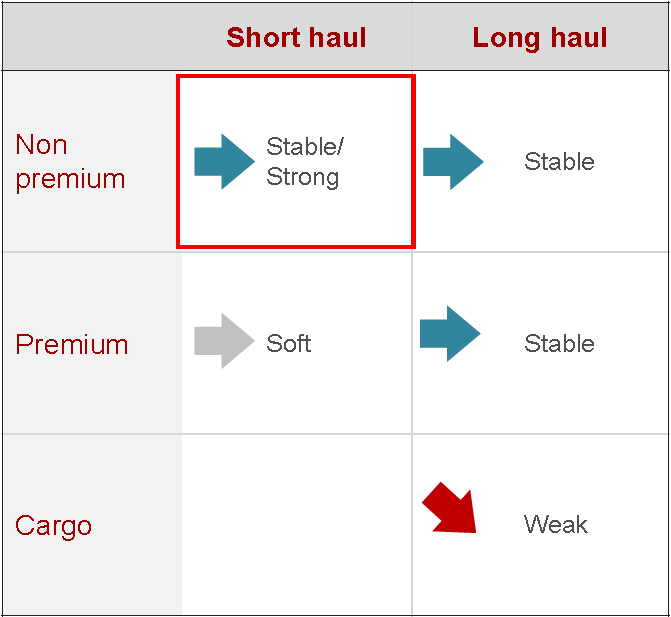 Costs grow faster than revenues, but short-term issues will fade later this year

Operating costs before exceptional items for the quarter were up 1.2%, faster than revenue growth, to EUR4,217 million. Costs were negatively affected by EUR21 million of adverse currency movements. Fuel costs fell 3.4% to EUR1,361 million.

The impact of these factors should turn more positive later in the year. There was also some cost related to promotional activity for the Avios loyalty scheme and BA Holidays. 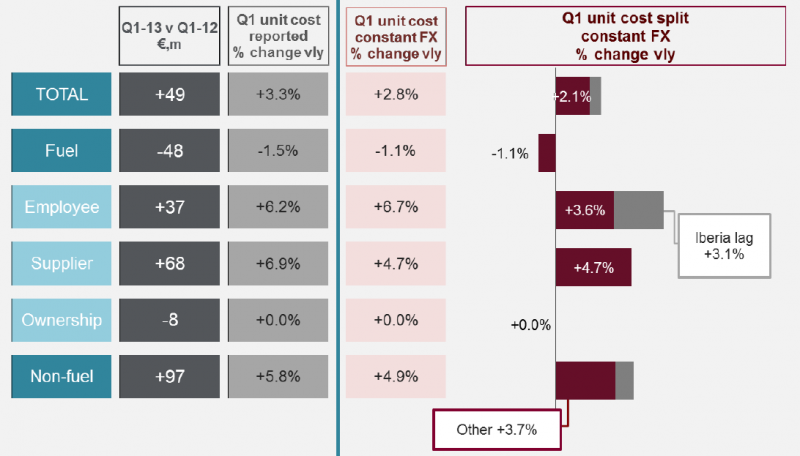 Additional labour restructuring provisions of EUR265 million were taken in the quarter, bringing the total labour restructuring provision to EUR467 million. This followed the Iberia mediation agreement of 13-Mar-2013, which allowed for headcount reduction of 3,300, or 17% of the baseline 2012 Iberia workforce, and an average salary cut of 11% initially (7% ground and 14% flight crews). The agreement provided for an additional 4% salary cut if April productivity talks failed and this was subsequently imposed.

The headcount reduction has begun, with 1,400 people exited as of end of May and 80% of total redundancies by the end of 2013. IAG expects to achieve a gross labour cost saving by 2015 of around EUR360 million.

IAG anticipates that Iberia will see a “substantial reduction” in its operating loss in 2013 versus 2012, and to halt cash burn from 2H2013, as a result of labour cost savings (it expects a unit labour cost reduction of around 3% for Iberia this year) and lower fuel costs. The group also says that cost savings will have to be augmented by unit revenue improvements to achieve Iberia’s “Transformation Spain” operating result turnaround plan of EUR450 million between 2012 and 2015.

There were also restructuring costs of EUR47 million in the quarter, associated with the return of leased aircraft and standing down owned aircraft.

At its FY2012 results announcement in Feb-2013, IAG set a bullish target to exceed 2011’s EUR485 million operating profit in 2013 (versus a EUR23 million loss in 2012. IAG has now decided not to give profit guidance for FY2013 due to the requirement for the group to seek shareholder approval for recently announced BA fleet replacement orders and the consequent requirement to report on any outstanding profit forecast as part of that process.

The date for the shareholder meeting to approve the aircraft orders has not yet been set, but it is expected for some time in Sep-2013. In the meantime, IAG has provided the following statement on the outlook: “Current trading is in line with our expectations. For 2013, excluding Vueling, we expect to reduce Group capacity by 1.8%, and keep non-fuel unit cost flat versus last year.” 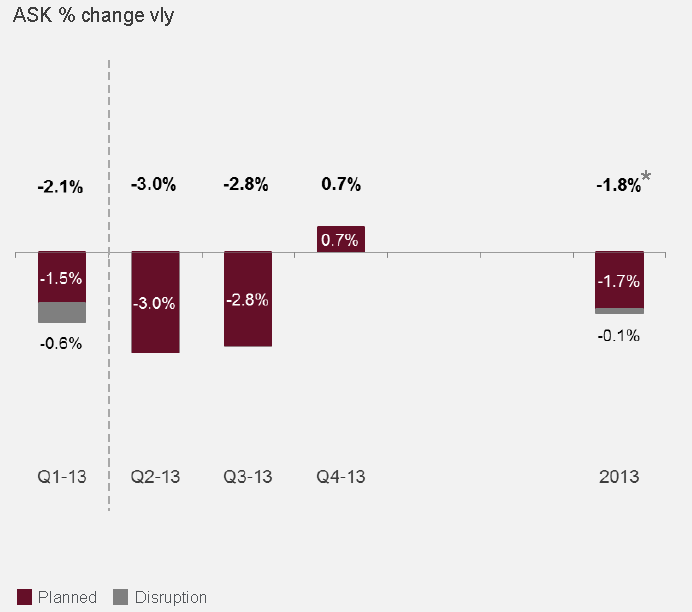 *Capacity plan does not include Vueling
Source: IAG

Vueling to be consolidated from May-2013, but will remain a standalone operation

Mr Walsh reiterated previous comments that Vueling will be run as a stand-alone business within the group. There is potential for some synergies and a joint ground handling contract has already been tendered at Paris Orly, for example, but this was not a factor in taking the decision to buy Vueling. 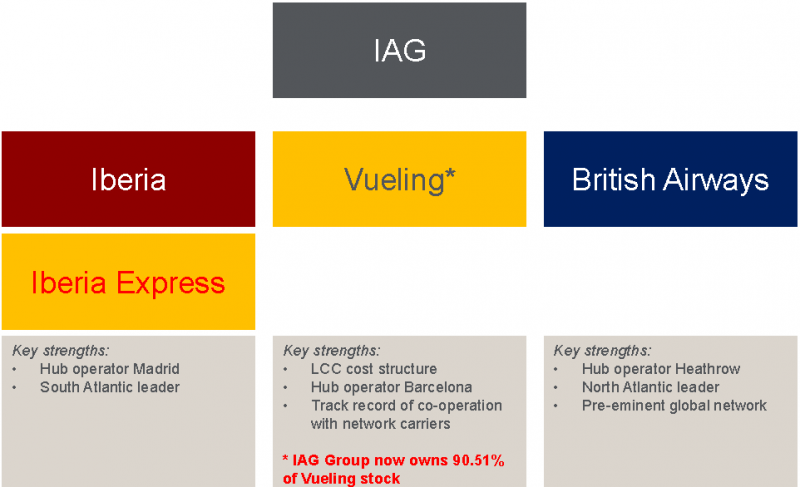 A new CEO for Iberia

Since 27-Mar-2013, Iberia has had a new CEO, Luis Gallego, who was previously the founding CEO of Iberia Express (2012 to 2013). A graduate in Aeronautical Engineering of the Technical University of Madrid and of IESE Business School, he spent nine years at Air Nostrum before moving to the start-up Clickair as COO in 2006.

He joined Vueling in 2009 upon its merger with Clickair (PDD). Mr Gallego’s first task as Iberia CEO has been to implement the mediator’s labour proposals, but Mr Walsh expects him to bring greater commercial discipline to Iberia, with a focus on profitable routes and not just market share. 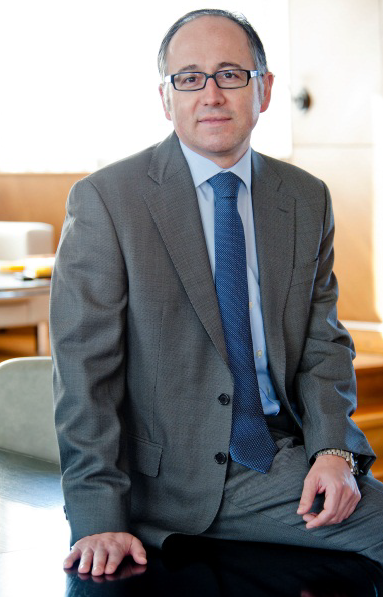 IAG’s limited guidance for FY2013 no longer provides profit guidance, but what it has said still allows the possibility that it can achieve its previously announced (and ambitious) target of exceeding 2011’s EUR485 million operating profit in 2013. It says that capacity will be down by 1.8%, a little less than the 2.1% cut in 1Q2013 when revenues grew by 0.5%. It has not given guidance on unit revenues, but has said that it expects positive unit revenue trends to continue. Making the fairly conservative assumption that total revenue growth for the year is 0.5%, the same as in the first quarter would add around EUR90 million to FY2012 revenues in FY2013.

Taken with IAG’s expected EUR300 million reduction in the fuel bill, its guidance could add up to a total operating profit improvement of EUR590 million, enough to take it from last year’s EUR23 million loss to more than 2011’s EUR485 million operating profit in 2013.

This remains subject to many things going well for IAG, including completing the Iberia restructuring programme, capacity discipline continuing to hold in the market and having no other one-off disruptions, but it is not unlikely that it remains IAG’s target, even if it cannot say so.