IAG's financial results for 1Q2016 are the first indication from a leading European legacy airline group of how this year is working out financially. For IAG the seasonally weak first quarter went well, with operating profit increasing by more than six times and the net result recording a rare positive figure.

Unit revenue weakness, seen in 2015, continued into 1Q2016 and accelerated its fall after the Brussels terrorist attacks. Coming relatively soon after the Paris attacks, this event may have a slightly longer impact than previous incidents of this nature. IAG's unit cost fell more rapidly than unit revenue, thanks to lower fuel prices. With pricing expected to remain a little softer than previously anticipated, IAG is accelerating cost measures and expects underlying ex fuel unit cost to fall by 1% in FY2016.

IAG still expects more than EUR900 million of year-on-year operating profit improvement in 2016, with a further margin increase. The IAG group is already the most profitable of Europe's three leading legacy airline groups, and the gap looks set to widen this year.

In 1Q2016 IAG reported a net profit of EUR104 million, turning around a loss of EUR26 million in the same period a year earlier. This was its first net profit in the seasonally weak first quarter since IAG's creation in 1Q2011 (profit that was only achieved thanks to a non-recurring accounting item related to the merger). It follows last year's first ever 1Q operating profit for IAG.

IAG's 1Q2016 pre-exceptional operating profit was EUR155 million, more than six times the EUR25 million result of a year earlier. Revenue increased by 8% to EUR5,078 million and the operating margin improved by 2.5ppts to 3.1%. 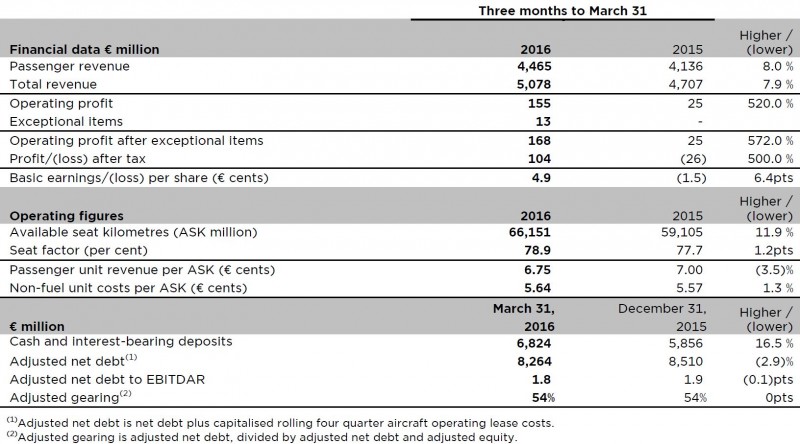 Group ROIC closing in on 15% target

The group's return on invested capital over the four quarters to 1Q2016 was 13.7%, which compares with 8.4% for the equivalent rolling four quarter period a year earlier. This ROIC performance is comfortably ahead of IAG's estimate of its weighted average cost of capital of 10%, and edging closer to its medium-term target ROIC of 15%. 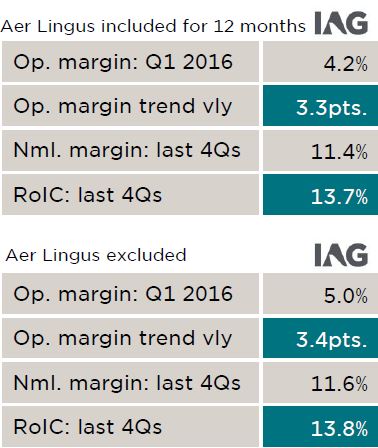 Three of the IAG airlines, British Airways, Vueling and Aer Lingus, achieved a return on invested capital above the group's 10% cost of capital in the four quarters ending with 1Q2016. The ROIC over this period for all three was 12.6%, while Iberia remained short of the others, with 8.9%.

Nevertheless, Iberia's ROIC had improved significantly from 5.5% a year earlier. Indeed, the IAG CFO, Enrique Dupuy, told analysts on a conference call to discuss the 1Q2016 results that he was confident that the Plan de Futuro would bring the Spanish airline's figures up to its targets.

BA's performance also compared favourably with the 8.5% ROIC reported for the prior year period. In the case of Vueling, however, the airline's ROIC declined slightly from a level of 13.1% achieved in the four quarters to 1Q2015. 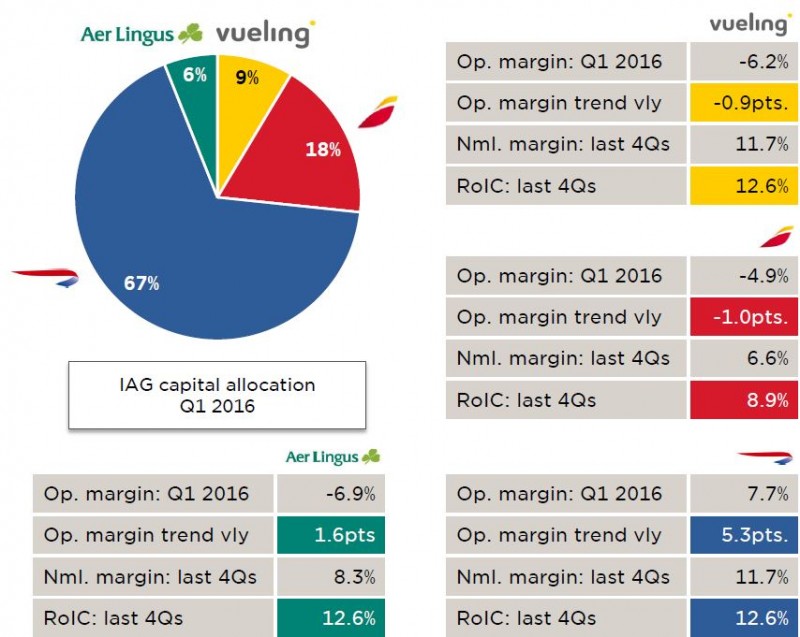 As a result of slightly weaker than expected demand following the Brussels bombings, this ASK growth has been trimmed from the 5.3% previously planned. The lower capacity plan comes from lower frequencies by both BA and Iberia to São Paulo and Rio de Janeiro and the cancellation of Iberia services to Luanda, Lagos, Accra and Istanbul. 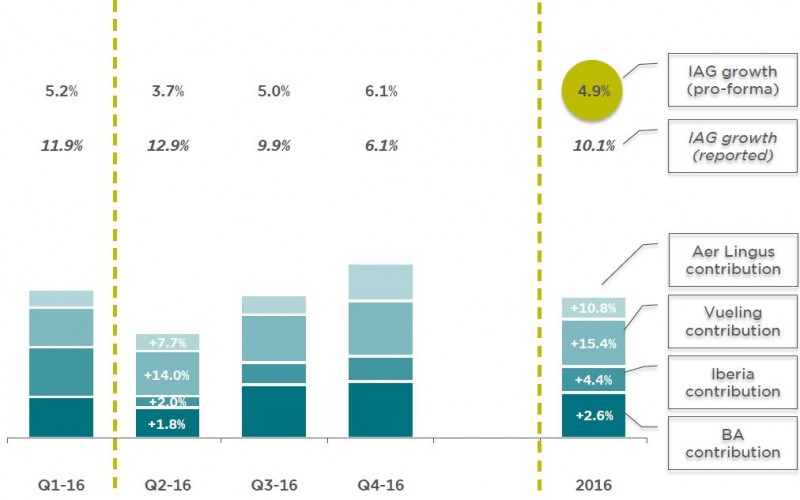 Vueling will continue to grow fastest in 2Q2016

For BA, the planned 2Q2016 ASK growth of 1.8% will be driven by new long haul routes launched since 2Q2015 (Kuala Lumpur, San Jose, Gatwick-JFK and Lima) and some frequency growth (Las Vegas, Shaghai and Dubai). Iberia's 2Q2016 ASK growth of 2.0% will mainly come from new and restored routes (Havana, Cali/Medellín).

For Vueling, new routes to the UK from Barcelona will be the main driver of 2Q2016 ASK growth of 14.0%. The principal source of Aer Lingus' 2Q growth of 7.7% will be its new route from Dublin to Los Angeles. 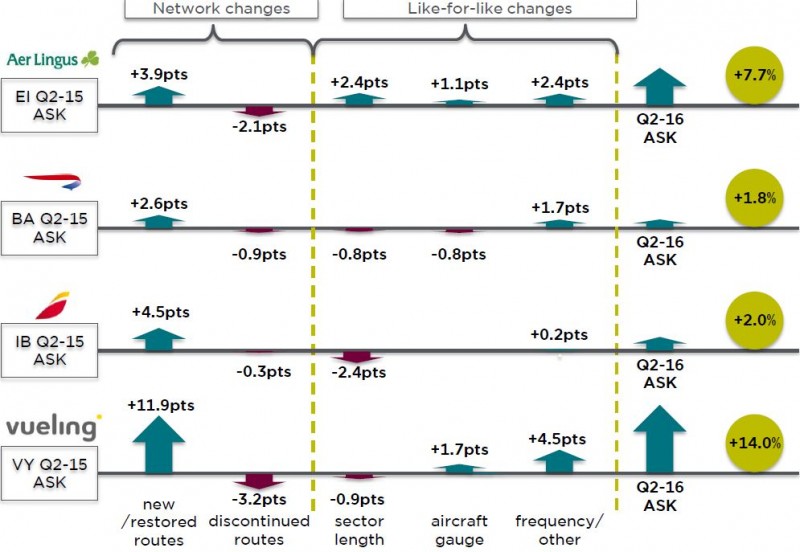 IAG's like-for-like ASK growth of 4.8% year-on-year excluding Aer Lingus masks very different levels of growth in each region. The fastest growth was in Asia Pacific: +14.1%, boosted by BA's Kuala Lumpur launch in May-2015 and frequency increases to Shanghai.

There was also strong growth in Europe (+11.7%) and the domestic markets (+9.7%). This short/medium haul capacity growth was mainly driven by Vueling in Rome and Barcelona, but also by Iberia's increased frequencies to Las Palmas and Tenerife.

ASK growth to both North America and Latin America was 2%, while IAG cut capacity to Africa, Middle East and South Asia (AMESA) by 2.5%. 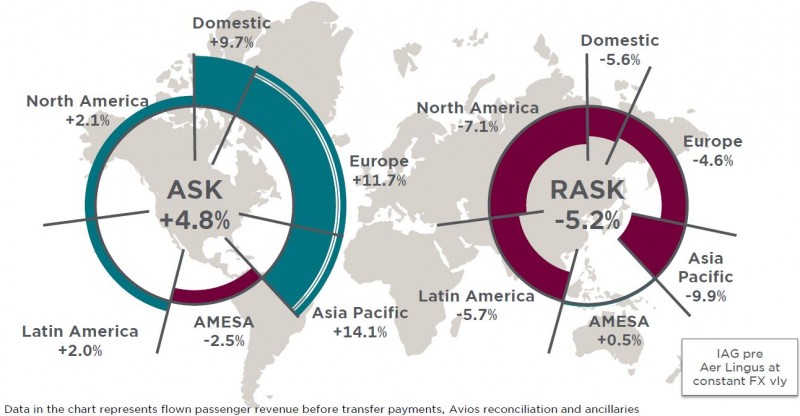 RASK weakness in almost all regions

Passenger unit revenue at constant currency was also weakened by fare pressure on oil-related routes resulting from lower fuel prices, and lower corporate client activity as a result of the shift in Easter into 1Q from 2Q last year.

This underlying RASK performance was weakest in the region with the highest ASK growth, Asia Pacific, where it was down by 9.9%. BA's new Kuala Lumpur route was a factor in the dilution of RASK to the region.

There was also a significant fall in underlying RASK on routes to North America (-7.1%) and Latin America (-5.7%), in addition to short/medium haul routes. Only AMESA managed a stable unit revenue performance (+0.5%).

In spite of unit revenue weakness on the North Atlantic –  one of IAG's most important markets –  IAG CEO Willie Walsh told analysts on the 1Q conference call that the joint venture with American Airlines was performing well, and that he expected this to continue.

He added that he was comfortable with the capacity outlook in IAG's core North Atlantic markets and that bookings into 3Q2016 were particularly strong. Nevertheless, IAG could adjust capacity where necessary.

"We already have the best long haul low cost operator"

Mr Walsh was also comfortable with competition from low cost airlines on long haul markets such as the North Atlantic. "We already have the best long haul low cost operator," he said, in a reference to Aer Lingus, which was "doing better than Norwegian".

Mr Walsh said that Aer Lingus was expected to join oneworld and the North Atlantic JV at some point in 2017.

He argued that IAG could compete effectively with Norwegian, pointing out that BA had initiated a service from Gatwick to New York JFK in direct competition with Norwegian.

Other revenue increased by 15.1%, reflecting the performance of BA Holidays and Iberia's external maintenance business.

Operating costs increased by 5.1%, less than the growth in ASKs and revenue. Fuel costs fell by 14.3%, due to lower fuel prices after hedging. According to Mr Dupuy, unit revenue weakness meant that only around 50% of the benefit of lower fuel costs was retained in profit terms.

Ex fuel costs increased by 13.3%, which was faster than both ASK growth and revenue growth.

Labour costs, now the biggest category after the fall in fuel costs, grew by 9.1% but this figure was 2.4% excluding Aer Lingus. Average headcount increased by 5.7%, mainly reflecting the addition of Aer Lingus, but this was less than ASK growth. Labour productivity (ASK per employee) improved by 5.9%, with improvements at all group airlines.

Overall, then, IAG is keeping a lid on underlying ex fuel unit cost, but owes the reduction in total unit cost entirely to lower fuel prices.

Although IAG has modestly trimmed its ASK growth plan for the year, from 5.3% to 4.9% on a pro forma basis (ie including Aer Lingus in last year's figures), it still expects to generate an absolute operating profit increase in 2016 similar to that achieved in 2015. This would mean an increase of around EUR945 million, taking the operating profit to almost EUR3.3 billion in 2016.

IAG said that 2Q2016 revenue trends were being affected by the aftermath of the Brussels attacks and that there was some softness in underlying premium demand, although 3Q2016 bookings look strong.

"Self help" increases the margin gap with "peers"

IAG expects the consequent RASK weakness to be offset by a 1% decline in underlying ex fuel unit cost and lower fuel prices. According to Mr Walsh (on the analyst call), revenue softness is leading IAG to accelerate cost initiatives, describing this as "self help".

Mr Walsh was confident that IAG's focus on unit cost would ensure that there is further margin growth in 2016. Moreover, he expects the gap with peers to continue to widen. A considerable distance has opened up between IAG and groups such as Lufthansa and Air France-KLM in terms of profitability.

Indeed, in a reference to Europe's other legacy airline groups, Mr Walsh emphasised IAG's continuing leadership by saying, "I am not sure I would call them peers". There would seem to be a growing confidence gap, too.