With its 2Q2015 results, IAG took another step towards achieving its longer term financial targets. Its 2Q operating profit grew by 39% year on year and its rolling 12M return on invested capital increased by 0.7ppts. Both revenue and operating costs were inflated by currency movements, with a net positive impact. Nevertheless, adjusting for foreign exchange, IAG cut unit cost at a faster rate than the drop in unit revenue.

At the level of the operating airlines, both BA and Iberia enjoyed improved operating profits. Vueling remains the most profitable airline in the group, but the Spanish LCC's result dipped slightly. Its business is highly seasonal and 3Q should be its strongest quarter, so it still has a chance to end the year with better figures.

IAG's results for the quarter were again stronger than those of its major European legacy airline group rivals Lufthansa and Air France-KLM. Its growing confidence is reflected in its decision to exercise options with Airbus for additional narrowbody and widebody aircraft, including up to five A330-200 growth aircraft for Iberia. 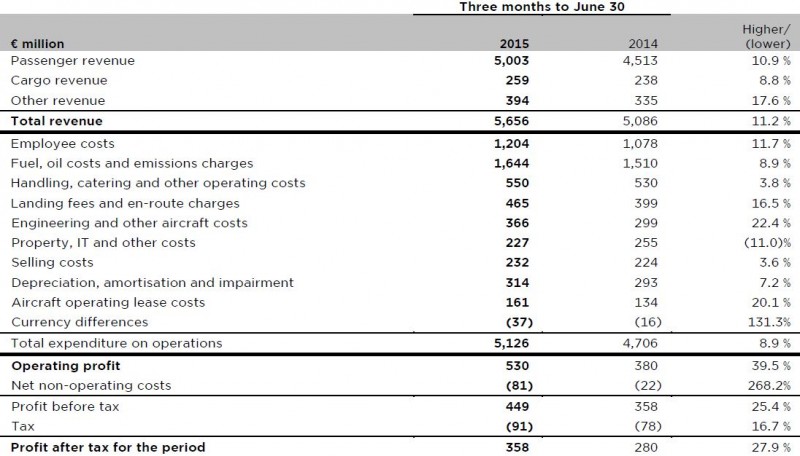 Both of the legacy airlines in the group improved their 2Q result versus the same period last year, but Vueling suffered a modest fall in its profitability. British Airways increased its operating profit by GBP50 million to GBP323 million, in spite of a 2.4% decline in revenue. Iberia's operating profit was up by EUR35 million to EUR51 million, on revenue growth of 12.9%.

By contrast, Vueling's 2Q2015 operating profit dipped by EUR6 million to EUR24 million, although its revenue increased by 10.7%.

However, Vueling's rolling 12M ROIC for these periods dipped from 13.1% to 11.9%. Although Vueling is still generating the highest returns among the group's airlines, its ROIC has fallen below the group's 12% target and IAG will no doubt be anxious to reverse its negative momentum.

CFO Enrique Dupuy said at a presentation to analysts, "Q2 has not been good quarter for Vueling, but we are not too worried". He explained that 2Q is not the "preferred quarter" for Vueling, which has a very marked seasonal pattern. "So let's wait for Q3", he said, noting also that IAG was seeing improving bookings in the Spanish market into 3Q2015.

Employee cost per ASK fell at BA and Iberia, but it increased at Vueling. Vueling agreed wage increases in 2014, but the year on year growth in its employee cost per ASK will stabilise from 4Q2015. Vueling CEO Alex Cruz added that Vueling was continuously taking costs out of the business. 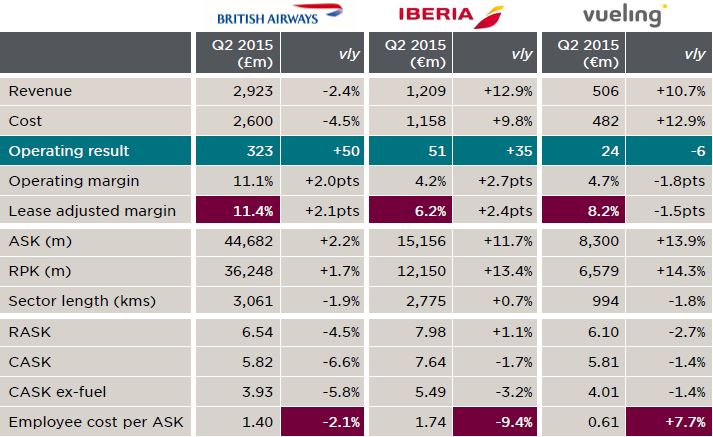 IAG increased its ASKs by 5.5% in 2Q2015 and this rate of growth was matched by RPKs, so that passenger load factor was flat year on year at 80.7%.

ASK growth was double digit for both Vueling (+13.9%) and Iberia (+11.7%), both of which achieved modest load factor gains. Although British Airways grew its ASKs at the slower rate of 2.2%, its RPK growth of 1.7% was slower still, leading to a small drop in load factor.

Vueling's growth this year is primarily driven by new routes from Rome and Barcelona, although it is also adding frequencies to existing routes and part of its growth is offset by discontinued routes. The main driver of Iberia's growth is new routes, including the restoration of routes that it discontinued during its restructuring (for example, Havana, London Gatwick and Cali/Medellin). For BA, capacity growth in 3Q is driven more by increased aircraft gauge, although new routes (Kuala Lumpur) and higher frequency (Larnaca, Tel Aviv) also make a contribution. 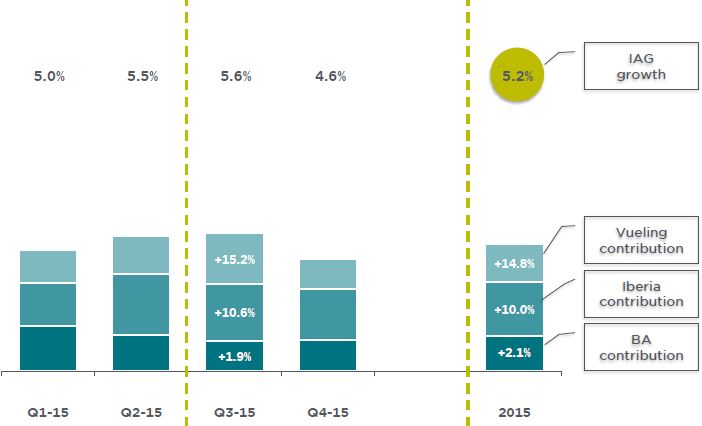 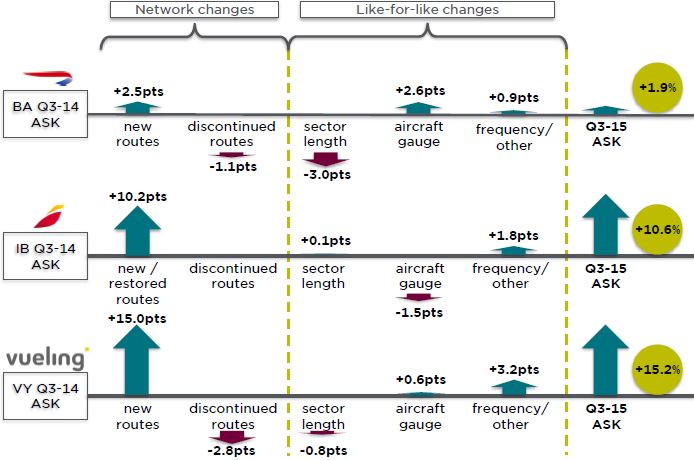 New routes are routes that were not operated for the whole period last year
Source: IAG

The group's 2Q2015 ASK growth was highest in Europe (+14.4%), principally due to Vueling and Iberia Express, but also some seat densification on BA's narrowbody fleet. The group also grew rapidly on routes to Latin America (+8.3%), primarily due to Iberia's restored routes, and Asia Pacific (+6.4). In its domestic markets, IAG's ASKs were up by 5.9%, mainly reflecting Vueling's expansion.

Capacity to North America was up modestly (+1.5%), while smaller aircraft on BA routes to India were the main driver behind a 3.9% ASK cut in Africa, Middle East and South Asia (AMESA).

With load factor stable for the group, the decline in passenger RASK at constant currency reflects deteriorating underlying yields. IAG attributed yield weakness to capacity growth at Vueling and Iberia and to BA's exposure to weakening oil routes and increased competitor capacity on the Atlantic.

Total revenue grew by 11.2% year on year in 2Q2015, faster than capacity growth, but this was driven by a EUR633 million boost from foreign exchange movements. In particular, revenue generated in GBP and USD translates into a higher number of EUR when EUR weakens against these other currencies.

Total revenue per ASK (RASK) was up by 5.3%, but, at constant currency, RASK fell by 6.5% in 2Q2015. Forward bookings into 3Q2015 show strong growth in US point of sale trans-Atlantic bookings, which generate USD revenue and will be positive for revenues reported in EUR.

Operating costs increased by 8.9%, faster than capacity growth, but slower than revenue growth. Costs were also inflated by foreign exchange movements, to the extent of EUR579 million. The net impact of currency movements on 2Q operating profit was positive by EUR54 million.

Fuel costs increased by 8.9%, faster than ASK growth as IAG's hedging programme and the stronger USD versus EUR more than offset lower USD-denominated market prices for jet fuel. IAG will benefit more from lower fuel prices as the year progresses (and into next year).

Ex fuel costs also grew by 8.9%. Labour costs were up by 11.7%, in spite of flat average headcount, mainly as a result of the weaker EUR compared with key labour cost currencies (in particular GBP).

IAG's guidance for FY2015 operating profit is unchanged at "more than EUR2.2 billion" (compared with EUR1.4 billion in 2014). This target is maintained in spite of slightly lower ASK growth of 5.2%, versus 5.5% previously planned (mainly due to the trimming back of Vueling's growth, although this will still be double digit). 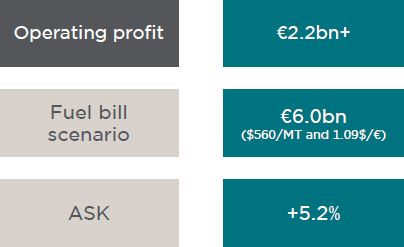 IAG's confidence in the future continues to grow

Looking further ahead, IAG has modestly increased the long term planned capacity growth rate for Iberia. For the period 2015 to 2020, IAG now plans ASK growth for the Spanish legacy airline at a compound average growth rate of 7.0% pa, compared with 6.5% pa previously.

These decisions on fleet and on Iberia's long-haul growth, together with the progress towards IAG's financial targets achieved in its 2Q2015 results, again highlight its confidence in the future.