Results for 3Q2015 again demonstrated IAG's superior profitability compared with rivals Air France-KLM and the Lufthansa group. IAG's 3Q operating margin of 18.5% was around 6ppts higher than those of the other two. However, all three enjoyed sharp year on year improvements in profits, mainly thanks to lower fuel prices. Both IAG and Lufthansa raised their FY2015 profit targets, but Air France-KLM has not gained sufficient confidence to set a target for the year, in spite of posting the greatest increase in operating profit in 3Q.

The unit revenue environment continued to be weak for Europe's big three legacy airline groups, although it improved slightly in 3Q2015 relative to 2Q. This weakness partly reflects a hazy economic outlook and partly reflects strong levels of competition, particularly on routes to emerging markets. Unit revenue weakness is also a function of management decisions on capacity growth. On the North Atlantic, where capacity growth is tightly contained and competition is less fierce, unit revenue weakness has been more limited.

IAG has the highest operating margin, Air France-KLM's the weakest, despite improvement

The revenue and operating profit figures in 3Q2015 and 9M2015 for the big three are shown in the table below. The IAG result included Aer Lingus for the first time (from 18-Aug-2015), with a contribution of EUR45 million to the group operating profit of EUR1,250 million in 3Q. The Lufthansa group's operating profit also exceeded EUR1 billion (it was EUR1,142 million), while Air France-KLM reported EUR898 million in 3Q.

IAG reported the highest operating profit and operating margin, but the strongest improvement in 3Q margin was achieved by Air France-KLM, whose operating profit as a percentage of revenue increased by 8.4ppts to 12.1%. This increase however mainly reflected its weak prior year performance, which was severely hit by a pilot strike.

In spite of its improvement, Air France-KLM's margin was still the weakest of the three, just behind Lufthansa's 12.1% (Lufthansa's results from equity investments from its preferred reported measure of adjusted EBIT are excluded, in order to make it more comparable to the others' operating profit figures).

ASK growth is highest for IAG

Capacity growth continued to be fairly modest among the big three, with IAG increasing its ASKs by 5.3% year on year in 3Q2015 (excluding Aer Lingus) and the other two at less than half this rate. IAG's growth was driven by double digit ASK increases for Iberia (+10.7%) and Vueling (+13.8%), while the largest airline in the group, British Airways, grew by only 1.7%. Iberia's growth continues to be mainly due to restored routes following its restructuring, while LCC Vueling continues to add new routes.

The Lufthansa group's total ASKs were up by 2.4% year on year in 3Q2015. This consisted of 2.0% growth by Lufthansa Passenger Airlines (including Germanwings), 3.7% growth by SWISS and just 0.9% by Austrian. 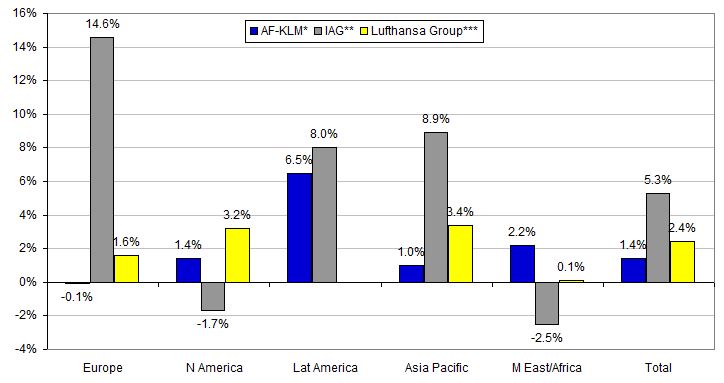 IAG's growth was strongest in Europe, where the group's ASKs increased by 14.6% year on year in 3Q2015 (this does not include IAG's domestic markets, where growth was 6.4%). This was the highest capacity growth in any region by any of the big three and mainly reflected Vueling's expansion from bases in Rome and Barcelona.

By contrast, the Air France-KLM group cut its ASK capacity in Europe by 0.1% overall. This comprised a 1.9% cut by the group's network airlines (Air France, KLM and Hop), while Transavia grew by 3.4%. Within the network airlines' medium haul operations, there was a 12.7% reduction in point to point capacity and an increase of 1.1% in hub capacity.

The Lufthansa group increased ASKs in Europe by 1.6%, although Lufthansa Passenger Airlines itself (including LCC Germanwings) raised its European by only 0.8%.

Among the major long haul markets, capacity growth remained fairly cautious by the big three on the North Atlantic. IAG cut its ASKs to North America by 1.7% year on year on 3Q2015, while Air France-KLM added just 1.4% more ASKs. Lufthansa does not disclose separate figures for North and South America, but its ASK growth of 3.2% for the Americas mainly reflects the North Atlantic, which is much larger than its South Atlantic business.

Capacity growth was stronger in Latin America, where IAG's ASKs increased by 8.0%, mainly the result of Iberia's resumption of growth after its restructuring, while Air France-KLM's Latin American network grew by 6.5% in ASK terms.

All three increased their capacity to Asia Pacific in 3Q at growth rates broadly consistent with 1H. IAG's 8.9% ASK growth to the region was driven by BA's new Kuala Lumpur service and an increase in capacity to cities such as Tokyo (Haneda) and Seoul (note that IAG's traffic data puts South Asia with Middle East and Africa and not with Asia Pacific). The Lufthansa group grew by 3.4% and Air France-KLM by 1.0% in Asia Pacific.

All of the big three were fairly cautious with capacity growth to the Middle East/Africa (including South Asia for IAG). IAG cut its ASKs by 2.5% and Air France-KLM grew by just 0.1%, while Lufthansa's growth was only 2.2%.

RASK: declines across the board, but at a lower rate in 3Q vs 2Q

Unit revenue weakness has occurred for all of the big three in every quarter this year, with each reporting falling revenue per ASK at constant currency (and, in the case of Air France-KLM, adjusted for the impact of last year's strikes). However, 3Q2015 was an improvement on 2Q2015 in that constant currency RASK fell at a slower rate for all three.

Among the three, IAG suffered the biggest fall in constant currency RASK in 3Q2015 (as was the case in 2Q2015), possibly reflecting its higher rate of capacity growth, with a drop of 3.3% compared with -2.6% for Air France-KLM and -1.9% for the Lufthansa group. Given IAG's faster capacity growth, its RASK performance compared with the other two was not too bad. Nevertheless, it will need to ensure that capacity growth is disciplined.

Unit revenue weakness was least severe on the North Atlantic in 3Q2015, reflecting cautious capacity growth and the importance of the three immunised joint ventures, in which each of the big three is a leading member.

Both Air France-KLM and IAG limited their decline in constant currency RASK to around 2% on routes to North America, while Lufthansa managed to keep this measure at just above last year's level (+0.4%).

By contrast, Latin America was the weakest long haul market: here, Air France-KLM's RASK fell 9.4% and IAG's fell 4.4% (Latin America is not separately reported by Lufthansa). Asia Pacific and Middle East/Africa were also weak for constant currency RASK. Each of the three suffered declines in the range of 4% to 5% in both regions, with the exception of Lufthansa in Asia Pacific, where the drop was limited to 1.5%.

RASK performance in Europe was typically better than in long haul markets. Air France-KLM increased constant currency RASK in Europe by 1.6% (not including Transavia, whose RASK dropped by 0.8%), while IAG and Lufthansa saw this measure fall by 2.8%.

The RASK increase for Air France-KLM in Europe was the best regional RASK performance among the big three in 3Q2015. This was driven by a rise of 8.2% for its medium haul point to point operation (where capacity was down by 12.7%), while its hub operation RASK was flat (+0.1%). 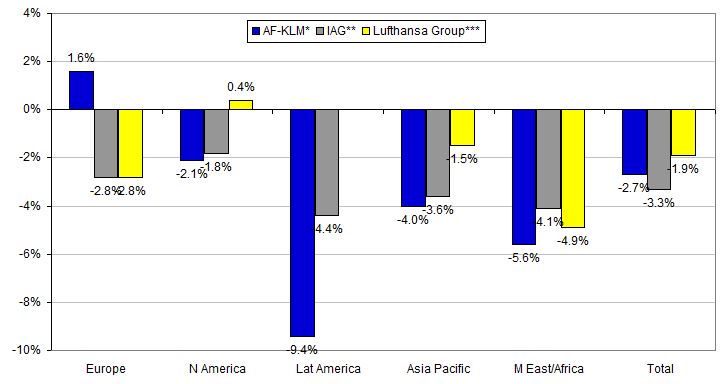 The big three's data for ASK growth and change in constant currency RASK by region in 3Q2015 broadly illustrate the inverse relationship between these two variables. There are many factors influencing unit revenue, but, in general, higher rates of capacity growth have consistently put more downward pressure on RASK, a tough form of market discipline.

The chart below is a scatter plot of constant currency RASK growth (vertical axis) versus ASK growth (horizontal axis) for the big three European legacy airline groups in 3Q2015. The black line on the chart is the trend line through all the data points and its downward slope confirms the inverse relationship noted above. The blue trend line on for Air France-KLM also clearly illustrates this relationship.

The very gentle slope of IAG's grey line provides only weak evidence, but IAG's position on the chart suggests that its RASK is less vulnerable to ASK growth.

The yellow line for Lufthansa actually slopes upwards, suggesting that the group's RASK performance improves as ASK growth increases. The explanation for this is not clear, but it is unlikely that this will be repeated consistently. 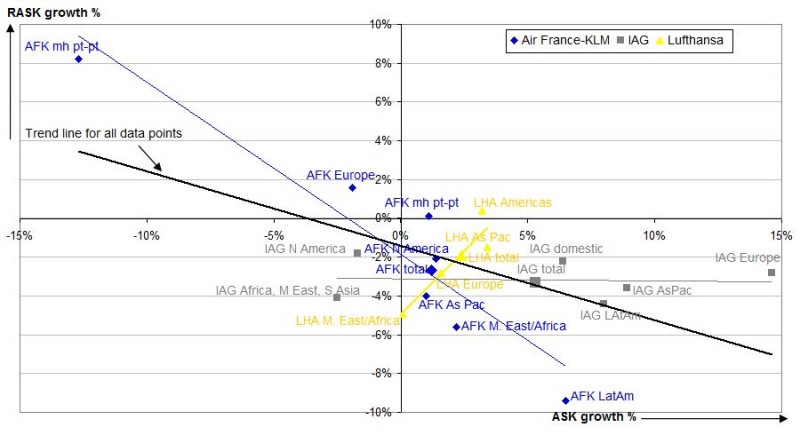 IAG's 3Q results and FY2015 guidance again confirm its position as the most profitable of the big three.

IAG is the smallest of the three by revenue, but it expects the highest operating profit, with a target range of EUR2.25 billion to EUR2.3 billion this year (this excludes Aer Lingus and has been increased from its previous target of EUR2.2 billion).

This compares with Lufthansa's target of EUR1.75 billion to EUR1.95 billion for adjusted EBIT, although this was raised from its previous guidance of more than UR1.5 billion (Lufthansa's target includes results from equity investments, which were EUR121 million in 2014). There is still no profit guidance from Air France-KLM.

Notes: IAG and Lufthansa targets are based on mid-point of company guidance range as of Oct-2015. Lufthansa figures in the chart are based on adjusted EBIT excluding results from equity investments
Source: CAPA - Centre for Aviation, airline company reports