High-speed rail in southern China could challenge Dragonair, but only under combination of factors

With HSR not due to link Hong Kong until 2015, there is time for this scenario to evolve.

Any impact to Dragonair and other carriers would have to occur with an alignment of factors. Currently at least this seems more unlikely than likely: low HSR ticket prices, convenient station locations, maximum train speeds and integrated border control.

There is also the possibility Dragonair and other carriers could swap routes for others as Hong Kong Airport slots become more scarce.

There are two high-speed rail lines of interest to Hong Kong. First is the Hong Kong-Beijing HSR line passing through Shenzhen and Guangzhou around the Pearl River Delta and then through central parts of mainland China (such as Dragonair destinations Changsha and Wuhan) en route to Beijing. Speeds will top at 350km/h although recently have been run to a maximum of 300km/h. The second is a line from Shenzhen to Hangzhou (south of Shanghai) that hugs China's eastern seaboard and will pass through Dragonair destinations Xiamen, Fuzhou, Wenzhou and Ningbo (Dragonair also serves Hangzhou). It will have a maximum speed of 250km/h.

The Xiamen-Shenzhen portion, the final one to be completed, is due to open in late 2013. The Shenzhen-Hong Kong HSR link (which continues to Guangzhou with Beijing as its final destination) will not open until 2015 and will run at only 200km/h, although this is faster than the existing Hong Kong-Guangzhou link, which has a maximum speed of 160km/h (and has a more circuitous path). The Guangzhou-Beijing HSR section opened in late 2012.

The core guiding principle for pitting HSR against air services is that HSR is usually (but not always) competitive against air services on routes under 800km. Routes between 800-1200km can be competitive under certain conditions, namely if HSR is "high speed" (generally considered 250km/h or above). Four Dragonair cities along the HSR path are under or around 800km from Hong Kong: Hong Kong to Guangzhou is 136km while to Xiamen is 497km, and to Fuzhou is 709km and to Changsha is 645km.

Some 8.7% of Dragonair's mainland China network is on routes under 800km. But this includes short routes like Haikou and Sanya that will not have competitive high-speed rail in the medium term at least. An estimate of the percentage of Dragonair's ASKs in 1H2013 that could theoretically come under pressure from HSR in the medium term is 7.1%, but there will need to be significant developments for even that small percentage, or a fraction of it, to come under threat. The 7.1% figure corresponds to 4.6% of all Dragonair ASKs. 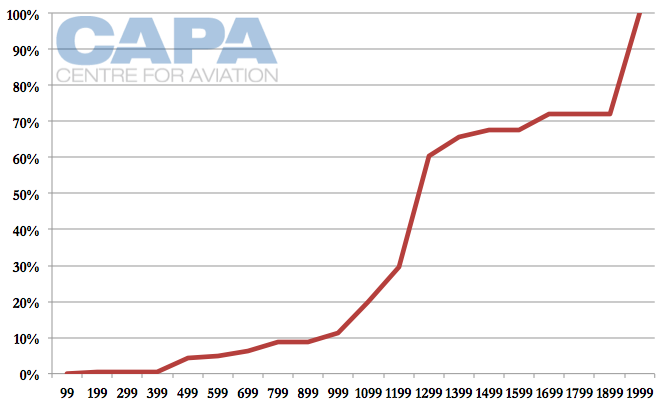 Routes under 1200km, the very, very upper limit of HSR's competitiveness, account for 29.6% of Dragonair's mainland China ASKs. But many of these cities between 800km and 1200km (Hangzhou, Ningbo, Wenzhou) are along the path of HSR that will run at 200-250km/h, all but eliminating their ability to compete with notable portions of the air market. 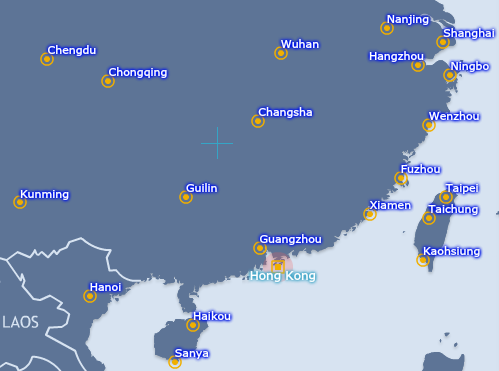 Connecting traffic is high, shifting balance of a route’s economics – O&D not critical

Dragonair has frequent services to these destinations: double daily to Guangzhou, upwards of four daily to Xiamen, double daily to Fuzhou and daily to Changsha. Dragonair is the largest carrier in these markets, which see service from other carriers, including China Southern operating between Guangzhou and Hong Kong (but almost exclusively to feed its Guangzhou-based network) and on the second-shortest route in this examination, Hong Kong-Xiamen, Hong Kong Airlines, Spring Airlines and Xiamen Airlines operate between Xiamen and Hong Kong.

Overall, however, these routes have minor importance to the carriers and to Hong Kong airport. Even if – if – HSR eventuates as direct competition and there are capacity decreases as a result, they will be minor to the larger picture and undoubtedly be offset by growth opportunities to new cities or increase capacity to other markets; such is the benefit of a high-growth market.

But HSR would need to take a large amount of the already limited O&D traffic to substantially change the route economics. Hong Kong-mainland China traffic is heavily connecting; often over 50%, and Dragonair has done well building connecting traffic out of southern China in particular. Losing some O&D traffic could mean targeting more connecting traffic and hoping for higher yields in face of the increasing competition. The routes may also not see much growth as new passenger volumes offset the loss of other passengers.

Only a convergence of factors will challenge flights

While HSR may one day exist from southern China to Hong Kong, it is not a foregone conclusion to assume air services in these markets have numbered days. For HSR to begin to compose a competitive risk, HSR must have exactly the right proposition.

HSR in China initially had a top speed of 350km/h, but this was reduced to a maximum of 300km/h after a Jul-2011 crash in Wenzhou that killed 40. Comments from the Japanese manufacturer of the train indicated that at 350km/h trains were operating above the recommended speed but within the limit; they were eating into their safety margin. Whether 350km/h service is restored is unclear.

Not all services operated at 350km/h to begin with, and the east coast line from Shenzhen to Hangzhou will be at a general maximum of 250km/h, reducing the advantage of HSR over flying.

Fares at present are considered subsidized, and as China seeks to recoup the billions of US dollars it has invested in the HSR network, fares may increase – as has occurred in other markets looking to recoup investment.

The public’s perception of HSR is important too, and elastic. Willingness to take HSR after the Wenzhou crash declined. Although PR campaigns are under way directly and indirectly (positive articles in state-owned media), an aviation incident could just as easily swing the pendulum back in HSR’s favour.

Where new construction opportunities permit, airports are being co-located with HSR stations, as is the case at Shanghai Hongqiao, although the airport station may not be the exclusive HSR station for a city.

While HSR does not have airport-style security, there is light security processing that reduces the convenience of HSR as it is found in Europe, for example.

If factors align, intermodal tickets could be a possibility

Dragonair CEO Patrick Yeung has not ruled out the possibility of selling combination HSR-plane intermodal tickets, but is not actively considering the possibility, which is popular in Germany and France especially and, closer to home, with China Eastern (selling train tickets around the Yangtze River area and soon Taiwan) and Hainan Airlines (selling tickets between Haikou and Sanya, both located in Hainan island).

There is no high-speed train station at or planned to be near Hong Kong Airport, unlike at Shanghai Hongqiao (a hub for China Eastern). So transit matters become problematic, albeit not necessarily insurmountable. But the largest reason against dropping flights in favour of HSR cooperation – as has occurred in Europe but not yet in Asia (except Taiwan) – is that passenger composition on routes that may be affected is already heavily connecting. But if the local point-to-point segment shifts – which seems more unlikely than likely – the economics change and short-haul flights would have to be subsidised by long-haul services, a proposition others have concluded to be unsustainable.

HSR should be impetus to improve infrastructure – ATC notably

The existence of HSR and potential for it to overlap on more routes would ideally spur the aviation industry to make itself more efficient. But in this part of the world the stumbling block is air traffic control in mainland China. The Chinese military controls ATC and only a portion is available to passenger flights, and that portion is often taken away due to frequent military exercises.

Despite China’s Big Three carriers – Air China, China Eastern and China Southern – being state-owned, and Chinese aviation regulator CAAC wanting to improve ATC, their clout is little as the Chinese military is largely an entity unto itself that few in government can control. ATC reform is occurring gradually but not fast enough to adequately support the current environment, let alone future growth.

Where air travel holds an advantage over HSR on paper, this can be quickly erased if frequent delays in Chinese airspace prolong flight journey times.

Chinese carriers reckon they have lost some passengers on the main trunk Shanghai-Beijing route to HSR because the trains offer mobile service and data connectivity, allowing for greater productivity than when flying, even if the journey distance is longer. Chinese carriers are hoping to win passengers back with in-flight connectivity, but offering this product seems to be some time off while government bodies approve it.

Outlook: HSR will grow HK-southern China traffic, but not at the expense of airlines

HSR will grow traffic between Hong Kong and southern China, but it is difficult to see this coming at the expense of airlines. HSR in this region has not yet been shown to have the right combination of factors to make it more attractive. And even if those factors do materialise, connecting traffic is predominantly between Hong Kong and mainland China, softening the volume - but not necessarily yield - impact of HSR.

A greater concern for airlines would be the increasing competition in southern China, from an increasingly network-focused Hong Kong Airlines to an ever-expanding Xiamen Airlines that will in time start long-haul services. This will place more pressure on Dragonair than will the expansion HSR.