North and South American airline stocks declined on Wednesday (16-Jun-2010) after FedEx warned it is expecting higher costs to constrain earnings for FY2011. The Dow was flat as a result, with comments from FedEx outweighing optimism after Apple reported higher-than-expected sales of its new iPhone.

However, Jesup & Lamont equity analyst, Helane Becker, reiterated a "Buy" rating for the carrier during trading, with an USD11 price target.

Hawaiian Airlines stated the day prior that it expects revenue per ASM (RASM) to improve by 6.5% to 8.5% compared with 2Q2009, with the expected range of improvement slightly below previous expectations of 8-11%. Cost per ASM (excluding fuel) is expected to increase by 3.5% to 5.5% for the quarter, which is lower than the carrier's expected 5-8% increase.

FedEx (-6.0%) also slumped after the freight carrier stated it expects growth in earnings in fiscal 2011 to be constrained by significant increases in fixed pension and volume-related aircraft maintenance expenses, along with higher-than-anticipated healthcare costs. In addition, its earnings guidance includes increased costs related to the planned reinstatement of various employee compensation programmes.

Alaska Air (+2.0%) was the day’s biggest gainer. Alaska Airlines and Horizon Air announced plans to charge passengers USD20 for each of their first three checked bags. This represents a USD5 increase for the first checked bag, a USD5 decrease for the second, and a USD30 decrease for the third. In addition, the airlines cut the cost of the fourth through 10th checked bag from USD100 per bag to USD50. 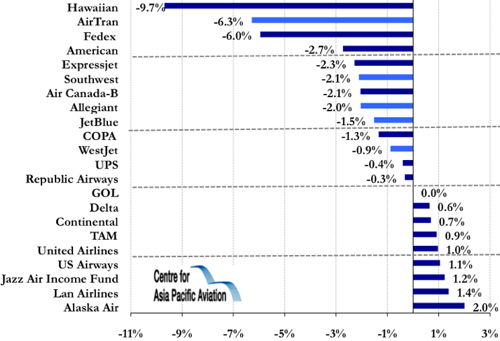