Hawaiian Airlines continued to see improvements in its long-haul network during 3Q2014 as the changes it has made to lift the fortunes on its Asian and Australian routes seem to be bearing fruit.

The airline’s performance in its North American and inter-island markets was more tempered as those regions recorded strong performances in 3Q2013, making the comparisons a bit more difficult. However, capacity in North America is up year-on-year, driven in part by Hawaiian adding service to the US west coast.

Hawaiian started 4Q2014 facing unit cost inflation as one-time investments and other items are pressuring its cost performance. The airline believes that some drivers of its higher costs should be accretive in the long term, and expects some decrease in unit cost growth during 2015.

Hawaiian recorded overall passenger unit revenue growth of 2.2% during 3Q2014 on a 1.3% increase in yields. The airline’s total unit revenue increase was 4.4%, reflecting rapid growth in other revenues driven in part by preferred seat sales, which hit an important USD1 million per month revenue milestone during Mar-2014 and increased to USD2 million in Aug-2014 and Sep-2014. Hawaiian introduced its new Extra Comfort product offering in Aug-2014, so the bump in non-ticket revenue was also driven by the introduction of the extended legroom product.

During 3Q2014, Hawaiian’s long-haul routes to Asia and Australia represented 26% of its top-line revenues, compared with 30% the year prior. The airline has opted to cut under-performing routes to improve the revenue performance of its long-haul entity, and in 1H2014 eliminated flights from Honolulu to Fukuoka in Japan and Taipei in Taiwan.

The airline’s passenger unit revenues on its trans-Pacific international routes increased 11.5% year-on-year, compared with a 17.7% drop in 3Q2013. At the end of 2Q2014, Hawaiian projected positive revenue growth for 2H2014 in its long-haul network. The airline owed its positive performance in 3Q2014 to recording a full quarter of its route cuts and the maturing markets it has added since 2010 including Tokyo, Seoul, Osaka, Brisbane, Auckland, Sendai, Sapporo and Beijing.

Presently, Hawaiian has no plans to change its favourable outlook for its long-haul network for 2H2014 even as the USD is elevated against the JPY and AUD. The airline does have hedging in place for currency fluctuations in 4Q2014, but it does face some risk as it has larger point of sales at its Asian and Australian destinations for travel to Hawaii.

Some of the capacity cut from Hawaiian’s long-haul markets was redeployed back to North American routes. It launched seasonal service from Lihue and Kona to Los Angeles and Oakland, transitioned Maui-Los Angeles flights to year-round and re-launched service from Honolulu to San Jose. In Nov-2014 Hawaiian is launching service from Maul to San Francisco, breaking United’s monopoly status on the pairing.

Some of the slide in passenger unit revenues – 0.5ppt –  was attributable to effects from hurricanes Iselle and Julio that struck Hawaii during 3Q2014, said COO Peter Ingram. He also stated the results reflect “capacity increases on our part with a combination of more peak season flying and some year round schedule additions in Los Angeles and the [San Francisco] Bay area following network adjustments announced in the first half of the year”.

Mr Ingram assured that demand to North America remains strong as the capacity Hawaiian has shifted was profitably absorbed. He estimated that industry capacity would rise 11% year-on-year during 4Q2014.

When Hawaiian opted to shift some capacity stripped from long-haul markets back into North America, the move raised questions about potential overcapacity in North American markets. During 2013 both Hawaiian and Alaska adjusted their capacity from Hawaii to the US mainland to restore supply-demand equilibrium. Alaska plans to launch new service from San Diego to Kona in Mar-2015, so there could be some risk that overcapacity could return in the Hawaii-US mainland market.

The two hurricanes that struck Hawaii during 3Q2014 resulted in the cancellation of 30 inter-island flights, which dragged down Hawaiian’s passenger unit revenues in those markets by 1.9%. Its inter-island load factor fell 3.7ppt year-on-year during 3Q2014.

Hawaiian’s overall outlook for its inter-island markets remains favourable. But in early 4Q2014 the airline also experienced some challenges from Hurricane Ana, which could create some revenue headwinds in the final quarter of 2014. 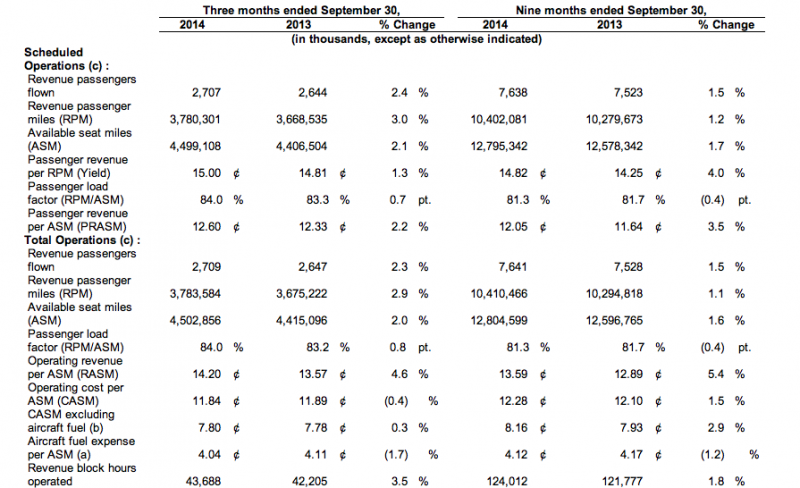 Roughly 2.5ppt of the anticipated cost rise is as a result of changes in Hawaiian’s operating cost structure, said Mr Topping. Those elements include increases in incentive compensation and profit sharing, operating costs from Hawaiian’s new inter-island airline Ohana and salary expense related to hiring pilots to comply with new rest and duty time regulations. Hawaiian also remarked that changes to its Japanese commission structure could affect it unit costs, but some of the increase will be offset from revenue increases stemming from the changes.

Hawaiian refrained from offering specific guidance about its cost performance for 2015, but Mr Topping stated “we might say low single digits”. However, he stressed that he reserved the right to issue an update on guidance at Hawaiian’s investor day in Dec-2014.

Fallout from the storms affecting some of Hawaiian’s operations resulted in the airline’s 3Q2014 net income falling from USD41 million to USD35.5 million year-on-year. Its top-line revenues increased 6.7% and expenses grew just 1.6%, which resulted in a 43% rise in operating income to USD106 million. 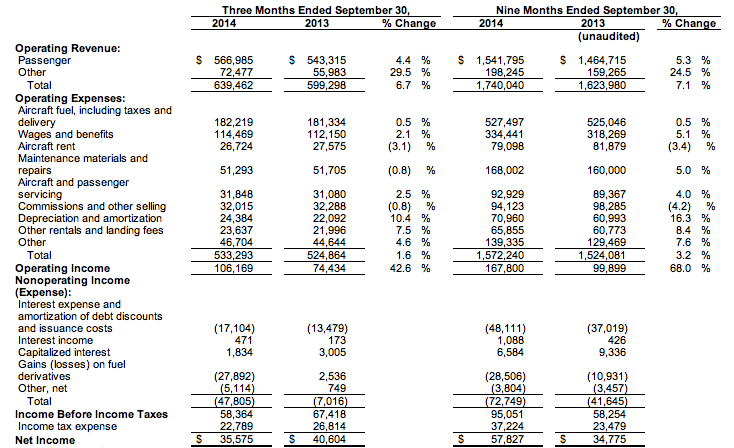 Hawaiian Airlines has made some necessary moves in order to reverse its negative performance in long-haul markets. Even as the threat of overcapacity hangs over the Hawaii-US mainland market, for the moment the airline’s redeployment of long-haul supply back to the mainland does not appear to be creating a huge drag on its performance in the region.

But at some point in 2015 Hawaiian may need to re-examine its supply deployment to the US mainland.

Although Hawaiian faces some cost headwinds in late 2014, the investments it is making and the network changes it has undertaken should position the airline to deliver continued solid financial results in 2015 as the airline’s shareholder eagerly wait for Hawaiian to crystallise its plans for investor returns.