Chinanews.com.cn on Sunday quoted Hainan provincial government officials noting there is a bubble emerging in asset prices in the local economy, but ruled out the possibility of repeat of the 1992 property crash.

The island's GDP expanded by 25% in 1Q2010 (the fastest pace across the country) as investors poured into the property market following a Dec-2009 announcement by Beijing to transform the island into an international tourism destination.

Virgin Blue reversed recent share falls with a solid 5.1% gain yesterday as markets recovered from the European sovereign debt hangover and RBS Equities maintained its ‘buy’ rating on the stock.

The Virgin Blue group has been appointed, along with 14 other airlines, to supply international air transport services to the Federal Government. RBS noted, “with any benefit from the successful tender likely to be gradual, and a strong recovery in earnings already expected in FY2011, we leave our FY2011 forecasts unchanged and maintain [the] ‘Buy’ [rating]”.

RBS added, “we believe that VBA's appointment could see its share of Government travel increase over time to reflect its general market share (about 33% of Domestic market share). However, [it is] yet to be seen just how judiciously the "Lowest Practical Fare" policy is applied”.

Singapore/Australian LCC, Tiger Airways reports passenger numbers surged 45% in Apr-2010 to just over half a million, while average load factor gained 3 ppts to 84%.

Tiger stated, “following the record passenger numbers in our last fiscal year, we are pleased to start the new fiscal year with continued high growth rates”. The airline continued, “by adding another seven aircraft to our fleet during this fiscal year, we will be able to serve more passengers on routes that we identify as the most profitable”. 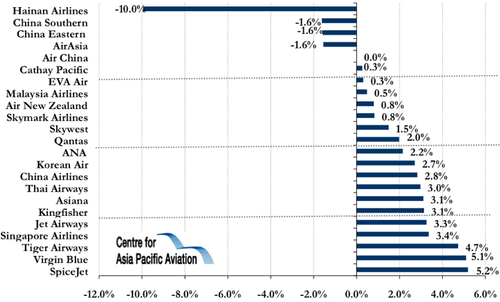