Hainan Airlines, China’s largest private carrier, is planning to launch three new airlines in the domestic Chinese market, continuing its portfolio strategy. While China’s other big carriers have their own partially or wholly-owned subsidiaries as well, only Air China has shown recent interest in high growth through this approach.

While different brands and management teams mean synergies are diluted, many of these carriers receive equity from their hub’s regional government, which want a local airline of their own.

Hainan differs from competitors in also having an international subsidiary strategy, although this approach is still only vaguely defined. No specific growth is planned for the future, and Hainan’s proposals to launch a domestic carrier in Saudi Arabia and to acquire the Philippines’ Zest Airways have fallen through.

This report reviews the establishment of Urumqi Airlines, Heilongjiang Airlines and Fuzhou Airlines - each working towards a hub strategy.

Urumqi Airlines to cater to traffic in China's far west

Urumqi Airlines will be based in its namesake city of Urumqi in Xinjiang administration region in the far western corner of China. Xinjiang is on the border with West Asia and China Southern is using Urumqi’s geography to establish a base in the city for traffic to West Asia, Russia and the CIS. China Southern serves all the CIS nations from Urumqi, although many see less than daily service. In the long-term, Urumqi could develop into a hub for European traffic, with Urumqi acting as a convenient transit point that avoids the circuitry of connecting via Beijing and Shanghai as China’s growth continues to occur more inland and in the west rather than the east coast.

Urumqi Airlines will be established on the foundation of Hainan’s Xinjiang branch company, which is the second largest carrier in Urumqi. While exact ownership of the new carrier has not been decided, Hainan says it expects to have a majority ownership, with other partners, including the Urumqi Municipal Government, taking a minority stake. Hainan plans to list the carrier in due course. The investment also covers areas including finance and logistics, similar to some of Hainan’s other ventures.

Urumqi Airlines will initially operate on regional and intra-Xinjiang services in the far west – which are few and with high yields – tourist flights and business aviation. China’s far west has not seen large development yet, and certainly not to the level seen in Chengdu and Chongqing, considered to be in China’s “west” although they are really in the middle of the country, geographically speaking.

Urumqi Airlines will take on China Southern, the largest operator in Urumqi. 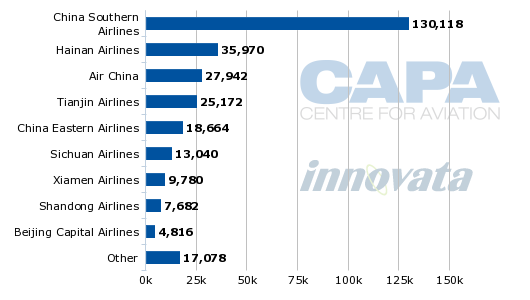 China Southern is the only Chinese carrier to have notable international capacity from Urumqi. 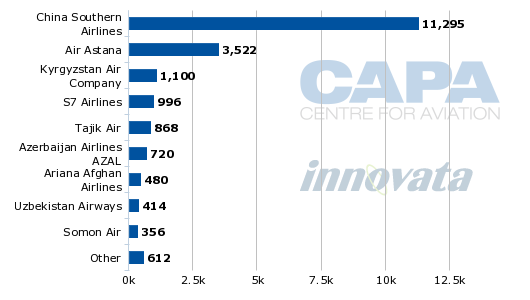 The largest routes from Urumqi based on available seat capacity are to various regions of the country. Some 94% of all seat capacity is in the domestic market. 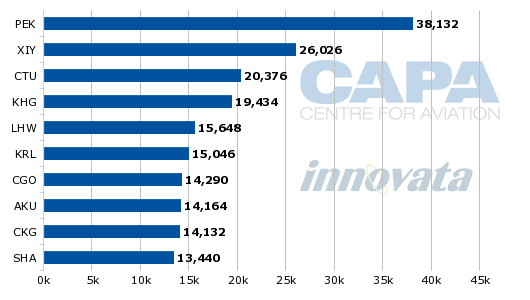 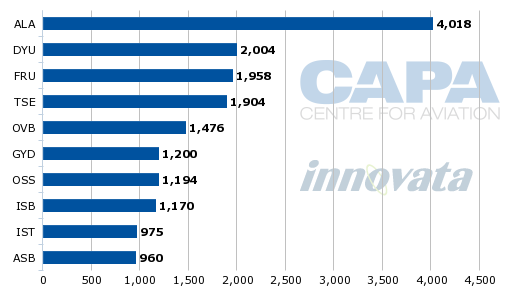 While the east coast of China is experiencing slowing growth, the northeast is undergoing a revival and growth is high. As CAPA previously wrote:

A decade ago as the boom was well underway in Beijing, Guangzhou, Shanghai and Shenzhen, China's northeast was a sore point. Once the epicentre of state-owned enterprises, the northeast had become a rustbelt. Figures on state-owned companies vary; some say they were responsible for two-thirds of the region's GDP (despite being unprofitable) while the oil industry alone was responsible for 80% of profits. As the need for efficiency caught up to the region, state-owned enterprises dismissed workers, leading to significant social unrest.

Shortly after China, with all its central planning might, launched a "Develop the West" campaign, it started a "Revitalise the Northeast" campaign. Whereas the northeast had been centred on oil as well as steel and coal, diversification was the objective. Some reports speak of four key pillars – petrochemicals, metallurgy, machinery and electronics – for the region while others also include automobiles, professional services and power generation.

There is still a bent towards state-owned companies: Liaoning is home to 37 Fortune 500 companies while in the west, the city of Chengdu alone boasts links to half of them. There are a myriad of R&D centres and high-tech zones, which could bode well for carriers: Cathay Pacific reports the IT industry in China accounts for a greater share of premium travel than the industry in other markets.

The Economist reported that from 2006 to 2009 the northeast's GDP "grew faster than that of the country's other three main economic regions, in the east, centre and west. It has outpaced national GDP growth every year since the late 1990s, with a markedly wider lead since 2008." Its sister publication The Economist Intelligence Unit forecasts that Liaoning alone by 2014 will be the largest recipient in China of FDI.

Japan and Korea are the leading the way, but US electronic firm Intel opened in 2010 a USD2.5 billion chip factory in Dalian, in southern Liaoning. Economic growth has not come with the wide social disparity as found in other regions: to quell early discontent and protests, Liaoning was the home of what is generally regarded as China's first experiment with (effective) social welfare.

Air China has focused on this growth area, launching Dalian Airlines (based in Heilongjiang's neighbouring province of Liaoning) and proposing a carrier in Inner Mongolia, also neighbouring Heilongjiang province. Dalian is 835km away from Harbin.

At Harbin the larger carrier in Mar-2013 is China Southern for domestic and international services. Domestic seats account for 95% of available capacity at Harbin. 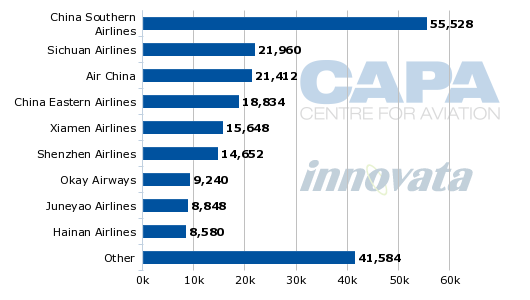 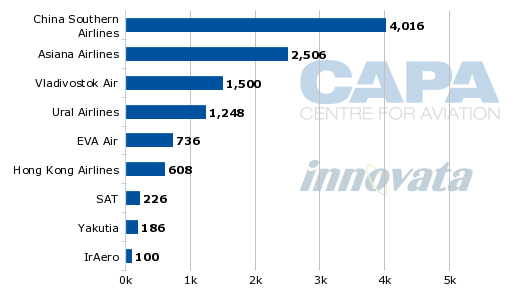 The largest domestic routes are primarily around the east coast while international routes are to Northeast Asia and Russia. 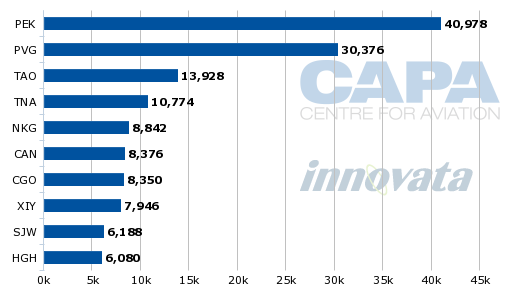 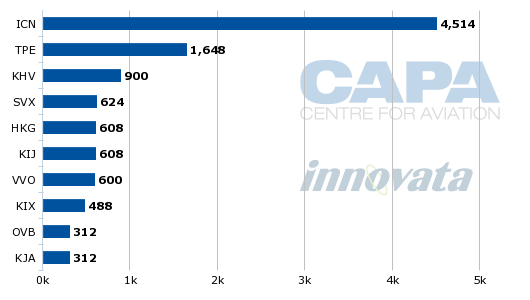 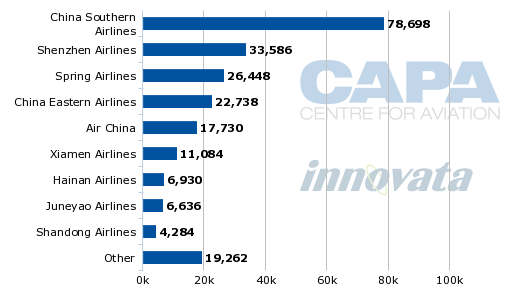 Peers Air China, China Eastern and China Southern have developed a multi-hub strategy that sees them expanding a presence in various corners of China, which is also notable for the carrier’s ability to build the growing amounts of transfer traffic.

Hainan has previously lacked such a clear hub strategy, growing where it can. Despite being from namesake Hainan province, its largest hub is at Beijing and elsewhere has not amassed a scale the way peers have to develop their hub presence.

While the three proposed carriers will increase Hainan’s footprint across China, it is not clear yet how or if their home bases will develop into significant hubs, although Hainan’s indications for potential out of Urumqi are strong, and both Urumqi and Harbin offer geographical advantages should they be turned into international hubs. This will be a long-term development.

Hainan/HNA is expanding fast, with a mixed fleet across its numerous subsidiaries 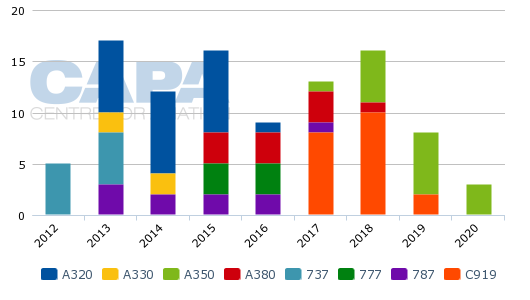 No new HNA airlines in international market, but already in Ghana and France

Hainan Airlines had submitted an application to launch a domestic carrier in Saudi Arabia as part of that nation’s liberalisation of its domestic market. But in Dec-2012 the Saudi authorities announced Gulf Air and Qatar Airways as the successful applicants; Hainan was not. Hainan had also mooted the possibility of bidding for the Philippines’ Zest Airways, but this will very likely not eventuate following the 11-Mar-2013 announcement that AirAsia would invest 49% in Zest, the maximum foreign ownership allowed. AirAsia has a Philippines operation, AirAsia Philippines, as part of its pan-Asian strategy.

These are not necessarily setbacks, as the synergies from these proposed operations were not immediately clear, especially with Zest where the Philippine market suffers from over-capacity and in general is low-yielding.

Mainland LCC Spring Airlines is preparing to launch a Japanese subsidiary, but there yields are higher and Spring on its Chinese AOC is restricted with the China-Japan routes it can serve. On a Japanese AOC Spring would not face those restrictions, mainly implemented to protect China’s state-owned carriers. The China-Philippines market sees less protectionism from the Chinese side.

In Saudi Arabia, Hainan could have operated profitably, but with few obvious synergies for its key mainland domestic operation. China-Saudi Arabia links are few, at least for the time being.

Larger links exist between China and the African continent, and in Ghana Hainan invested in regional carrier Africa World Airlines. Here again the immediate synergies are not large. Hainan’s overseas ventures are partly the result of the carrier facing growth limitations at home (because it is privately owned and also because Beijing controls aircraft imports to ensure steady and not over-rapid growth) and a large cash pile conducive to investments that are relatively small comparable to the size of Hainan.

The clearest-cut foreign venture for Hainan is its stake in France’s Aigle Azur. China typically limits one domestic carrier to serve international routes, with an exception made for Air China, the country’s flagship and government-preferred carrier, which is able to serve routes even if other carriers already operate them.

Paris is served from Beijing (Air China), Guangzhou (China Southern), Shanghai (Air China and China Eastern), effectively limiting Hainan to serving Paris from a less viable mainland Chinese city or linking a main Chinese city to a less viable French city. With Hainan’s investment, Aigle Azur will receive A330s from Hainan – representing Aigle’s first widebody aircraft – and be able to use them to open a Paris-Beijing service, circumventing the restrictions it would have faced on its Chinese AOC.

The lack of publicly disclosed new international ventures will hopefully mean Hainan uses its time and resources to boosting the performance of its existing ventures. In particular, Hong Kong Airlines and sister carrier Hong Kong Express have potentially expansive upside – but they require substantial support in time and resources from Hainan.

Hainan is an interesting group, experimenting towards a comprehensive strategy

Hainan is well respected internationally, seen as a more efficient full-service Chinese carrier and more internationally-minded than its peers. But its foreign ventures, especially Hong Kong Airlines, have not generated similar confidence in the industry yet. Hong Kong Airlines' ill-fated all-premium operation to London has resulted in Hainan taking the three dedicated A330 aircraft and deploying them in the domestic market in the same all-premium configuration. This may require a re-think too.