Now with the most recent US route launches behind them, the next moves by the Gulf carriers into the market are being watched closely as the stature of those three carriers continues to rise on a global scale.

All three carriers have previously stated their desire to further enhance their service footprint in the US. But for the moment no new direct services have been announced by those airlines; however there is some subtle movement as Qatar and American Airlines have introduced a codeshare ahead of Qatar’s ascension into oneworld later in 2013. Emirates and Etihad are making capacity adjustments in some existing US markets while Emirates is making an interesting move by introducing new service between Milan and New York as part of a one-stop route from Dubai.

The launch of service by Emirates from Dubai to Dallas, Seattle and Washington Dulles during 2012 helped to solidify its status as the leading carrier between the Middle East and the US. With the addition of those three destinations Emirates now operates direct flights from Dubai to seven US markets. Emirates also serves Houston Intercontinental, Los Angeles, New York JFK and San Francisco. 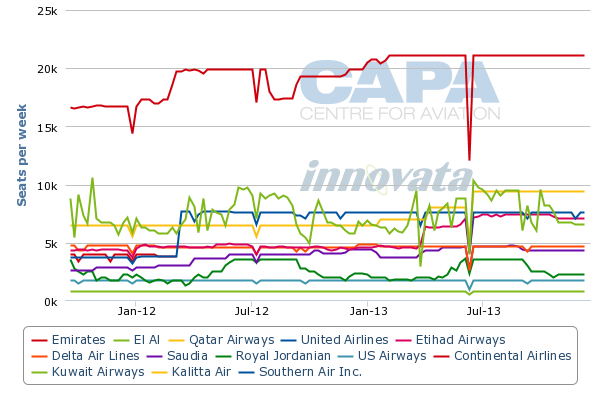 Emirates enjoyed healthy load factors in its US markets during 2012, based on data from the US Department of Transportation. An examination of loads by categorising Emirates’ US markets as destination airports showed its flights to Dallas/Forth Worth (which began during 1Q2012) and San Francisco performed the best, with 91% and 92% average load factors respectively. A load factor of about 85% was achieved to Los Angeles, 82% to Houston, 79% to Seattle (which was also launched during 1Q2012) and 71% to Washington, Dulles (which launched in Sep-2012).

With the exception of New York JFK, Emirates operates Boeing 777-300ERs/200LRs on its US flights. But beginning in Dec-2013 the carrier plans to begin operating its 489-seat jumbo Airbus A380 on service to Los Angeles, which will be Emirates’ second A380 market after JFK.

The carrier has two different configurations on its 777-300ERs, 364 in a three-class layout and 427 seats in a two-class configuration. Depending on the aircraft operated, Emirates will be introducing either 125 or 62 additional seats in the Dubai-Los Angeles market once the A380 is placed on the route.

With 58 A380s on order, Emirates arguably has to deploy the aircraft somewhere. But the airline has served Dubai-Los Angeles since 2008, and with 85% loads it may not be difficult to fill the extra capacity created on the pairing. Los Angeles is one of the busiest markets in the US, so demand should surface in due time to make the A380 viable on the pairing.

Emirates’ service to the US continues to show financial traction as the carrier estimated its Americas' revenues grew nearly 24% from FY2011-12 to FY2012-13. During the fiscal year ending 31-Mar-2013, the Americas (Emirates also serves Toronto in Canada and Buenos Aires, Sao Paulo and Rio de Janeiro in South America) represented 12% of the carrier’s revenues on a geographical basis. 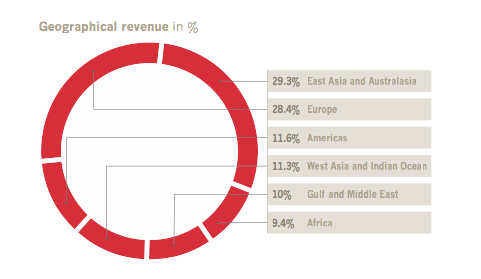 Emirates also made another interesting move into the US market in Apr-2013 when it announced the launch of service from Milan to JFK as part of one-stop service from Dubai to JFK in 4Q2013. Emirates hasn’t used fifth freedom rights strategically in the US since abandoning its Dubai-Hamburg-JFK routing in 2008. Between 2008 and 2012 Emirates made a push into the US through direct service, so the trans-Atlantic routing seems to add another layer onto its strategy of serving the North American market.

Once Emirates introduces the flights, it will hold a commanding 30% share of the one-way seats on offer from Milan to New York (including New York Newark, which is served by United). It is a bold move to add that much capacity into a new market, but previously Emirates president Tim Clark has remarked that the carrier has carefully monitored traffic flows and determined the Milan-New York market was underserved, particularly in the premium business market. Emirates will also be the only carrier offering a first-class product on the pairing. 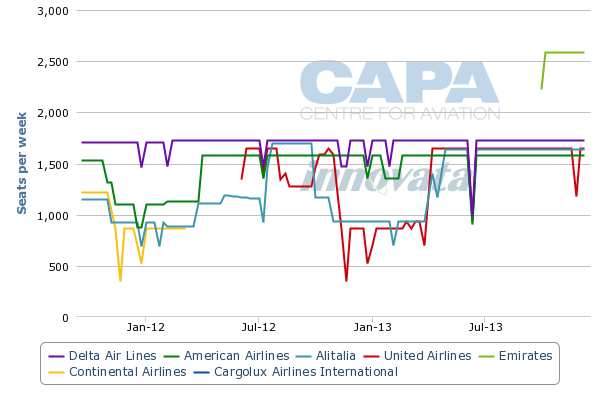 Emirates has thrown down a gauntlet to SkyTeam partners Delta and Alitalia, who together will hold a 37% seat share between Milan and New York when Emirates launches service. Given Alitalia’s fragile financial state, Delta will likely take the lead in a competitive response, which could entail deep discounts on its premium offering in order to keep its corporate customers in the New York market satisfied.

Reports have also surfaced that Emirates may be considering Copenhagen-Seattle pairing, which could indicate the carrier may be pursuing a two-prong strategy in the US through direct flights and one-stop service through Europe. That scenario could create a new competitive dynamic for US carriers serving the trans-Atlantic – additional capacity on some of their more traditional markets by a carrier that is also renown for its premium service.

Qatar’s new service from Doha to Chicago O’Hare introduced in Apr-2013 joined its existing service to Houston Intercontinental, Washington Dulles and New York JFK. Similar to Emirates, US DoT data show that Qatar posted decent load factors on its service to the US during 2012. Using Houston, Dulles and JFK as destination airports, Qatar’s loads on those routes were 87%, 83% and 87%, respectively.

Qatar has previously mentioned Atlanta, Boston and Detroit as potential candidates for US service, but it is not clear how its pending membership into the oneworld alliance and its new codeshare with American Airlines will change its view of US expansion.

Atlanta and Detroit are hubs for Delta, so it doesn’t seem logical for Qatar to flow passengers over those markets. Dallas seems like a more likely choice for Qatar given its new relationship with American and the fact that it was one of Emirates’ strongest markets in 2012 in terms of load factor (some of the high loads were no doubt driven by promotional fares since Emirates only launched Dallas in 1Q2012). It seems like focussing on American’s positions of strength in the US would maximise Qatar’s traffic flows as it expands into the country.

While O&D demand is likely strong from Doha to JFK, Dulles, Houston and Chicago, bolstering connecting traffic may be a priority for Qatar. More importantly, the ties being forged between Qatar and American add some breadth to American’s network, as consolidation in the US will make network connectivity a significant competitive lever as the big three – American, Delta and United – emerge as the major full service network carriers.

American already has ties to Gulf carrier Etihad, and now that Qatar is joining oneworld it is not clear if that relationship will remain intact. Previously, it would be a given that American would end its tie-up with Etihad as Qatar joins oneworld and expands its US presence. But oneworld is one of the more lenient alliances, and the tie-up between Qatar and American does not automatically mean that American will abandon Etihad. The continued cooperation will hinge more on existing and potential partnerships maximising and optimising revenues and connectivity through broadened networks.

It is not clear if American will need to partner with all three large Gulf carriers, so Emirates’ hope of a tie-up might dim as the majority of American’s attention is now turned inward to the complex merger integration it will soon be undertaking with US Airways. If the partnership does not come to fruition, Emirates’ latest moves show that it will continue to chart its own course in expanding into the US and the Americas.

Etihad has the smallest footprint among the Gulf carriers which is not surprising given its status as the youngest of the three airlines. It joined Emirates and Qatar in serving Washington Dulles when it debuted flights from Abu Dhabi in 1Q2013.

Etihad is planning to launch service to a fourth not yet named US destination in 2014. Capacity in the Abu Dhabi to Chicago and New York markets is also set to increase as Jet Airways moves the stopover of its India-US flights from Brussels to Abu Dhabi. In Apr-2013 Etihad signed a landmark deal with Jet which included Etihad acquiring a 24% stake in Jet and the two carriers implementing a comprehensive codeshare partnership which will cover, among many other things, service from the US to over 20 points in India via Abu Dhabi.

A new US customs pre-clearance facility at Abu Dhabi will make the joint Etihad-Jet US-India product even more appealing. The facility will also give Etihad an edge over its Gulf competitors and other carriers in the fast-growing US-Middle East market. As CAPA reported on 26-Jun-2013:

Pre-clearance, which enables flights from Abu Dhabi to land in the US as a domestic flight, will give Etihad a competitive advantage as it will be the only such facility in the Middle East or Asia. It is such a big advantage that competitors have been lobbying against the facility opening, claiming it creates an uneven playing field. But [Etihad CEO James] Hogan is confident the facility will open in Dec-2013 or Jan-2014. “It makes the hub even more attractive,” he says.

Mr Hogan says Etihad also plans to launch a fourth US destination in 2014. Etihad currently has a smaller network in the US than rivals Emirates, Qatar and Turkish Airlines. But the new pre-clearance facility and its new partnership with Jet gives Etihad two reasons to focus more on US expansion as it more than doubles its fleet over the next seven years.

Etihad is expected to reveal its fourth US destination within the next couple of months. With service to Dulles Etihad now has a solid presence on the US east coast and representation in middle America at Chicago. Given the energy industry ties between Texas and the Middle East, Houston or Dallas might be a possibility. But Etihad might also look at another larger metropolitan area in order to avoid increasing competition with its Gulf peers.

American would also see a benefit from the potential pre-clearance in Abu Dhabi as it offers Etihad passengers domestic connections at JFK and Chicago O’Hare. Passengers heading between the UAE and any of the over 50 destinations covered by the American-Etihad codeshare could flock to Etihad’s service to avoid annoying customs clearance at JFK and O'Hare. This could make a tie-up with Emirates less attractive for American, given the 123km distance between Abu Dhabi and Dubai.

The US market holds huge potential for the three Gulf carriers, who each seem to be approaching the region with a different strategy – much like their network expansion into Africa, Asia and Europe during the last couple of decades.

With an ardent focus on premium products and attractive connecting points onwards to Asia and Africa, Emirates, Etihad and Qatar are poised to shake up US and Latin America much as they’ve disrupted Europe during the last few years. The US major carriers need to be on their guard, and need to recognise the Gulf airlines’ increasing influence on global aviation and realise that forging partnerships with those carriers is more beneficial than wasting resources on fighting their expansion.