The Middle East's three big network airlines – Emirates, Etihad and Qatar Airways – are following different growth paths in 2016. Emirates is largely holding course, continuing recent 10% p/a ASK growth. Qatar Airways is accelerating growth and so far for 2016 will add as many ASKs as Emirates will – the first year it will do so.

After growing around 20% p/a for most of its short history, Etihad is decelerating with 10% growth although its net ASK additions will be similar to levels in 2012 and 2013. Etihad wants to bed down growth, replace partner aircraft it has been using, and improve equity partner financials amidst the Abu Dhabi government reducing spending, as observed elsewhere in the Middle East following the sharp decrease in oil price. Etihad's size in 2016 is about where Emirates was in mid-2007 while Qatar in 2016 is about the size Emirates was in 2010. Emirates has doubled in size between 2010 and 2016. Etihad has pursued partner growth. There are signs of pressure: ASK growth has outpaced RPK growth in 15 of the 17 months since Oct-2014, and load factors are falling to lows not seen in recent years.

Qatar Airways is the size Emirates was in 2010. Emirates has doubled in six years

In 2010, rhetoric against the big three Gulf airlines – Emirates, Etihad and Qatar – was mounting publicly in Europe in Australia, and beginning to see some US airlines investigate their Gulf counterparts. By the end of 2016, Emirates is expected to have doubled in size (ASKs) compared to 2010, based on schedules filed so far with OAG. 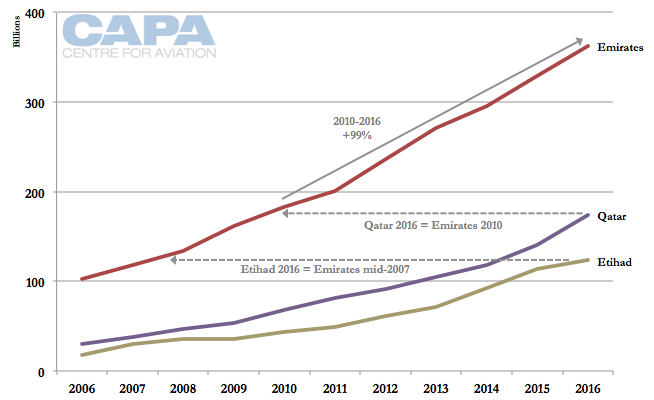 Etihad is slowing growth while Qatar Airways is accelerating

The growth of the three Gulf airlines over the last decade may be confronting in chart form (below). In summary, Emirates has been descending from 20% p/a growth to around 10% for 2014-2016. Etihad, generally around 20%, is quickly slowing in 2016 amidst pressure to bed down its operation. So far Etihad is expected to grow about 9% in 2016, the second-slowest growth rate in its approximately decade-long history; in 2009 it was flat year-on-year. Etihad's next "slowest" year of growth was 2011's 15% expansion.

Qatar Airways reduced its growth rate around the turn of the decade (approximately 13% 2012-2014) but has accelerated since 2015, returning to pre-2011 growth levels despite now expanding from a significantly larger base. 2015 saw 19% growth and 2016 is projected to so far see 23% growth. This could tick upwards more as Qatar has announced new services but not yet filed schedules. 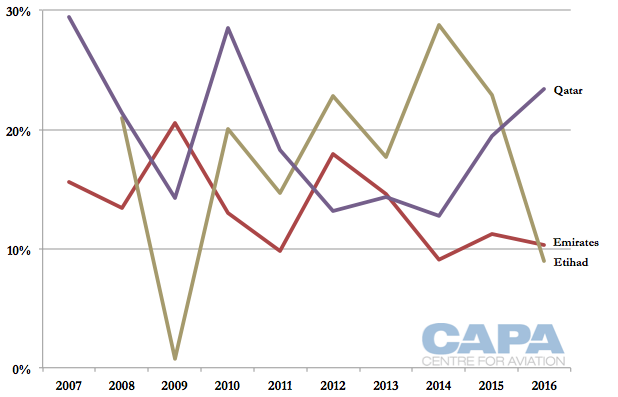 Qatar Airways in 2016 will add as many ASKs as Emirates

2016 is the first year Qatar has come close to growing as much as Emirates – a result of Qatar accelerating growth while Emirates, even if it wanted to grow more, is constrained by capacity at its hub of Dubai International. Emirates' 2016 ASK production increase is similar to levels seen in 2013 and 2015, but down from a peak in 2012. The strong growth of Qatar alone compares to 2015 airport traffic in which Abu Dhabi and Doha collectively added as many passengers as Dubai International. 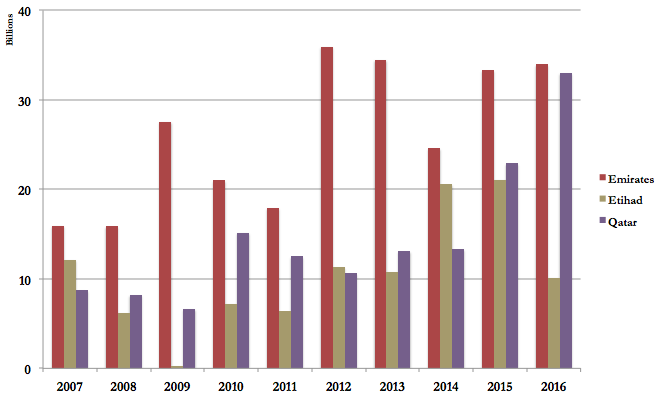 Qatar Airways serves more destinations than Emirates. Etihad adding only one city in 2016

Qatar's growth is occurring through route thickening but also the launch of new destinations. In 2011 Qatar overtook Emirates for number of destinations served. The two dovetailed until 2015 when Qatar began an upwards trajectory faster than Emirates. The gap has widened in 2016 with Qatar serving over a dozen destinations more than Emirates.

This count excludes four destinations Qatar has announced it intends to serve in 2016 but has not filed in OAG. Qatar plans a further four new destinations for launch in 2017, mostly in Jan-2017 but also mid-2017. 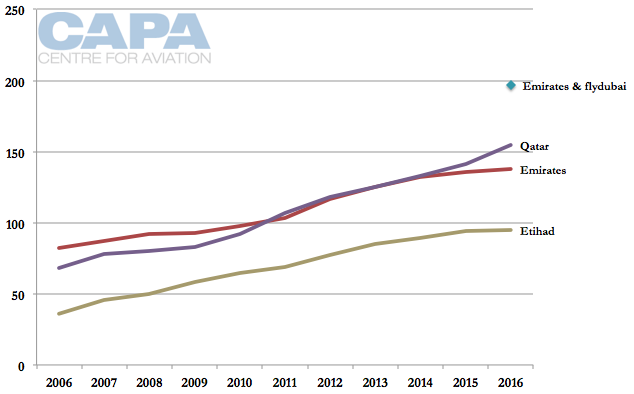 Some of Qatar's destinations are served with narrowbody aircraft, as tags, or with less than daily frequency. In contrast, Emirates generally eschews tags but is making some notable exceptions in 2016 such as with Zhengzhou and Yinchuan, as well as Clark and Cebu. Emirates also generally prefers a daily service. Unlike Qatar, Emirates does not operate narrowbody aircraft, restricting ability to expand into smaller points. In fact, the 777-300ER is effectively Emirates' smallest aircraft (it has a handful of 777-200LRs and A330s/A340s, the latter being phased out). Qatar operates smaller A330s and 787-8s.

Emirates' lack of a smaller workhorse is a matter it intends to address in 2016 with an order for the A350 or 787. If including flydubai – which has the same shareholding of Emirates but the two are independent entities – the combined Emirates-flydubai serves more destinations (197) than Qatar (155). (Turkish serves even more.)

Qatar's surpassing of Emirates in terms of destinations is evident from the below graph of net additional destinations served by each airline – Qatar was adding more points than Emirates and continues to. Also notable is Etihad's slowing of growth. After adding a net of seven destinations a year from 2009 through 2013, Etihad hovered around five in 2014 and 2015. For 2016, net growth will as of Apr-2016 be just one destination according to OAG data (Etihad is opening Istanbul Sabiha Gokcen and Morocco's Rabat, but no longer serving Armenia's Yerevan).

Opening new stations is costly in its own right and generally means a route will be unprofitable for a few years. By focusing on existing destinations and not opening new ones, Etihad can improve its financials. 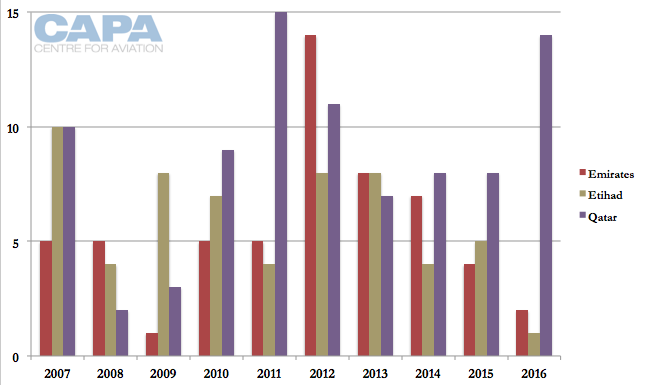 Etihad looks to re-fleet and bed down its investment strategy. Not the time to takeover Virgin Australia

Etihad in 2016 has a remaining three A380s and five 787-9s to take delivery of plus one A330 freighter, according to projections from CAPA's fleet database. The eight passenger widebodies represent an approximately 11% increase over Etihad's existing passenger widebody fleet in terms of aircraft. Seat capacity increases are higher due to the large capacity of the A380.

Much of Etihad's growth in 2016 is actually the result of capacity put in during 2015 but has not yet seen a full-year realisation. 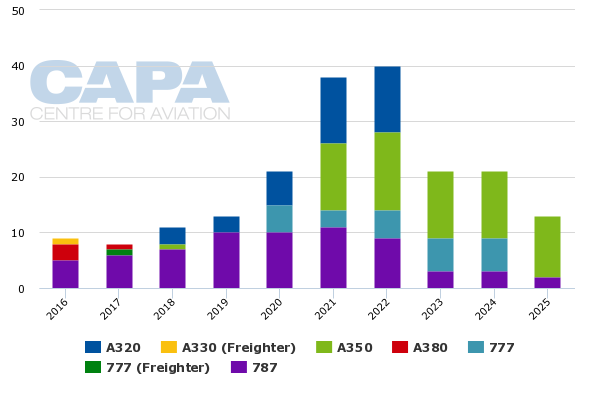 It may seem Etihad will take delivery of more aircraft than it plans to grow with. One objective for 2016 is for Etihad to deploy more of its own branded aircraft. Etihad has been using aircraft from Air Seychelles (A330) and Jet Airways (A330, 777), and this has led to some experience mis-match Etihad is eager to amend. New aircraft deliveries will free up existing aircraft and allow for equipment changes.

Etihad's use of aircraft from its equity partners network is the result of Etihad needing capacity and its partners having a surplus of capacity. Jet Airways in particular did not have a clear long haul strategy, leaving its aircraft idle. Etihad is now in a position to replace Jet aircraft with its own. Jet's use for widebody aircraft that will be handed back to it has a mixed outlook.

For A330s, strong performance of the Indian market could see Jet up-gauge regional international flights (Dubai and Singapore) from 737 to A330. Because of constraints at Mumbai, Jet has started to operate A330s domestically. The six 777s to be returned starting from mid-2016 could cause deployment challenges for Jet as it is still short of a clear strategy for them. The aircraft could be sub-leased again, but if this does not happen Jet may struggle to find a viable role for this equipment, even at the current low fuel prices.

Cooling organic growth allows more management bandwidth to be spent on equity partners that have generally been under-performing financially, airberlin especially. Having gone on a long organic growth expansion and buying additional airlines, now is the time to bed down the strategy. Etihad's shareholder, the Abu Dhabi government, would be particularly eager to see improvements at Etihad at a time the government is under pressure from the fall in fuel prices, its staple source of revenue.

Dubai (hardly dependent on oil revenue) has resorted to increased air departure taxes. Etihad's EBIT margin for the Etihad-branded operation has been under 4% between 2012 and 2014, for when figures are available. Net margin has been 1%, but this all excludes the gains/losses from airlines Etihad invests in. 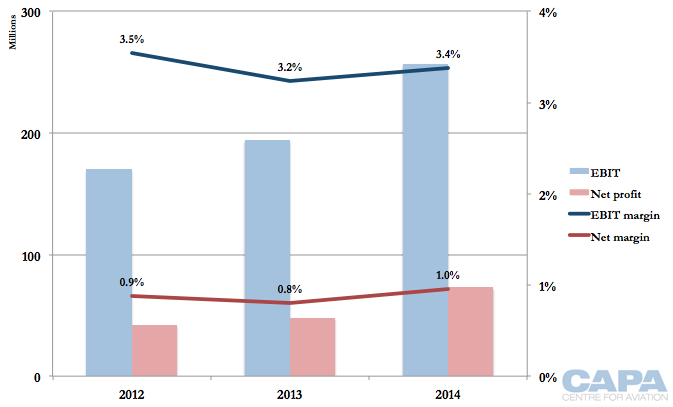 Australia is a larger market for Singapore Airlines than Etihad, and SIA has ample cash reserves. As seen with SIA's purchase of Tigerair well above its market value, the group is not opposed to paying a premium to secure its strategic intent.

Finally, Air New Zealand would be more comfortable with SIA holding a larger (even majority) position in Virgin Australia than Air NZ would be with Etihad. Air NZ and SIA have broadly aligned interests – they have a JV – whereas Air NZ and Etihad are more distant even with a trans-tasman codeshare.

The Middle East outperforms IATA's global average on ASK growth. This region encompasses far more airlines than the big three network airlines, but they have come to define it. 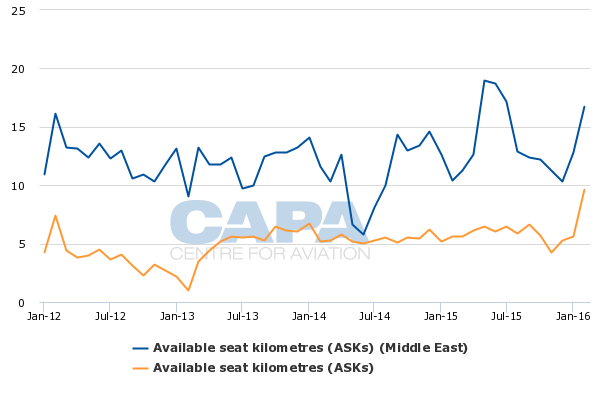 IATA's most recent traffic briefing, for Feb-2016, cautioned of over-capacity. Feb-2016 was the sixth consecutive month of capacity outstripping demand. RPKs were ahead of ASKs for all but one month of the first nine months of 2014. In the following 17 months, from Oct-2014 to Feb-2016, RPKs were ahead of ASKs in all but two months (Jul-2015 and Aug-2015). Since Sep-2015 is the six consecutive months IATA references.

Year-on-year change of ASKs and RPKs for international Middle East: 2014-2016 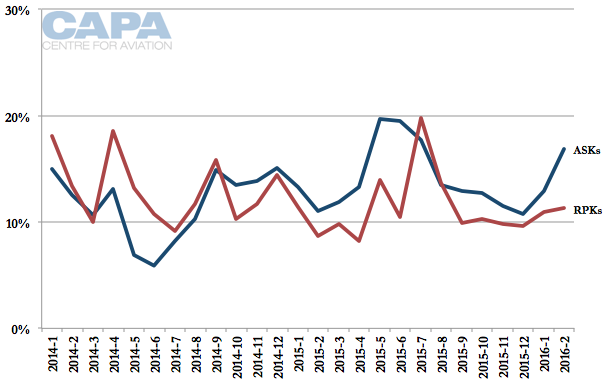 In the 20 months between Jul-2014 and Feb-2016, load factors have decreased for 16 of those months, including the six consecutive months since Sep-2015. 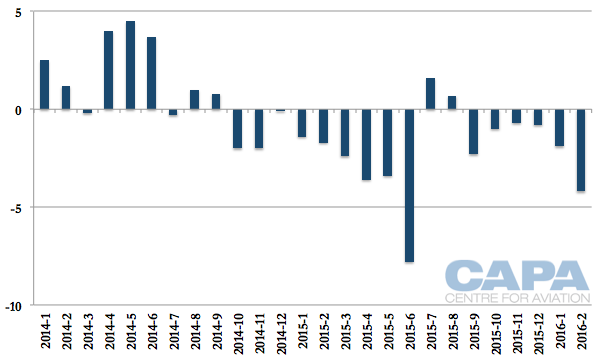 In late-2014 load factors started to fall to recent lows. Mid-2015 saw a brief period of record load factors for recent times, but since Sep-2015 load factors have fallen below recent highs and are well below IATA's average.

Detailed analysis is not possible since Emirates, Etihad and Qatar do not report monthly traffic. The aggregate total from IATA is also impacted by the numerous other airlines in the region. Strategic route launches with poor performance could be dragging down strong performance elsewhere on the network. When viewing network performance as a total, a few rotten apples can spoil the lot. 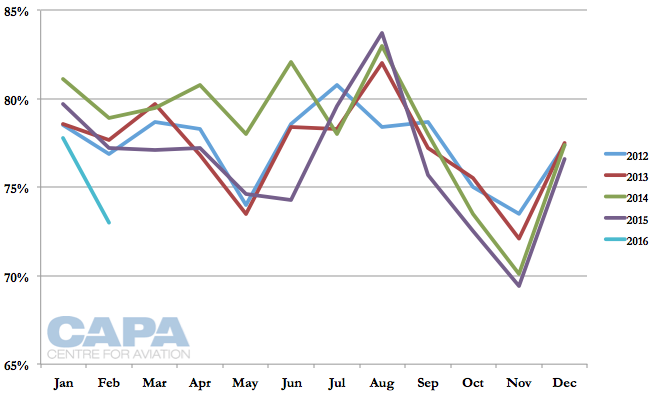 Etihad is slowing growth against internal factors, not competitive outlook, but the accelerated growth from Qatar Airways could pressure the growing over-capacity. Adding to pressure is that's Qatar's expansion could provoke competition responses, exacerbating growth.