Part 1 of this report on Greece reviewed the status of these key industries, which account together for over a fifth of the country's GDP and in many ways represent one of the key areas of hope for Greek employment and economic growth.

The other part of the equation is the ownership of the country's airports, still mostly in government ownership.

On 11-Jul-2015, the European Union delivered a new bailout offer to the Greek government; this included a requirement to sell down a range of government owned infrastructure, including its airports. This offer is still subject to ratification on both sides, but if finally agreed should stimulate considerable interest from investors.

As Part 1 described, passenger growth at several of these airports has been impressive over the past two years, generating some hopes for strong valuations. The Greek air travel market comprised 38.6 million passengers in 2014, an increase of 15% over 2013, as new airline capacity was added, largely by Aegean and Ryanair.

Until 2014 only one airport in Greece had gone through any sort of privatisation, and that was Athens International Airport (AIA). AIA was established in 1996 under a 30-year concession agreement.

The airport itself was constructed in preparation for the 2004 Olympic Games and opened on 28-Mar-2001 as a PPP between the government (55%) and the private sector (45%). The allocation of equity today is as in the chart below. 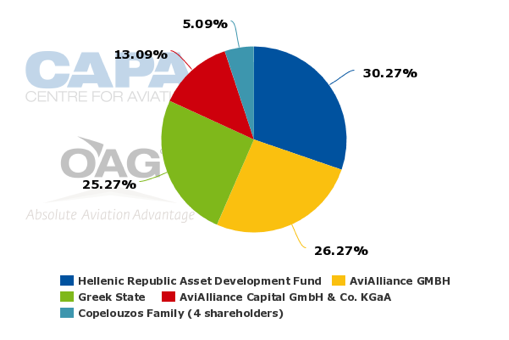 (Note: all figures are approximate to within 1% and are restricted to 2 decimal places. For full details see the entry for Athens International Airport in CAPA Airport Profiles).

The previous Ellinikon Airport was closed down and latterly sold off for other purposes.

Hochtief Airport had weighed up the value of continuing with the Athens investment prior to the PSP deal and for its part the Greek government has considered a full or partial IPO on its stake on several occasions during at least the last five years, on each one the economic situation ultimately prevailing.

Equally the privatisation of some of the regional airports (again by concession) had been considered over a period of several years but they lacked investor appeal owing to the negative effect on both in and outbound travel brought about by the sovereign debt crisis, ultra high unemployment, and – even in 2013 - the possibility that the country might leave the European Monetary Union and the breakdown of civil order. Traffic figures at the time were in decline.

Greece's airports are/were to be privatised in groups

It was only when the lure of cheaper holidays began to attract vacationers back to Greece and the country edged out of recession that investors began to take seriously a clutch of disposals that took the form of 21 regional airports plus 16 ‘options’ – mainly those on the islands – being split into two groups to be conceded to private investors for a period of 30-35 years.

The plans were drawn up by the then Development Minister Costis Hatzidakis, and state privatisation fund (TAIPED) CEO, Yiannis Emiris. Each group had one or more ‘anchor’ airports such as Thessaloniki (Greece’s ‘second city’) and Corfu; and Rhodes, which was considered to be the jewel in the crown.

In the early days it was not anticipated that a concession deal would generate much revenue for the state; one estimate even put it as low as EUR65 million, as only four of the 37 earmarked airports were profitable.

The airports business then underwent a renaissance. Having lost two million passengers between 2011 and 2012, the total went back up again by more than that amount in 2013 as the tourists continued to return.

Fraport and Copelouzos made the successful bid, at a seemingly high price

The winner was Fraport/Slentel (a unit of Copelouzos group, which is already a minority shareholder at AIA), with a bid of EUR1.234 billion (USD1.5 billion) up-front, an annual lease payment of EUR22.9 million for the life of the concession, annually adjusted according to CPI, and investments of EUR330 million over four years; a far cry from the originally suggested figure of EUR65 million for the lot.

The Greek general election, and the arrival of Syriza, intervened

Fraport made a statement early in Feb-2015, in which it said it expected Greece’s new government to honour its contract with the company for the operation of the airports.

It had not received any ‘negative signals’ from its contract partner but there was a “clear timeline” with the goal that the transaction is closed in Oct-2015. That soon changed. The Syriza government stated on 14-Feb-2015 that it intended to ‘review’ the agreement and that the contract was not yet ratified.

In the following months the closure of the deal became an on/off/on/off affair with a final agreement likely to be, at best, postponed until early 2016. That was allowing for the looming likelihood of a ‘Grexit.’ It is of course highly unlikely that Fraport’s position was helped by the unpopular image of German Chancellor Merkel in Greece.

As of 12-Aug-2015 Fraport is still embroiled, along with Copelouzos, with the Greek government over the terms of the deal. Vague commitments to it have been made by the government but on the contrary there have been messages suggesting:

On the other hand, the Hellenic Republic Asset Development Fund, which is charged with maximising the proceeds of the Republic from the development and/or sale of assets, is reported to be satisfied with Fraport’s offer.

The third bailout deal imposes an asset disposal condition, including sale of airports

During Jul-2015 though, the impasse was overtaken by events. Under the terms of the new (third) bailout deal (EUR86 billion) which should be ratified if formal bail out negotiations are successful and are approved by the Bundestag in Germany, not only must Greece agree to further pension cuts and the raising of tax rates, it must sell off its assets, estimated at EUR50 billion (USD55 billion) or more to a special fund administered by the creditors, for eventual privatisation. (They had wanted it to be in Luxembourg, but allowed Prime Minister Tsipras one concession).

These assets include ports and shipyards (such as the once mighty Piraeus, which fell foul of illegal subsidies according to the EU, leading to the closure of its dry-dock facility) and airports.

The airport option includes not only the regional/island ones but also the government’s stake in AIA that it has vacillated over for years.  To use New York retail parlance, Greece is required to sell out to the bare walls.

The new plan expects EUR25 billion of the EUR50 billion raised to be poured into Greece's struggling banks, with EUR12.5 billion used to pay off debt, and the remaining EUR 12.5 billion to boost the economy through investment.

These sales and concessions will almost certainly be pushed through this time: the Hellenic Republic Asset Development Fund has so far only raised EUR 3.5 billion, a huge shortfall that is unacceptable to creditors. Other assets that have been sold so far include OPAP, the Greek betting agency, but there are few of them.

Apart from ports and airports the partly state-owned telecommunications company OTE, Greece's Public Power Corporation, and the Independent Power Transmission Operator (ADMIE) are among the enterprises the government might put up for privatisation.

Previous governments were also looking at selling its 35.5% stake in the Hellenic Petroleum, which operates three refineries in Greece, and its 90% stake in the Hellenic Post. Just about the only thing not for sale is the Acropolis although – believe it or not – entire Greek islands, nature preserves and even some of ancient ruins are expected to be considered.

Taking all this into account it would appear highly likely that transport-related assets will now figure much more highly on the disposal wish list.

But even then there may be some renegotiating for the likes of Fraport to do. Many Greek assets have lost value in the last five years as the crisis wiped out 25% of Greece’s GDP. That EUR65 million figure may not look so inappropriate after all.

And of course, ultimately, the ‘bail out’ could still very easily continue to go wrong. Some observers, including ex-Finance Minister Varoufakis, and various politicians and academics, believe the latest bail out is doomed. Others went so far as to suggest that a temporary Grexit from the Euro was still on the cards, which would evidently upset the apple cart where any negotiation on airport valuation took place.

Away from the regional airports the fate of AIA is still unclear. The Hellenic Republic Asset Development Fund (HRADF) launched at the beginning of Dec-2014 the privatisation process for Athens International Airport with the announcement that it has commissioned an independent consultant to assess the reasonable value of the rights to operate the airport for 20 years.

The TAIPED plan was for the existing concession contract, which expired on 11-Jun-2016, to be extended to 11-Jun-2046. The current process was expected to start in 1Q2015 but it should come back on the agenda on or before 4Q2015. TAIPED had tried in 2011 to sell the same operational rights for around EUR200 million.

The other ‘opportunity’ which is stalled by the macroeconomic malaise is the scheme to finance, develop, and operate a new EUR800 million (USD870 million) airport at Kastelli, near Heraklion, on the island of Crete, under a 37-year concession.

The government has already sought bids, which were due by 16-Dec-2014, for an opening in 2018 when it would handle seven million passengers per annum, mainly tourists. Chinese, French, German and Spanish firms made up an international brigade of interested parties. Kastelli would become Greece's second-biggest airport and the government had offered USD301 million toward the cost of the project.

The government issued the first licences for water airports in Greece in Feb-2014, with the aim of improving connectivity in coastal areas.

There is no timetable, but there is now urgency to move

Assuming the bailout terms are accepted by all parties, there should be no hindrance to moving forward with the process of sales. It is undoubtedly a positive that there is such strong and continuing airline capacity growth.

Given Greece's reluctant history in the past there will obviously be some hiccups and some lingering opposition, but the stars appear to be aligning now.

Greece plans to move rapidly to privatise its regional airports, as well as other infrastructure assets, under am MoU agreed with its international lenders. The MoU lists a range of measures that the Greek Government must implement in order to obtain a new three-year bailout programme that is expected to total around EUR85 billion. Greece has committed to the sale of the country's regional airports "at the current terms" with the winning bidder (Fraport) already selected, according to the MoU.