A discussion about Brazilian – or even South American aviation – is incomplete without Gol, with its low-fare strategy, and TAM, with a legacy strategy complete with regional airline feeder in Pantanal and membership in Star Alliance. TAM’s measured and targeted growth contrasts, however, with Gol’s dramatic rise. Ironically, Gol was built on the remains of Varig, whose demise paved the way for the successful entrance of TAM.

Even so, the two airlines are really different sides of the same coin, both prioritising on building domestic networks, while TAM uses its Star Alliance partners to build access to the world. Now, with its pending merger with LAN – to be called LATAM but still operated as separate entities to comply with foreign ownership rules in bilateral agreements – the alliance strategy holds even greater importance, putting the entire industry on edge since so few powerful carriers in the league of TAM and LAN operate in Latin America.

Considering their differing strategies – TAM, building an empire to cover the South American map and Gol focusing on its Southwest-style model – the two share the Brazilian market almost evenly at 42% and 41%, respectively, although TAM has been losing domestic market share since 2006. It is on the international side where the gap really exists with 14% of international traffic traveling on Gol compared to the 86% for TAM. Gol’s international presence is limited to the region and includes points in Argentina, Venezuela, Chile, Bolivia, Paraguay, Uruguay, Curacao, Aruba and the Dominican Republic, compared to TAM’s service to North America and Europe.

Even so, they are still not making profits, although the second quarter was right in the middle of its weakest period.

Indeed, Gol bested TAM in operating profits, posting USD108 million in the first quarter, compared to TAM’s USD54.2 million. The results in 2Q-2010 were similar at USD32.3 million on a 14.1% rise in revenues and USD18.4 million on a 15.1% increase in revenues, respectively.

Not surprisingly, net results were similarly spread. Net loss for Gol was USD29.7 million for the second quarter, a dramatic decline from the year-ago period when it posted a USD313.6 million profit, against a USD87.1 million net loss at TAM, an equally dramatic swing from the USD202.3 million earned in the year-earlier period. But that is hardly a fair comparison given their differing networks and fleets. 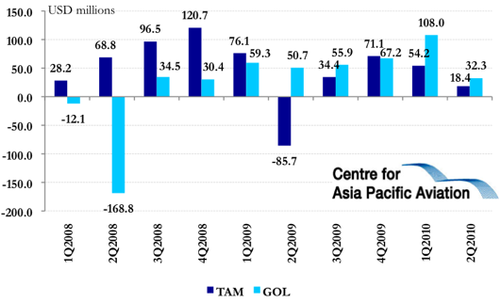 Revenue per available seat kilometre, on the other hand is a different story. The two carriers have been running about neck and neck since 2Q-2009, with TAM slightly edging out its LCC counterpart in RASK. 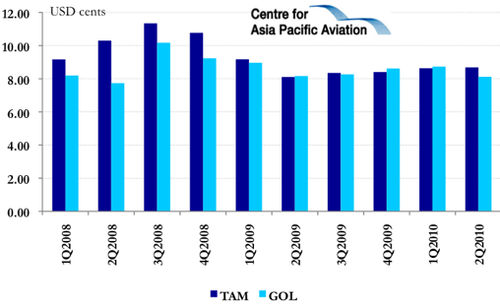 Built on the back of a successful bus company, Gol maintains an advantage with its intimate knowledge of the very passengers that will fuel the continuing double-digit growth of Brazilian airlines.

Gol is intent of bringing air transport to Brazil’s growing middle class even allowing passengers to pay for flights over time. Its strategy of concentrating on a single role and doing it the best it can, differs from TAM, which has a (more typical, for Latin American airlines) broad range of aviation-related subsidiaries including vacation packages, cargo, corporate aviation offerings and maintenance, repair and overhaul businesses.

Gol’s single-aircraft type fleet, shown to be so successful among low-cost carriers, also contrasts with TAM’s fleet strategy which, while largely Airbus single-aisle, also includes nine A330s and anticipates the arrival of 25 wide-bodies in the future, specifically 22 Airbus A350s and another three A330s. Gol is anticipating adding another 76 B737NGs between now and 2017 while TAM expects 73 narrow- and wide-bodies through 2012, including a four B777s in 2012, further complicating its fleet mix.

For that reason it is not surprising that TAM's costs are also higher than Gol’s and have been since 1Q-2008. It is clear both are executing cost reduction strategies achieving parity at about USD0.8 cents in the fourth quarter of 2009 but with a widening gap in the first and second quarters as Gol dropped below 8 cents and TAM rose to about 8.2 cents and 8.3 cents during the first and second quarters, respectively. 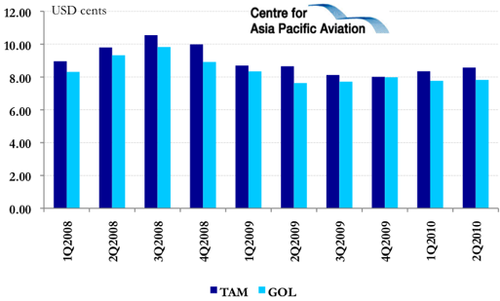 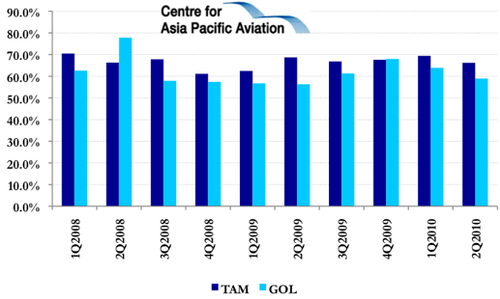 Source: Centre for Asia Pacific Aviation and company reports
*GOL 1Q2008 to 3Q2008 results are based on US GAAP

While the two carriers may be two sides of the same coin for now, TAM’s proposed merger with LAN will rupture this symmetry, as LATAM becomes the overwhelming powerhouse in the region, putting the merged company on par with the likes of Continental/United, Air France/KLM, BA/Iberia - and it is unlikely LATAM will stop empire building in the next decade.

Just the current proposed merger puts pressure on others in the region which, no doubt, will increase in the coming years. But, as with the North American mergers, opportunities are likely to emerge for low-cost airlines.  Gol is currently the third largest airline group behind TAM and LAN, although it has spread out to connect the vast Brazilian market to other countries in Latin America.

American’s oneworld – which includes LAN – still leads in the South American market. TAM, on the other hand, is in the Star camp and, with the merger, the reason it insisted on maintaining its alliance with LAN suddenly becomes more than just the feeder role they play with each other.

In the future, the strategies of Gol and TAM will diverge further as the South American aviation market continues to evolve. There is a role for both, though the market power of TAM-LAN may make for a near-invincible force. Meanwhile,

Gol's superiority in its low cost sphere is increasingly being challenged by the Neeleman upstart LCC, Azul, now with over 5% of the domestic market. Hardly a major threat yet, but the new entrant is on a trajectory that will be unwelcome. That, however is the typical BRIC growth sector, so there is as yet no prospect of any market share involving a zero sum game. This is a big pie and, with low costs, there will be plenty for Gol to chew on for some time to come.