Also in the month, GOL reported double-digit load factor improvements across the board, with total system load factors jumping 14.8 ppts to 72.6% (domestic load factors improved 14.3 ppts to 72.5%, with international load factor gains of 15.6 ppts to 64.6%).

Load factor improvements occurred as GOL recorded year-on-year traffic (RPKs) growth of 41.1% in the month, despite only an 11.9% capacity (ASKs) increase, driven by domestic and international traffic growth of 45.9% and 9.6%, respectively.

In Europe, easyJet (shares down 1.9%) confirmed plans to close its base at East Midlands Airport from 05-Jan-2010 and will also reduce its operations at London Luton Airport by 20%. Capacity will be relocated to “more profitable airports”, meaning easyJet will maintain its overall medium term growth target of 7.5% p/a.

The decision is part of easyJet’s strategy of carefully targeting growth in markets from which weaker competitors are retreating in this period of recession. Through this strategy, easyJet (in its 3Q2009 financial report) stated it is “building strong, defendable market positions that will ensure it is well positioned for profitable growth once the European economy improves”. 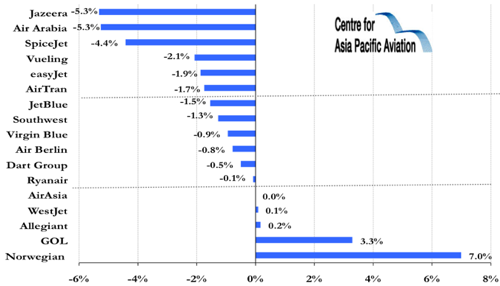