Indian PM, Manmohan Singh, inaugurated the USD2.7 billion Terminal 3 at Delhi Indira Gandhi International Airport on 03-Jul-2010. The terminal took 37 months to complete and is scheduled to commence operations on 14-Jul-2010. The airport has capacity to handle 34 million passengers p/a, with plans to handle 60 million passengers p/a by 2020. Indian Minister for Civil Aviation, Praful Patel, said that India has “never been recognised as able to build an infrastructure project on time, but we have demonstrated that we are capable of beating anyone else and on this massive scale”.

The Indian PM also stated the regulatory and policy framework needs to be aligned for the Indian civil aviation sector to stimulate investment of up to USD120 billion by 2020.

Meanwhile, GMR announced the submission of a pre-qualification bid in the tender for Saudi Arabia’s Medina Airport, in which it would participate with Turkish partner Limak.

Last week, GMR announced the consortium comprising Malaysia Airports Holdings Berhad (MAHB) and GMR Infrastructure Limited (GMR) entered a concession agreement on 28-Jun-2010, with Maldives Airport Company Ltd and the Republic of Maldives for the rehabilitation, expansion, modernisation, operation and maintenance of Male International Airport. Construction is expected to commence mid-2011 and must be completed no later than 01-Jul-2014 at an approximate cost of USD373 million.

Of the listed airports and operators, Aeroporto Toscano (+5.6%) rose sharply, while Beijing (-6.9%) slumped. 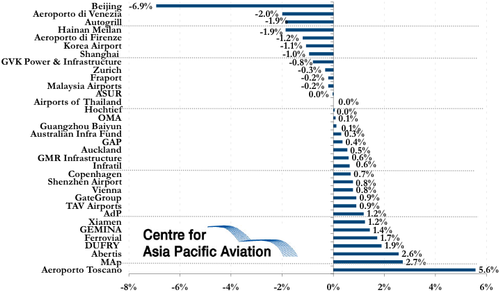