GMR gets go-ahead to develop and operate Bhogapuram Airport

Life goes on; business goes on – or at least, it is doing so in India, where one of the first announcements concerning an airport development and privatisation deal for over a month was made on 13-Apr-2020. Namely, the contract to develop and extend Bhogapuram Airport, a new international airport construction project for the Indian state of Andhra Pradesh.

In its own little way, the announcement about this 40-year concession has the same gravitas as the Chicago Convention, which met in 1944 to shape the future of the post-war aviation industry.

At least this transaction acknowledges that there will be an aviation industry in the future –  there has been one view spread about that aviation was about to go the way of the dinosaurs.

One of four new airport project approvals from Sep-2016

On 13-Apr-2020 GMR Airports Limited (GAL) received a Letter of Award (LoA) from the Government of Andhra Pradesh for a contract to develop and operate Bhogapuram Airport.

The contract covers a 40-year term, with the option to extend for an additional 20 years. The Andhra Pradesh Government had already created a special purpose vehicle for the project, Bhogapuram International Airport Corporation Ltd., with authorised share capital of INR500 million (USD7.9 million).

In Feb-2019 GAL had emerged as the highest bidder for the project on a public-private partnership (PPP) basis. The project involves the design, building, finance, construction, development, upgrading, modernisation, operation and maintenance of the greenfield airport through an international competitive bidding process, with GMR Airports Limited having a Right of First Refusal (RoFR) of 10%.

Traffic growth has been high at times, but not at others

Referring to the existing civil enclave at Visakhapatnam Naval Airfield (aka Vizag), the government said that it had handled 2.78 million passengers and 4400 tons of cargo in the calendar year 2019. Over the past five years, passenger traffic there has grown by 21% CAGR, and the airport ranks fifth among the custom airports in India in terms of cargo traffic. 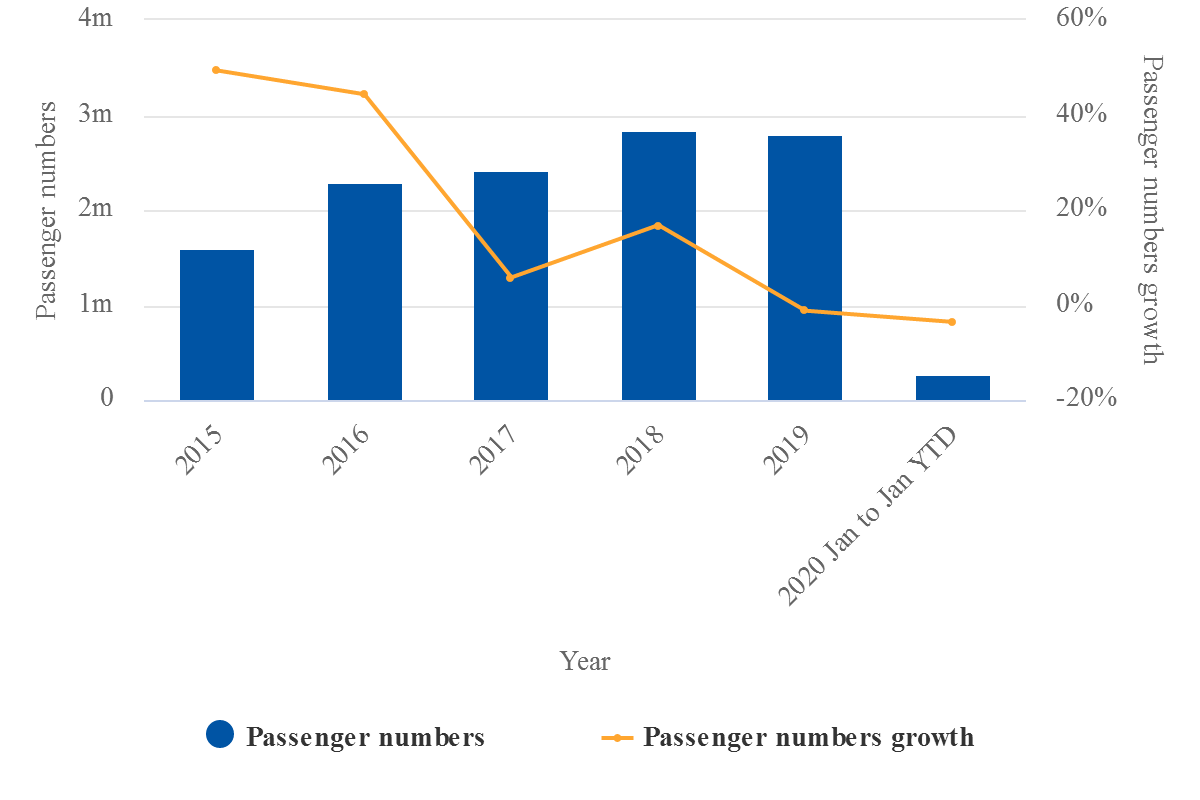 Visakhapatnam Airport is only a domestic airport and the main carrier is Indigo.

The airport's development includes 2558 acres of land and will feature facilities capable of handling A380 services, although whether those will actually ever be needed now is another matter.

Vague talk of an ‘aerotropolis’

The project will include airfreight facilities and cargo infrastructure and there has been vague talk of an ‘aerotropolis’ around it. In fact, one already exists, even if not on a global scale, as revealed below.

The airport is being constructed in two phases.

Phase one will have a terminal handling capacity of 6.3 million ppa upon completion. Phase two will have a capacity of 18 million ppa. Construction is being financed by loans from the Andhra Pradesh state finance department, HUDCO.

The site is strategically located on the east coast and, according to the government, it stands to “benefit from the vast catchment area surrounding the region”.

Location of Visakhapatnam in relation to major Indian cities

International tourism could be kick-started by the new airport

Moreover, a ‘beach corridor’ development is under way in proximity to the proposed airport, which will provide impetus to retail and hospitality developments in the region. This part of India is not well known for tourist development – at least, not of the international variety – as most of that is focused on southwestern India (Goa, Kerala etc.).

Domestic tourism seems to be a very important factor in the economy, though. Tripadvisor goes so far as to list the top five beaches in the area. The city is particularly known for its beaches, and also for its caves, temples, scenic viewpoints, the Indira Gandhi Zoological Park, and even a submarine museum.

Visakhapatnam is one of the greenest cities in India, with more than 30% of its land area forested or set aside as parkland. There are numerous wildlife conservation sites and geo-heritage sites. It is referred to by many nicknames, such as The ‘City of Destiny’ and ‘The Jewel of the East Coast’.

Visakhapatnam is the largest city of Andhra Pradesh, with well in excess of two million people and in the top 10 contributors to India's overall GDP.

It is the fifth busiest cargo port in the country, with sea fish exports at the top of its activities. It has been selected to be one of India’s ‘smart cities’ for digital/IT development. That comes on top of established pharmaceutical and heavy industry such as several ferroalloy plants, which draw on the copious availability of manganese ore.

In other words – the city seems to be a viable spot for investment in a new airport in these “uncertain times.”

Just what can be achieved for tourism in a ‘post-virus’ world –  whenever and whatever that is – is still an unknown, but global-level events can influence tourism.

This is an outcome that Iceland knows only too well: its tourist appeal skyrocketed in the aftermath of the Apr-2010 volcanic eruption, only for the country to be overwhelmed by visitors in recent years to the point where it became more like an occupation of the country.

The region could be attractive to a new breed of tourist

The situation is a little different here. There will probably be no mass international tourism for a long time, and does the city have the infrastructure to cope with it anyway?

However, a ‘new tourist world’ could well offer the opportunity for entrepreneurs to market the unknown city-region to what will inevitably be a new breed of ‘eco-tourist' – as long as there are tour operators prepared to take a gamble on it.

The cost has almost doubled, but land acquisition has not been a sticking point

The development was first announced in Feb-2015. Construction started on 14-Feb-2019 with the laying of the foundation stone.

The project will require an estimated investment of INR42.1 billion (USD551.2 million at 15-Apr-2020) and phase one construction works are expected to be completed by Dec-2020.

That project cost is much greater than the original estimate of INR23 billion.

As with most Indian greenfield airport projects, land acquisition has proven to be a sticking point, though not to the same degree as in some other cases. In fact, by Nov-2017 the Vizianagaram district had acquired 80% of the land required and had accelerated the acquisition process for the remaining 250 acres.

A big part of the land acquisition procedure is getting environmental clearance, and again, that was achieved quite early in the procedure. In Apr-2017 India's Ministry of Environment, Forest and Climate Change Expert Appraisal Committee (EAC) provided environmental clearance for the airport’s construction, after “detailed deliberations”.

At the same time, delays can arise out of the allocation of nearby land for residential purposes, and that has been the case at Bhogapuram, where the delay was caused by stalled progress on a nearby residential housing complex.

GMR Group was not the sole bidder. Others included GVK Power & Infrastructure Ltd, which informed the state government in Aug-2017 that it no longer planned to participate in the tender process, and Airports Authority of India. Others that showed interest included Adani Group, Essel Infra and Tata Group.

GMR made the highest bid for management and development of the Bhogapuram Airport.

A new system is in operation, by which the organisation that will pay the highest per-passenger fee wins. But it has already produced an anomalous result, with Adani Group bidding very highly for the concession on another five airports in total and winning easily on each one, while GMR’s was the highest for the management and development of the greenfield airport in particular.

The bid system was reported in the sister publication Blue Swan Daily in Mar-2019.