IATA reports that passenger volume turned positive in Sep-2009, the first positive figure for 12 months. However, the good news has been overshadowed by a caution that the revenue environment for airlines remains “extremely challenging” and that capacity increases, low levels of aircraft utilization and the large number of planned aircraft deliveries could threaten any recovery in fares and yields.

Sep-2009 international passenger traffic (RPK) growth was led by airlines in the Middle East, with a remarkable traffic increase of 18.2% year-on-year, outstripping a 15.2% capacity increase. Asia Pacific international traffic was also positive, up 2.1%, even as the region’s carriers cut back capacity by 4.2%. 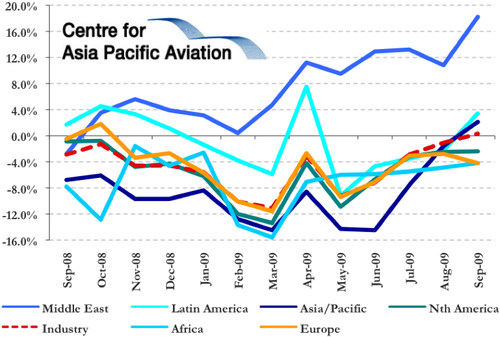 However, with the economic recovery in developed economies lagging the rebound in developing nations, Europe and North American passenger traffic is yet to show the same recovery. European airlines saw RPKs drop 4.2%, as they cut back capacity by 5.2% (the strongest reduction of any region worldwide). North American airlines saw international traffic 2.4% lower, but still managed to cut capacity levels by 5.1% in Sep-2009.

Load factors have returned to 2007 levels, and average fares are climbing back from the deep declines seen earlier in the year. However, the pace of improvement is slow, and the recovery in fares is lagging the recovery in volumes. 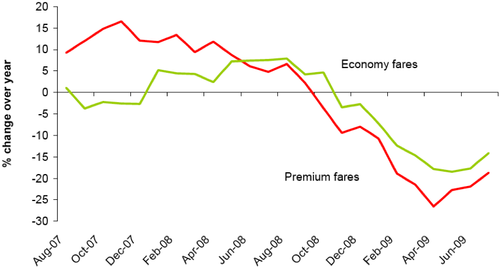 Freight is improving faster than passenger traffic, but “has a deeper hole to climb out of”. International FTKs were down 5.4% in Sep-2009, while ATFKs were 8.5% lower. Only Latin America and the Middle East are showing increases in international freight volumes.

Airlines were unable to cut capacity to match the falls in demand over 2009. With demand returning, conditions are improving, but IATA questions whether airlines, which have kept the level of capacity cuts flat through the year, will have the discipline to continue to restrain capacity.

Capacity cuts have been made through reducing aircraft utilisation, rather than grounding large numbers of aircraft. Narrowbody utilisation has declined 3% over the year, while widebody utilisation has fallen 4%. At the same time, carriers have taken delivery of more than 910 aircraft this year, and have grounded just under 370 aircraft (213 retirements and another 156 to storage). Overall, the global commercial fleet has expanded 2% in 2009.

IATA notes that published Winter schedules suggest some increases in capacity may be forthcoming. This could potentially undo some of the recent improvements supply-demand conditions for carriers. On top of this, new aircraft deliveries were better than 100 aircraft in Sep-2009, outstripping retirements/groundings. Both Boeing and Airbus expect to match or better 2008 delivery rates this year, meaning capacity overhang is still a major concern.

Oil prices have jumped again in Oct-2009, after a short period of relative stability, further squeezing airline cash flows. Oil approached USD85 per barrel in Oct-2009, and is now better than 25% above prices at this time last year. However, a lower crack spread means that aviation fuel prices are generally level, or only slightly above, the same time last year. 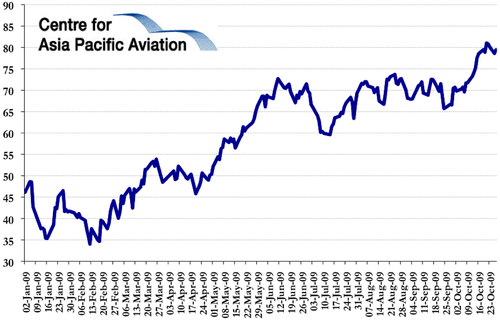 With stronger capital markets, airlines have been able to build up a substantial cash cushion over the past few months, raising almost USD8 billion in new funds. Larger carriers now have a “good cash cushion and the ability to finance much needed restructuring, if regulators allow”.

Early 3Q2009 financial reports have shown some improvement (excluding the US). However, IATA has maintained its overall forecast for 2009 losses of USD11 billion.