Gibraltar seeks expansion of route network into the ‘Spanish hinterland’

A complex situation existing between the European Union, the UK and the British Overseas Territory of Gibraltar has isolated that territory from direct European air services since the UK left the EU.

Now, mindful of Gibraltar’s proximity to Spanish mainland vacation resort cities, the Gibraltar government is hopeful that the territory may be able to sign up to the Schengen Agreement before the end of 2022.

Gibraltar's Minister for Business and Tourism Vijay Daryanani said recently that an agreement for the British territory to enter the EU's Schengen area would make it more attractive for European airlines and enable an expansion of its route network. He added that Gibraltar is attractive to European airlines as a gateway "in the hinterland into Spain", with "no other airport within a 50 kilometre radius".

That membership would mean not only the potential for direct services from European countries, but also much easier cross-border travel, expanding what is essentially a ‘city-break’ destination into a gateway for established Spanish vacation regions.

Gibraltar's Minister for Business and Tourism Vijay Daryanani said recently that an agreement for the British territory to enter the EU's Schengen area would make it more attractive for European airlines and enable an expansion of its route network.

He added that Gibraltar is attractive to European airlines as a gateway "in the hinterland into Spain", with "no other airport within a 50 kilometre radius".

The nearest airports are Jerez to the northwest and Málaga to the northeast, both more than 50km distant, although the heliport at Ceuta, the Spanish enclave in North Africa, is about 25km away across the Strait of Gibraltar.

There is a great deal of tourism along the coast to the east in particular, with resorts such as Marbella and Estepona on the Costa del Sol, very much favourites of the British, as close to Gibraltar as they are to Málaga while tourist visits to the southern part of the Gulf of Cadiz on the Costa de la Luz are increasing as evidenced by steadily growing traffic at Jerez from full service, regional and low cost airlines alike.

The main AP-7 Motorway that stretches along the entire Costa del Sol and provides access to the Costa de la Luz is only 15 minutes away from Gibraltar. Approximately 60% of arrivals yearly are in transit to the neighbouring regions.

Furthermore, tourist visits to the southern part of the Gulf of Cadiz are increasing, as evidenced by steadily growing traffic at Jerez from full service, regional and low cost airlines alike.

Whether or not Gibraltar could enter the Schengen Agreement, which facilitates document-less travel between EU and EEA countries that have signed up to it, is a moot point.

The majority of residents of the 33,000 Gibraltar population voted to stay in the EU during the 2016 ‘Brexit’ referendum, but at the same time an even bigger slice of the population voted for it to remain a British territory the last time there was a referendum on that issue.

Since 2016 Gibraltar, which is strongly claimed by Spain, has become something of a bargaining chip in dealings between Spain, the UK and the European Union in various ways.

Tensions are high, and manifest themselves in what can be long delays at border crossings affecting residents as well as tourists. Many people, up to 16,000, cross to work every day from Spain into Gibraltar, which is comparatively rich, with shipping, tourism, and financial services (it has its own stock exchange), and with some people going the other way.

Critically, Spain successfully excluded Gibraltar from European-wide deregulation initiatives, such as the Single European Sky programme preventing direct links from Gibraltar to the European Union, on the grounds that no regulation that somehow recognises the sovereignty of the United Kingdom over the Gibraltar peninsula may be implemented without a previous agreement on the airport.

And Gibraltar could not have been part of the Schengen Agreement as part of the UK before Brexit because the UK was not a signatory to that agreement.

Even then, there are ‘exceptions’, as there usually are in international agreements. For example, Schengen visa holders from some countries may visit Gibraltar visa-free for up to 21 days, provided they have at least seven days remaining on the visa.

Gibraltar could join Schengen before the end of 2022

The most recent position is that Gibraltar might join Schengen, even by the end of 2022, if a new treaty can be successfully negotiated.

That treaty would abolish the border so that physical crossing between Gibraltar and Spain would be made much easier, thereby enhancing tourism prospects, which is much needed in a territory that was hit by the COVID-19 pandemic to the tune of more than GBP350 million.

Relations between the UK and EU have improved recently, and that is due in no small part to the exit from British government of several politicians who were at the forefront of Brexit negotiations.

But in any case, improving the state of the local economy in Gibraltar will take precedence over established political positions, and especially if a larger transborder regional economy can be allowed to flourish.

That will benefit both governments.

Gibraltar International Airport is a joint civil/military airport, hosting Royal Air Force aircraft in addition to commercial services from the UK, although the British military role is not what it once was. The airport is located 500m from Gibraltar city centre.

There has been no definable set pattern to passenger traffic growth at Gibraltar Airport during the past decade or so, with gains and reductions varying between 1% and 20% in different years – caused by start-up of new services and failure of airlines.

Between 2010 and 2019 the average growth rate works out at just 3.9%. A positive figure of over 11% was achieved in 2019 – far better than many airports in that strange pre-pandemic year – but it followed a reduction of 23% in the previous year.

Coincidentally, that average growth rate tallies almost exactly with that of Spanish airports generally in the same period (AENA airports), but the variation there was far more even over the years – as it would be where variances are spread over a wide network.

Such large differences at Gibraltar make planning more difficult. Moreover the traffic recovery in 2021/22 at Gibraltar lags that of the Spanish airports.

It is understandable why the airport management would wish to broaden its scope in this manner.

Gibraltar reached the 2019 seat capacity level in mid-Oct-2022, but did not have as many seats available during the summer of 2022 as it did during 2021 (when 2019 levels were exceeded). That is a peculiarity that was not repeated in Spain generally or locally (e.g. Málaga Airport).

British Airways and easyJet are currently the only two airlines

At this point there are only two airlines operating at Gibraltar and both of them British – namely British Airways and easyJet.

Interestingly, British Airways is solely the peak-time operator as measured by movements, whereas easyJet has 94% of off-peak movements.

In total, easyJet has 70% of the capacity.

All flights at this time (northern hemisphere winter schedules) are to the UK only as specified above, to which there are five routes. 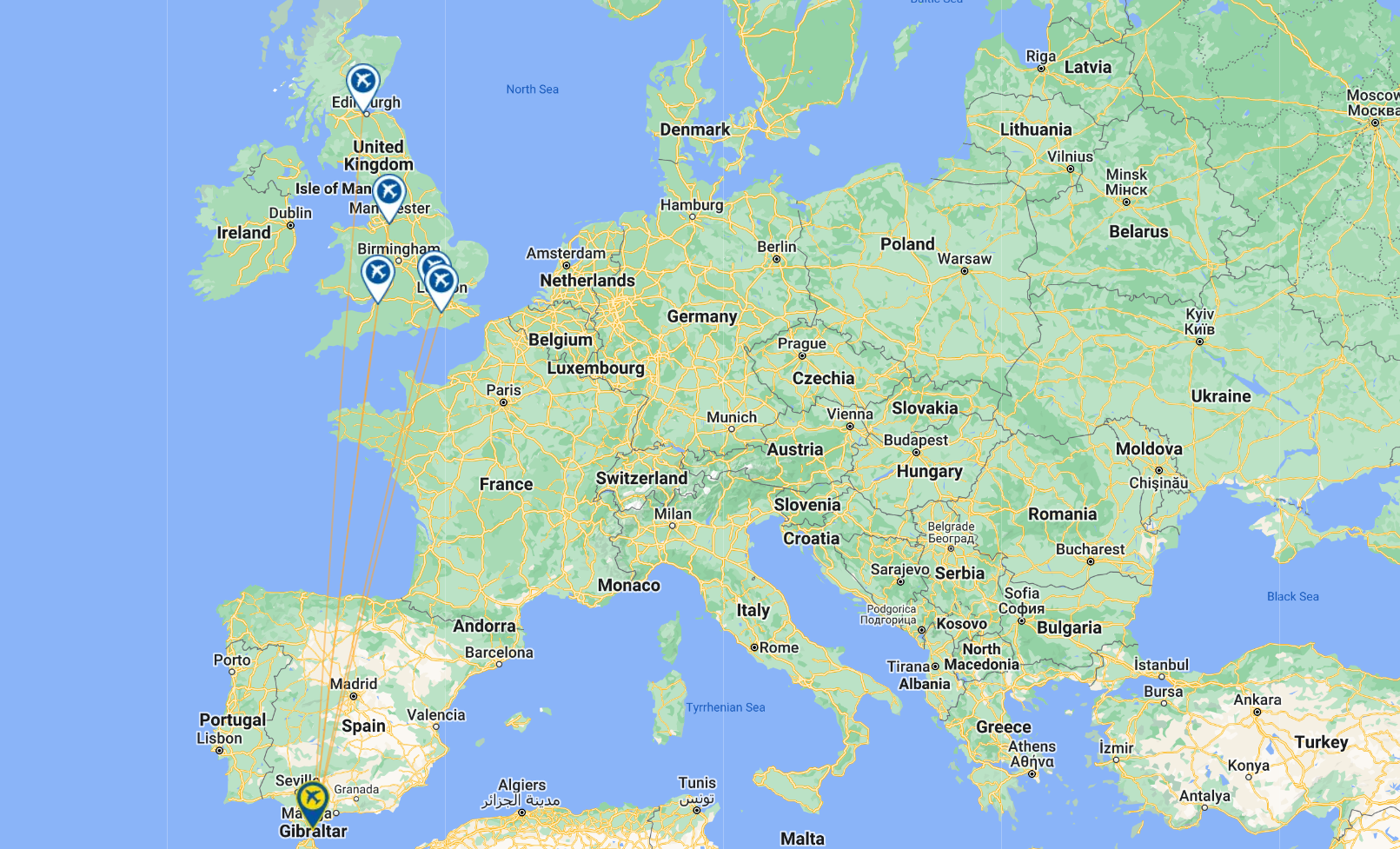 There have been Spanish airport routes

There have been routes to Spanish airports in the past (including Madrid and one proposed recently to Málaga) since the Córdoba Agreement in 2006, which ended all discriminatory restrictions on civilian flights to Gibraltar International, including the prohibition of flights over Spanish soil, and exclusion of Gibraltar from all EU agreements on air transport, allowing civilian flights from all nations into Gibraltar International Airport.

There have also been flights to Morocco over the years.

But the take-up has been slow, and the UK remains the premier market – indeed, the only one for the time being.

One of the benefits of British Airways’ presence is that connections are available at London Heathrow globally while easyJet has a major base at London Gatwick for self-connectors.

There is no other airline alliance participation, apart from British Airways.

Utilisation at the airport is light, and there are plenty of opportunities for airlines to take slots on every day of the week.

That utilisation can fall as low as just three hourly blocks in use by arriving and departing aircraft on any one day, and a maximum of eight blocks.

That utilisation needs improving, and winter services need bolstering. New routes from airlines such as Eastern Airways (UK) and Wizz Air have been introduced and suspended during the past year, and a BA CityFlyer service from London City is only seasonal.

Potential for frequency increases and new routes from the UK, also European services from specific countries

What new services and frequency increases could be expected?

Firstly, existing services and potential new ones could be attractive to people who are happy to make Gibraltar their base for a vacation or business trip, and who would welcome the opportunity for easier access to the Spanish mainland arising from a new treaty. That would help justify prolonging main season services into the winter from UK regional airports, possibly doubling overall capacity.

Secondly, apart from the British, neighbouring areas such as the Costa del Sol are attractive to Europeans generally, both for vacations and to live, with Swedes and Belgians top of the list. That suggests the potential for services from Stockholm and Brussels at least.

Ryanair is active in both cities, and its initial reaction to any new treaty is anticipated, especially as it operates extensively at Málaga (it is the airline with the greatest capacity by some margin) and at Jerez, to a lesser degree.

Ryanair could be the bellwether, for better or worse

As has often been the case, attracting Ryanair would be the yardstick by which future commitment by other airlines is judged. A Ryanair presence in Gibraltar could even lead to future base operations there.

Equally it could ‘scare off’ other LCCs that do not wish to compete in the same space – although most of them are more willing to do that these days.

As British Airways operates at Gibraltar it is possible that Iberia, which is in the same airline group, could also consider a year-round Gibraltar service, perhaps connecting with Madrid and Barcelona. It operates extensively at Jerez (as the biggest carrier) and less so at Málaga.

Gibraltar is something of a minor economic powerhouse for its region and that economy would undoubtedly expand as the result of any new treaty, which is always a stimulus for air services.

Outbound travel will count as well

Outbound travel needs to be taken into consideration as well as inbound.

The local population may only be small, but the economic nature of the territory suggests more business travel than might occur from other such small places while the catchment area population (60 minutes) is 500,000.

Gibraltarians could be expected to venture out to the other 26 European countries in the Schengen region more than before, and due to its close proximity, Spain will probably be the most popular of the group.

The two-day summit will tap into the post-COVID-19 aviation industry across the world to address the developments, challenges and strategic issues that have arisen throughout the year, and welcome leaders from across the globe to share an outlook for the industry in 2023 and beyond.

The focus for this year’s summit is the biggest trends which faced the aviation industry in 2022 and how they will influence strategies into 2023 and beyond. Global airline leaders will share their insights and perspectives on the changes in the aviation sector over the past year, how the industry has adapted and set development targets for the future.

Topics under discussion will include overcoming the pressures rising costs, the push for environmental sustainability, operational issues in a post-pandemic world, the varied paths of international recovery, government ownership, ongoing digital transformation, the role of partnerships and alliances, and much more.