The jump comes amid reports that its largest shareholder, Investimenti Infrastrutture, is considering another capital increase, aimed at cutting its debt and focusing on the re-launch of AdR.

Going against the trend was Vienna Airport, which closed down 4.3%.

Meanwhile, in the Asia Pacific region, Chinese airports mostly traded down yesterday, led by Beijing (-3.6%), Shanghai (-2.8%) and Shenzhen and Guangzhou, both down 2.6%. 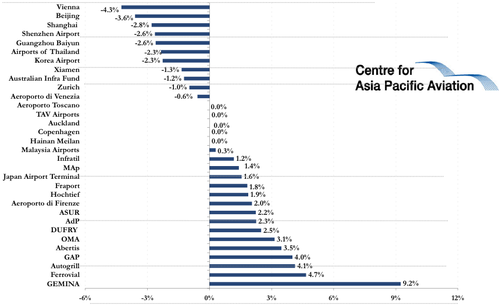