Garuda Indonesia is planning further expansion in Singapore with the Jun-2016 launch of services from Medan. The addition of Medan will give Garuda six routes from Singapore compared with only two three years ago, including two one-way links to Europe.

However, the re-establishment of a Singapore hub, which Garuda operated several years ago, is far from ideal and will likely be temporary. Competing with the Singapore Airlines Group, particularly on the Singapore-Amsterdam and Singapore-London routes, is challenging.

Garuda is resuming international expansion after restructuring its international operation in 2H2014 and 2015. International ASKs were up 11% in 1Q2016 but its load factor dropped to only 70.6%, an indication of the challenges that Garuda faces in the highly competitive international market.

After returning to profitability in 2015, following a difficult 2014 impacted by overambitious international expansion, Garuda remained in the black in 1Q2016. However, the parent airline recorded a 34% drop in operating profit for 1Q2016 to USD34 million, based on preliminary unaudited figures (see background information). Net income dropped from USD11 million in 1Q2015 to only USD1 million in 1Q2016.

The drop in profitability is a concerning trend given the decline in fuel prices. Fuel costs were down 32% to USD154 million, despite the growth in ASKs. 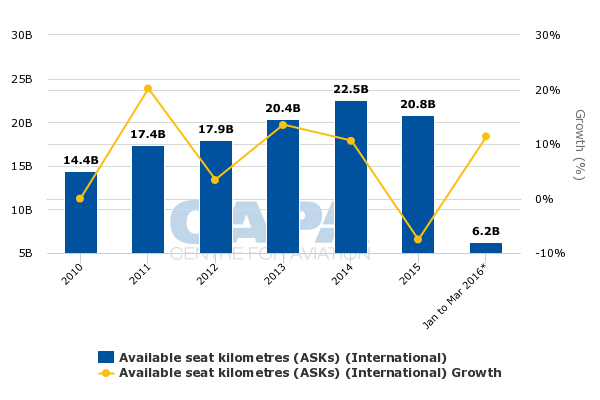 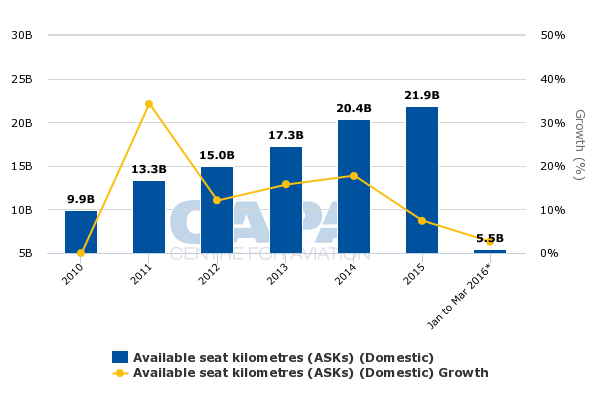 The drop in ASKs in 2015 came after Garuda restructured its scheduled international operation in 2H2014 and early 2015. Brisbane, Dili and Taipei were suspended and several planned new destinations were deferred – including Frankfurt, Manila, Mumbai, Nagoya and Paris. Garuda also cut capacity to existing destinations in Australia and Japan.

Widebody aircraft deliveries were also deferred in 2015 and Garuda decided to transfer a large portion of its widebody fleet to charters, a sensible move which contributed to the airline’s financial turnaround. Garuda’s charter operation generated USD53 million in revenues in 2015 compared with only USD12 million in 2014. International charters are generally profitable, with an average profit margin of 16% in 2015.

Garuda expands in China and Europe

Garuda is now evaluating potential new scheduled routes from Bali to China in response to growing inbound demand. Bali-Beijing, which was launched in early 2015, is currently Garuda’s only other scheduled route in the Bali-China markets, besides the newly launched services to Guangzhou and Shanghai.

The expansion in Saudi Arabia is similarly being pursued with a combination of new scheduled routes – including from secondary Indonesian cities – along with more charters. Garuda is also planning to launch charters to India in 2016, with the view to potentially serving the Indian market with scheduled services in the medium to long term.

For now, Europe is driving the biggest impact in ASK growth. Over the last year Garuda has more than doubled its European operation, from only five weekly flights in May-2015 to 11 weekly flights currently.

Europe now accounts for approximately 10% of Garuda’s international ASKs – nearly as many as are operated to Australia, which it currently serves with 33 weekly flights across six routes. Garuda deploys 777-300ER on all its European flights, while A330s are used to Australia. 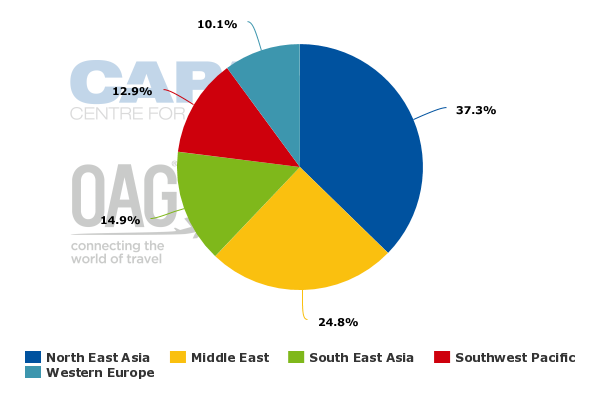 In 2015 Garuda served its two European destinations, Amsterdam and London, as part of a combined tagged route. London Gatwick was initially launched in Sep-2014 by extending Garuda’s five weekly Jakarta-Amsterdam flights to London.

As CAPA highlighted in the last analysis of Garuda in Nov-2015, in late 2015 after securing London Heathrow slots Garuda decided to decouple its two European destinations.

In Mar-2016 Heathrow was launched with five weekly flights on a Jakarta-Singapore-London Heathrow-Jakarta rotation. Garuda also added capacity to Amsterdam in Mar-2016 because all six of its weekly Jakarta-Amsterdam frequencies now turn around at Amsterdam and do not continue to another European destination. Three of these flights currently stop in Singapore on the outbound sector while the other three currently operate nonstop, although Garuda executives have previously indicated that all Amsterdam flights could potentially stop in Singapore to leverage the Singapore hub better.

Garuda also serves Singapore from Bali and Surabaya, with relatively quick connections available to its Singapore-London flights. Garuda retimed one of two daily Bali-Singapore flights as it launched Singapore-London, resulting in a 10:15 arrival in Singapore connecting with the 12:20 departure to London.

Garuda’s only Surabaya-Singapore flight lands in Singapore at 10:50, enabling a 90min connection to Singapore-London. However, Bali-Singapore attracts a significantly larger proportion of the connecting traffic to London – on average 40 to 50 passengers.

Garuda currently does not operate any Bali-Singapore and Surabaya-Singapore flights that connect well with Singapore-Amsterdam, which departs at 01:30. Garuda’s second Singapore-Bali flight lands at 18:20, resulting in an inconvenient seven hour layover for Amsterdam.

Garuda to launch Singapore-Medan, but without Europe connections

If Garuda decides to route all its Jakarta-Amsterdam flights via Singapore it will need to consider adding a second Surabaya-Singapore flight and retiming its second Bali-Singapore flight. It will also need to retime, or add, a second flight on the new Medan-Singapore route.

Garuda recently unveiled plans to launch services from Medan to Singapore with one daily flight launching on 14-Jun-2016. Oddly, the flight arrives in Singapore at 16:00, meaning that it will not connect with Singapore-London or Singapore-Amsterdam.

The Medan-Singapore schedule seems to indicate that Garuda is not serious about developing Singapore as a hub.

The current Singapore setup is far from ideal as the Singapore stop on European flights is only made in one direction. As a result it has been difficult for Garuda to capture traffic in the local Singapore-Amsterdam and Singapore-London markets, particularly business traffic. Passengers originating from, or heading to, Singapore must transit in Jakarta on the Europe-Singapore sector, which is inconvenient – particularly given the congestion at Jakarta.

Less than 10% of Garuda’s Singapore-Europe traffic originates in Singapore. This traffic is carried at extremely low yields since Garuda does not have a sufficient schedule or product to woo over higher-yielding traffic. In the main, Garuda has only been able to attract price-sensitive group traffic.

Garuda operates nine daily return flights between Jakarta and Singapore but only two of the Jakarta departures provide quick connections with the inbound flights from Amsterdam and London. As nearly all of Garuda’s Singapore flights are operated with 737-800s, a low-yielding tour group arriving in Jakarta from Amsterdam or London and travelling to Singapore can have an impact on Singapore-Jakarta profitability.

Garuda will likely remove the Singapore stop for Amsterdam and London once a runway improvement project at Jakarta is completed. As CAPA has previously highlighted, Garuda is now unable to operate more than three weekly nonstop flights to Europe due to pavement surface issues at Jakarta.

Jakarta Soekarno-Hatta Airport has been working to resolve these issues since 2013, when Garuda initially had to shelve plans to launch nonstop services to London. Finally, the airport is expected to complete an upgrade of the runway surface by the end of 2016.

Offering nonstops on all its European flights in both directions is sensible as it will significantly improve Garuda’s product from its home market of Indonesia, and from Australia. However, it will impact Garuda’s operation in Singapore. Garuda will also still face several of the same challenges now impacting its long haul operation, including intense competition and being a relatively unknown brand in overseas markets.

In Singapore, Garuda will need to work to bolster connections with partners if it is to maintain all its routes to Indonesia. Connections with SkyTeam and other partners such as India’s Jet Airways have enabled Garuda to improve its performance in the Singapore-Surabaya market since launching the route in Jul-2013, and also on Singapore-Bali since adding a second daily frequency in the same period. Singapore-Surabaya particularly struggled in the first year, incurring a large loss, and remains relatively marginal despite a significant improvement.

Singapore-Medan will also need interline and codeshare traffic to survive. Jetstar Asia and SilkAir – the only two airlines operating Singapore-Medan – have an advantage because a large portion of their Medan traffic connects beyond Singapore. However Garuda cannot come close to matching the network of SilkAir/Singapore Airlines or the network of Singapore-based Jetstar Asia, which has a large portfolio of interline and codeshare partnerships.

Following the launch of Singapore-Medan Garuda will offer approximately 35,000 weekly seats in the Singapore market. This will enable it to surpass Emirates and Malaysia Airlines as the sixth largest airline group in Singapore after SIA, Jetstar/Qantas, AirAsia, Cathay Pacific and Lion.

Garuda continues to face challenges in the international market

Garuda could face challenges in the Singapore market outside the core Singapore-Jakarta route, which has strong business traffic. Garuda had a hub in Singapore several years ago, with a number of routes from Indonesia (including Medan and Surabaya) connecting to international flights to regional destinations such as Beijing and Ho Chi Minh. However, the hub was costly to operate and became difficult to sustain as competition in Singapore intensified.

Garuda needs to focus its international operation and be cautious with expansion.

Singapore is now a fiercely competitive market – both regionally and on long haul routes. Expansion inevitably comes at the expense of yields and load factors, particularly on non-Jakarta routes.

Profitability for its scheduled long haul operation will not be easy to achieve, particularly with the current setup.