Garuda’s international load factor was only 70% through the first eight months of 2016 as the airline struggled to fill additional seats generated by an 18% increase in ASKs. International yields have also declined as Garuda swung back into the red in 1H2016.

The long haul network has particularly struggled, driving the drop in profitability. However Garuda is keen to continue strategic expansion.

Garuda’s international ASKs are up nearly 20% compared to 2015

Garuda currently serves 17 international destinations, including 14 in Asia Pacific, two in Europe and one in the Middle East (based on OAG schedules for the week commencing 3-Oct-2016). 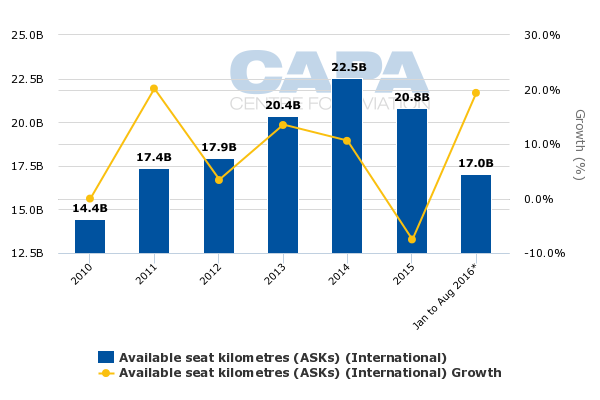 However, Garuda has struggled to fill the additional capacity. International RPKs were up 11.1% in the eight-month period, resulting in a 5.6ppt drop in load factor to 70.3%.

Rapid international expansion comes at the expense of yields and profitability

The rapid international expansion has also impacted Garuda’s yields and profitability. Garuda’s international passenger yield fell 9% year-over-year in the first eight months of 2016, including a 3% decline in Aug-2016.

Revenues were down 4% to USD1.764 billion despite the increased capacity. Revenues from scheduled services were down 3% in 1H2016 to USD1.564 billion.

A challenging international market was the main contributor to the swing in profitability. However domestic market conditions have also become difficult, impacting both the parent airline and Citilink. The LCC subsidiary, which only operates domestically, was profitable for the first time in its history in 2015 but was back in the red in 1H2016.

International loads are still above 2014 levels

This is not the first time Garuda has struggled when attempting to accelerate international expansion.

In 1H2014 Garuda posted an operating loss of USD234 million and a net loss of USD212 million, driven by a dismal performance in the international market following a period of overambitious expansion.

In 2016 Garuda’s international monthly load factor has generally been above 2014 levels but below 2015 levels. This indicates that the current situation is challenging but not quite as dire as 2H2013 and 1H2014, when the load factor was even lower and Garuda had steeper losses (due partially to higher fuel prices). 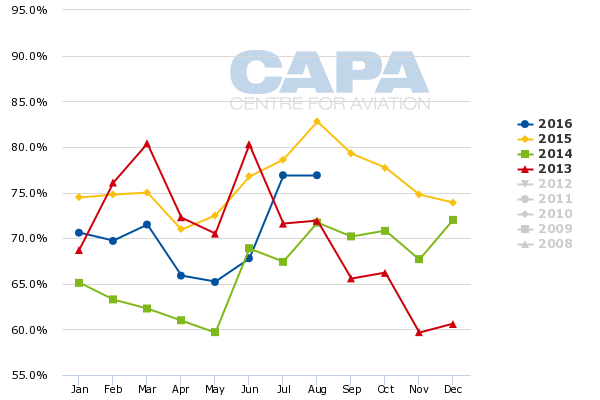 In 1H2014 Garuda’s international load factor, yield and profitability were impacted by capacity increases to Europe, Australia and Japan. In 1H2016 the capacity increases were focused again on Europe, as well as to China and Saudi Arabia.

The Europe region recorded the highest ASK growth in 1H2016, at 71%, but on a relatively low base. Garuda launched flights to London Heathrow in Mar-2016, with five weekly flights on a Jakarta-Singapore-London-Jakarta routing.

Garuda operates nine weekly flights to Europe, including six to Amsterdam and three to London Heathrow using three-class 777-300ERs. Three of the Amsterdam flights and all of the London flights stop in Singapore on the outbound sector, but all of the fights returning to Jakarta operate nonstop. (Garuda operated 11 weekly flights to Europe in 2Q2016 and 3Q2016, but has reduced London from five to three weekly frequencies from late Sep-2016 to mid-Dec-2016.)

Middle East ASKs were up 41% in 1H2016 as Garuda expanded in the Saudi Arabia market, with new routes to Jeddah from secondary Indonesian cities and a new seasonal service from Jakarta to Medina. (The Medina service is not operating in Oct-2016 and therefore Medina is not included among the current 17 international destinations.)

China has been another focus area, with ASKs up 39% in 1H2016. Across the rest of the Garuda international network, which accounts for over 70% of total international ASKs, capacity was slightly lower in 1H2016 compared to 1H2015. 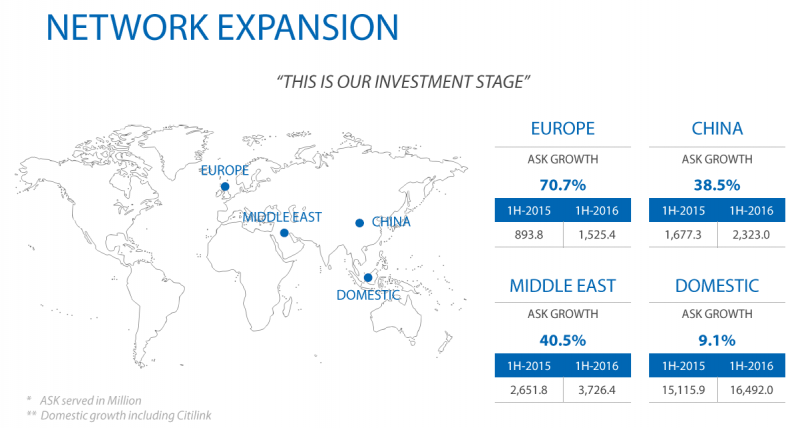 Garuda has not been growing in Australia or Japan

Australia accounts for approximately 18% of Garuda’s ASKs. North Asia flights excluding China account for the the remaining 35%, including approximately 19% for Japan, 9% for South Korea and 7% for Hong Kong.

Garuda has maintained relatively flat capacity to Australia since implementing reductions in early 2015 as part of its previous restructuring exercise. Garuda’s Australia capacity was down slightly in 1H2016 due to the impact of reductions, including the suspension of Brisbane, that were implemented in Feb-2015.

Garuda also dropped Taiwan and cut capacity to Japan in 2014. Its Japan and South Korea capacity has been relatively flat over the last year. 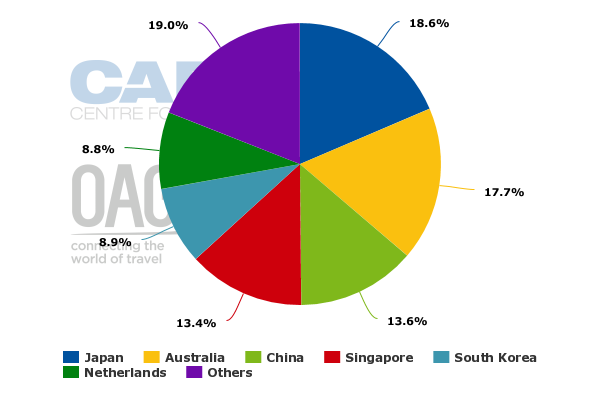 In North Asia, Garuda has only increased capacity in 2016 in Hong Kong and mainland China.

Bali-Hong Kong, which is served daily, was upgauged from 737-800s to A330-300s in Mar-2016. Garuda continues to serve Jakarta-Hong Kong with two daily frequencies using a mix of narrowbody and widebody aircraft.

In early 2016 Garuda also launched flights from Bali to Beijing and Shanghai. Bali-Guangzhou was launched in late 2015.

Garuda is upgrading Denpasar-Guangzhou to daily A330-300 service from the end of Oct-2016. At the same time it is also upgauging Bali to Beijing and Shanghai from A330-300s to two-class 777-300ERs, and adding a fourth weekly flight on Jakarta-Beijing.

The upcoming changes will result in almost a 50% further increase in Garuda capacity to China. Garuda’s seat capacity to mainland China is already up approximately 50% year-on-year, driven by the launch of services from Bali to Beijing, Guangzhou and Shanghai. 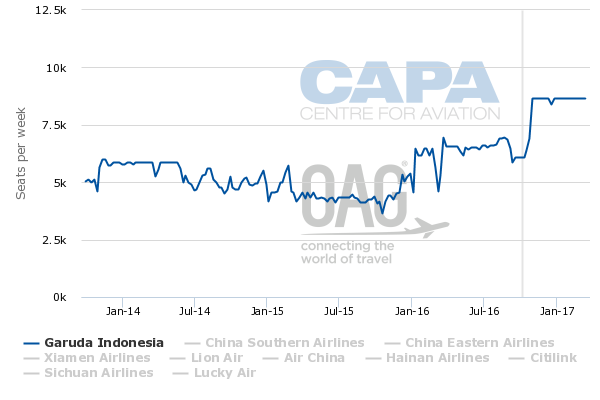 Note: Bali-Chengdu flights are planned from early 2017 but are not yet captured in this graph.
Source: CAPA – Centre for Aviation & OAG.

The upgauging of its three Bali-China routes less than a year after they were launched indicates the routes have been successful, and that Garuda is experiencing strong demand from China – particularly for Bali.

Indonesia reported a 19% growth in Chinese visitor arrivals in 2015, to 1.2 million. The inbound market from China has been growing at a similarly rapid rate in 2016, driven primarily by Bali, which has emerged as a popular tourist destination for Chinese residents.

Garuda is planning to launch scheduled services from Bali to Chengdu in early 2016. Bali-Chengdu has been one of several seasonal charter routes that Garuda has operated in 2016 in the Indonesia-China market (mainly from Bali).

Chengdu will be Garuda’s fourth destination in mainland China and first secondary Chinese city. However, Garuda is considering several potential secondary destinations in China – most of which it has already tested out with charters.

Pursuing further expansion in the Bali-China market is sensible, given the surging demand. However, Garuda needs to be careful not to be overly ambitious with its Bali-China capacity as it is a highly competitive market, with seasonal fluctuations in demand.

China Eastern, China Southern and Xiamen Airlines have also added capacity to Indonesia over the last year, while Chinese LCC Lucky Air has launched services to Bali. Chinese airlines have a competitive advantage as they have strong brands and distribution networks in China and can also easily adjust schedules to meet seasonal fluctuations. 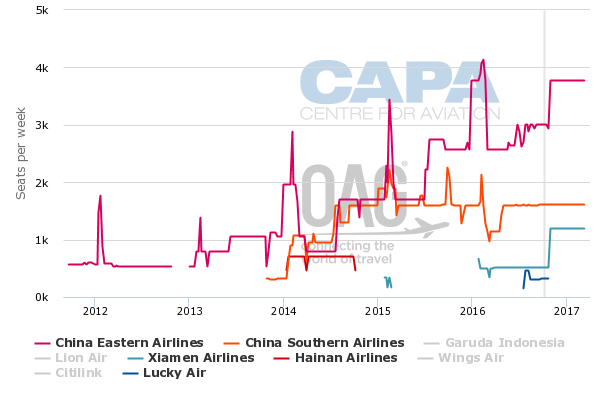 Other Indonesian airlines, including Lion Air, have also responded to rapid growth in the Bali-China market with new flights. So far most of these flights have been charters, but they are likely to be upgraded to scheduled services over the next year.

Total Bali-China capacity has doubled over the last year. There are opportunities for further growth, but there is also a risk of overcapacity.

As CAPA has previously highlighted, Garuda has particularly struggled in the London market since launching Heathrow services, with load factors below 50% in the initial months. Garuda views the London route – along with the more mature but still unprofitable Amsterdam service – as long term strategic investments. (Amsterdam was upgraded to nonstop, and from A330s to 777s, in 2014, when a stopover in Abu Dhabi was dropped.)

Garuda’s executive team is keen to continue with the strategic expansion of the long haul network, despite the losses that such expansion will bring, believing it needs to make such investments to improve its position over the long term. Garuda is therefore preparing to launch services to the US in 2017, and is also evaluating additional destinations in continental Europe.