A new air services agreement recently forged between Mexico and Indonesia opens up an opportunity for a codeshare between Aeromexico and Garuda, which in early 2014 will be joining the Mexican flag carrier in the SkyTeam alliance. The expected partnership should result in the first of many codeshares between carriers from Southeast Asia and Latin America.

Aeromexico is the only Latin American carrier serving Asia, where it sees opportunities for expansion using its new Boeing 787 fleet. But Aeromexico only serves North Asia and will need to rely on partnerships to serve Southeast Asia.

The new air services agreement between Indonesia and Mexico was signed during a 6-Oct-2013 visit to Indonesia by Mexican President Enrique Peña Nieto, who became the first Mexican president to visit Indonesia in 41 years. Mexico is keen to bolster ties with Southeast Asia, including trade and tourism. During President Nieto’s visit, Mexico and Indonesia signed MOUs on tourism to promote air connectivity and remove travel barriers.

Indonesian government officials stated after the signing of the new air services agreement with Mexico that Garuda and Aeromexico will serve the Indonesia-Mexico market via Tokyo. Garuda CEO Emirsyah Satar reportedly confirmed that the two airlines have been in codeshare talks and aim to begin the codeshare as soon as possible although a start date has not yet been decided.

Aeromexico and Garuda have two destinations in common – Tokyo Narita and Shanghai Pudong. The two carriers could potentially transfer passengers at both airports. But Narita is more appealing as Aeromexico has more flights from Narita and operates non-stop from Narita with non-stops from Mexico City likely to start in 2014. Shanghai has fewer flights and is served via Tijuana in both directions. Narita also is generally better equipped to handle transit passengers.

Aeromexico currently serves Narita with three weekly 767-200 flights which stop in Tijuana on the outbound sector and return to Mexico City non-stop. The carrier is planning to add more frequencies and eventually eliminate the Tijuana stop as it transitions its Narita service to 787-8s.

Aeromexico’s five 767s and four 777s are unable to operate from Mexico City to Asia non-stop due to Mexico City’s high altitude. The carrier’s initial batch of three 787-8s, which will be delivered by the end of 2013, are also expected to be unable to make the flight non-stop as these aircraft have some performance limitations. But Aeromexico previously stated that it expects its six additional 787-8s, which will be delivered in 2014 and 2015, to have the capability to serve Narita non-stop and possibly other Asian destinations.

Aeromexico took its first of nine 787-8s in Aug-2013 and also has six 787-9s on order. It now is now using the 787-8 on domestic flights and plans to begin 787-8 operations to Tokyo Narita from 14-Oct-2013. A fourth weekly frequency to Tokyo is slated to be added in Apr-2014, at which point Garuda should in SkyTeam and codesharing with Aeromexico. (For now Aeromexico continues to include in its schedules a stop in Tijuana on the outbound leg from Mexico City.)

Adding Garuda and potentially other Asian carriers as partners should help Aeromexico improve its load factor on the Tokyo route and sell the forthcoming influx of additional seats.

Working with the alliance’s Chinese members – China Southern, China Eastern and Xiamen Airlines – is more suitable at Shanghai Pudong given the domestic connection opportunities at Shanghai. Aeromexico does not yet codeshare with any Chinese carrier despite serving Shanghai, which is China Eastern’s largest hub.

Aeromexico currently serves Shanghai with two weekly 777-200ER flights that stop in Tijuana in both directions. The carrier has previously stated that it plans to start operating 787s to Shanghai in 2014.

Aeromexico and Garuda have complementary operations at Narita

Garuda currently serves Narita with daily flights from both Jakarta and Bali, both of which are to be included in the planned codeshare with Aeromexico. Both flights land at Narita at about 09:00 and depart at 11:00 or 12:00 noon. Aeromexico’s Narita flight lands at 06:45 and departs at 13:25. As a result the two carriers will be able to transfer passengers with relatively reasonable connection times (four to five hours) in each direction.

Aeromexico could also benefit from partnerships with Vietnam Airlines and CAL

Both carriers would be better positioned competitively by pursuing multiple partners in each region.

Vietnam Airlines, for example, would give Aeromexico direct access to Ho Chi Minh and Hanoi via Tokyo as well as multiple stop access to several Southeast Asian destinations not served by Garuda in Cambodia, Laos, Myanmar and the Philippines. Vietnam Airlines and Garuda have highly complementary networks which should benefit all SkyTeam carriers from outside Asia which are keen to improve their access to Southeast Asia.

While based in a North Asian country, China Airlines (CAL) could also provide connections to some Southeast Asian destinations, particularly the Philippines. Both CAL and Vietnam Airlines have flights to and from Narita which would provide relatively quick connections with Aeromexico. CAL serves Narita from Taipei and Kaohsiung while Vietnam Airlines serves Narita from both Ho Chi Minh and Hanoi.

Garuda could benefit from partnerships with Aerolineas and Delta

Garuda could link up with SkyTeam’s other Latin American member, Aerolineas Argentinas, in Sydney. Aerolineas currently serves Sydney non-stop from Buenos Aires with three weekly flights which will be upgraded to four weekly frequencies in Nov-2013. Garuda serves Sydney daily from Bali and five times per week from Jakarta with plans to go daily in 2014. But the two carriers would only be able to offer same day connections in one direction unless one was willing to re-schedule their flights or if Garuda added a second frequency.

Aerolineas and Aeromexico have complementary networks, with Aerolineas providing potentially better access to destinations within South America’s Southern Cone, including Argentina, Brazil, Chile, Paraguay and Uruguay. Aerolineas has already been working on implementing a codeshare with China Southern via Sydney. China Southern has two daily flights from its Guangzhou hub to Sydney, making it easier for connections with Aerolineas.

Garuda is also keen to work with Delta Air Lines, which links Narita with eight destinations in mainland US. Access to additional points in the US as well as destinations in the Caribbean and Latin America would be available via Delta’s US hubs. But the codeshare could initially only be one-way because currently Delta is unable to place its code on Garuda-operated flights due to Indonesia’s category 2 safety rating from the US FAA. Until Indonesian authorities comply with category 1 standards, Delta, which does not serve Indonesia, will have to rely on a strong interline agreement with Garuda.

Garuda’s Narita flights currently do not connect well with Delta’s US flights to and from Narita. But as Garuda adds partnerships with SkyTeam members it could potentially support a second daily flight from Jakarta to Narita, particularly if it uses A330-200s. Garuda recently introduced 777-300ER service to Narita but this is seen as a temporary measure until it begins non-stop flights to Europe in 2014.

While SkyTeam does not have a Japanese member, it has a strong presence in Narita, accounting for 24% of total international capacity. As it prepares to enter SkyTeam Garuda should be able to leverage the SkyTeam network at Narita and use the airport as its main transit point for destinations throughout the Americas. 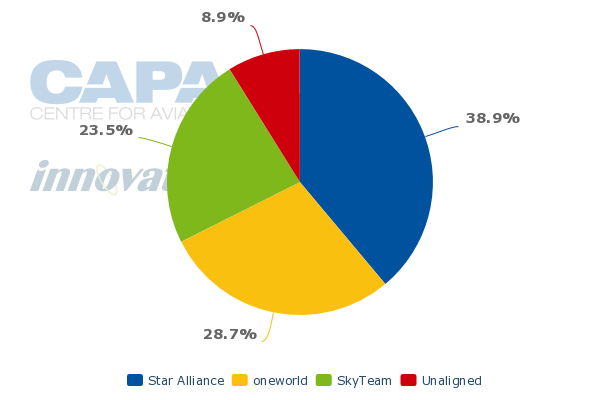 In addition to his visit to Indonesia along with Mexican president Nieto, Mexico tourism secretary Ruiz Massieu stopped in Singapore, where he signed agreements with Singapore tourism authorities and visited with Singapore Airlines (SIA) CEO Goh Choon Phong. As it is with Indonesia, Mexico is keen to promote better connectivity with Singapore.

SIA is currently the only Southeast Asian carrier serving Latin America, operating a one-stop service three times per week to Sao Paulo via Barcelona. SIA has had this distinction since Malaysia Airlines dropped Buenos Aires, which was served from Kuala Lumpur via Cape Town in South Africa, in early 2012.

SIA does not currently codeshare with any Latin American carrier. A relationship with Aeromexico would be slightly unusual but feasible as SIA has several partners outside Star while Aeromexico has partners outside SkyTeam. SIA could also potentially partner with Star members Avianca via Barcelona and Copa via Los Angeles and New York.

Connectivity to Latin America is becoming increasingly important for Asian carriers given the rapid growth in the Asia-Latin America market. Some Latin American carriers are also starting to look into alternatives for tapping the Asian market although generally not yet to the same extent as their Asian counterparts.

Turkish Airlines is also pursuing rapid expansion in Latin America and targeting connections from destinations in its Southeast Asian network. Turkish currently only serves Buenos Aires and Sao Paulo but plans to add Bogota, Caracas, Havana and Mexico City in 2014.