Director General, Olivier Jankovec, commented, “the double-whammy  of falling aviation and commercial revenues is hitting Europe’s airports more and more severely with each passing month. On top of that, the capital-intensive nature of airports means that we are also being squeezed by the ongoing paralysis in capital markets". He added the “unjustifiable” proposal to suspend the use-it-or-lose-it rule on airport slots will “only make matters worse for congested hubs and regional airports alike”. Mr Jankovec concluded, “this is nothing more than airports being forced to subsidise airlines for not flying”.

European airport stocks had a mixed day, with Zurich and Fraport down 1.2% and 0.3%, respectively, while Vienna, Hochtief and Ferrovial gained 0.8%, 2.5% and 4.9%, respectively. 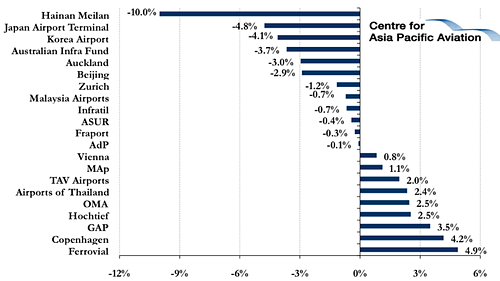