Frontier Airlines began 2016 making meaningful strides in its on-time performance, besting its closest US ULCC rival Spirit Airlines. But its performance in the busy summer months of Jun-2016 and Jul-2016 slipped, due largely to challenges in ground handling. Now Frontier faces the task of restoring its OTP to consistently higher levels.

Frontier’s network composition is slightly different from those of the two other US ULCCs, Allegiant and Spirit. Its average weekly frequencies fall between those offered by its ULCC counterparts and, in some ways, Frontier’s network changes seem more rapid than those of other ultra-low cost airlines as it works to tailor the ULCC model to its specific strategy.

As a privately held company, Frontier does not discuss its growth prospects as freely as Allegiant and Spirit. But the airline has an ample pipeline of Airbus deliveries that will drive its growth over the medium to long term. During the past year the prospect of an IPO to fund Frontier’s growth has surfaced and quietened down; but at some point in the not-too-distant future the company’s investors will seek rewards for their endeavours.

Frontier's on-time performance falls after a strong start for 2016

During the past two to three years a challenge for the two largest ULCCs in the US – Frontier and Spirit – has been delivering a consistently favourable operational performance. Data from the US Department of Transportation (DoT) show that for the 12M ending Dec-2015 Frontier’s percentage of flights arriving on time was 73.2% and its ranking among airlines tracked by the agency was 12 of 13.

During that same time Spirit recorded a 69% on-time performance and it was ranked 13.

During the first five months of 2016 Frontier posted a marked performance in its on-time performance, with an average of 83%, and a ranking of fourth in three of five of those months.

Spirit’s average on-time performance during the same time period was 69%, and its ranking in each month was 12th. (During 2016 there were only 12 airlines tracked by DoT, versus 13 in 2015.)

Beginning in Jun-2016 Frontier’s performance began to slip, dropping to 75.6%, and falling deeper in Jul-2016 to 63.3%. The news outlet The Denver Post has reported that Frontier cited problems with its ground handler at its Denver base, Swissport, which has been replaced by Simplicity USA. Frontier told the news outlet that problems with Swissport began in May-2016, which affected the company’s on-time performance for arrivals and departures for the busy summer season. 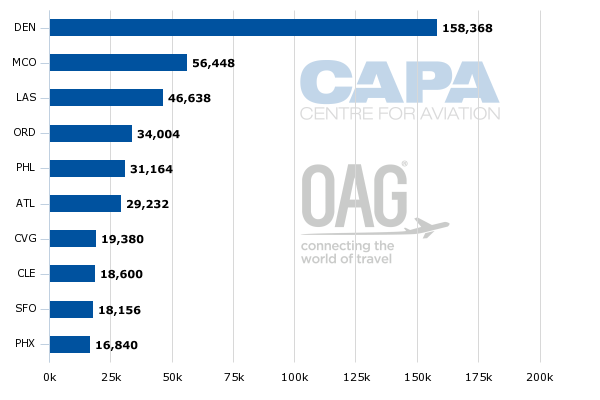 Obviously Frontier’s goal is to restore the on-time performance it enjoyed during the first five months of 2016, which was well above 80%. However, its ULCC rival Spirit has a different mindset in setting its on-time arrival targets.

Although Spirit was still in the lower tier of airline on-time rankings for the busy summer season of Jun-2016 and Jul-2016, the company has declared its performance in that period was a record. Its stated goal is an on-time performance in the mid-70s.

Spirit’s on-time aspirations are markedly lower than most of its US peers, and the lower targets are driven by its goal of keeping costs in check. Its unit costs excluding fuel and special times fell 5.6% year-on-year during 1H2016, to USD5.6 cents.

Executives at Spirit have explained that some US airlines are using a standard block time of 75% to 80%, and “it’s just simply paying more money to show a good performance without turning the airplanes any faster”, Company CEO Robert Fornaro recently stated. For many years Spirit operated at a 55% block target and it has now risen to 65%, with a goal of 68% to 70%. Spirit’s chief executive explained, “going to 80% to produce five or six points with no real performance improvement, we think, is a waste of money”.

Frontier’s on-time targets appear to be higher than Spirit's, and Frontier seems to have concluded that it can keep its unit costs excluding fuel below the ULCC benchmark of USD6 cents while delivering a better on-time performance rate.

Frontier’s network strategy during the past few years has been more freewheeling than at its ULCC counterparts. It has made a push from smaller markets such as Colorado Springs, Trenton and New Jersey. Frontier is returning to Colorado Springs in 2016 after establishing a short-lived base at the airport in 2013.

The return to Colorado Springs in 2016 is part of a dizzying network blitz that Frontier has engaged in, entailing the launch of 42 new routes between Apr-2016 and Jun-2016.

At the same time Frontier is cutting several routes from Atlanta, including Cleveland, Cincinnati, Houston Intercontinental, Pittsburgh, Austin, San Antonio, Cincinnati, Kansas City, Indianapolis, St Louis, Raleigh-Durham, Milwaukee and Memphis. Many of the cuts are seasonal, and Frontier is determining which routes will return in 2017.

One pattern that has emerged in Frontier’s network composition is that its average number of frequencies falls between the low-frequency pattern of Allegiant and the higher-frequency model of Spirit.

Data from CAPA and OAG show that frequency on Frontier’s routes falls into three or four weekly flight patterns. 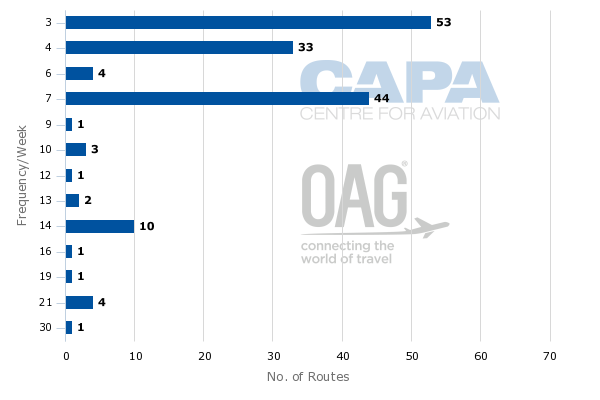 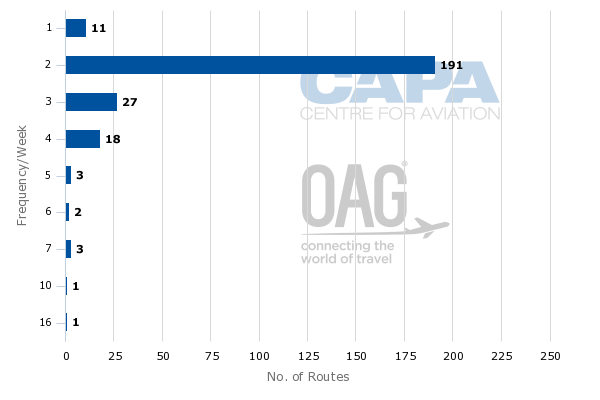 Spirit, on the other hand, offers daily service on 80 of its routes. 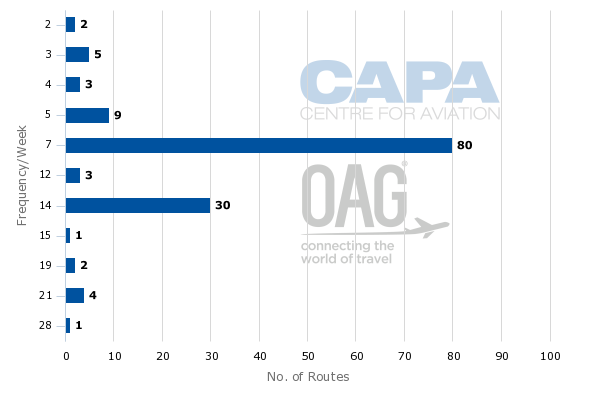 Both Frontier and Spirit have the same broad philosophy of inserting enough service into a market to stimulate cost-conscious travellers, and obviously Frontier has concluded that less than daily service in the bulk of its markets is a more viable strategy than daily service.

Frontier’s ASKs grew 20% from 2014 to 2015 and are forecast to increase 19% from 2015 to 2016. Spirit has stated that its growth rate would average 15% to 20% for the next few years, and Frontier is likely to keep its capacity growth in that same range for the foreseeable future. 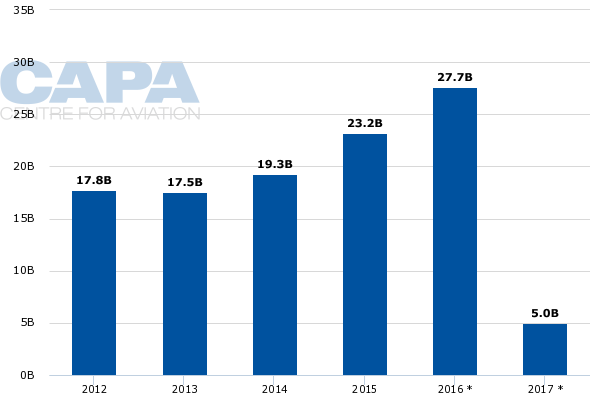 Frontier has 89 Airbus aircraft on order, and has a steady stream of deliveries scheduled from 2019 to 2013. Some of those aircraft are for replacement, but Frontier’s ambitions are obviously to expand its ULCC footprint in the US.

Source: CAPA Fleet Database
Orders include those placed directly by the operator and by lessors assigned to the operator, from 28-Sep-2016 onwards.

Frontier Airlines projected delivery dates for aircraft from OEMs, and leased from lessors as of 28-Sep-2016 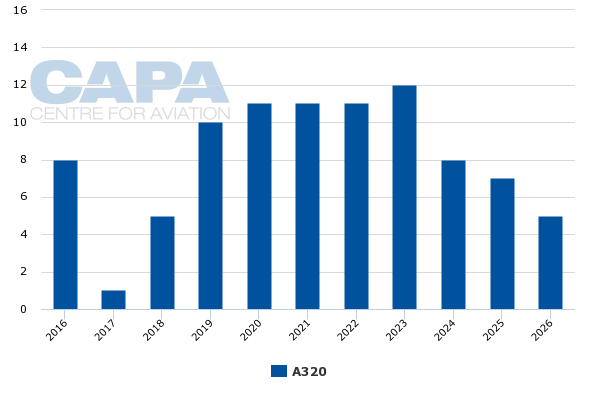 Source: CAPA Fleet Database
Aircraft operated by subsidiaries/associates of the main airline may be listed separately.
Firm orders include those placed directly by the operator and by lessors assigned to the operator, from 26-Sep-2016 onwards.
Excludes aircraft for which the delivery date has not been announced, cannot be reasonably projected or is unlikely to be delivered.

Frontier, Spirit, and to a lesser extent Allegiant are facing shifting dynamics in the US domestic market as the large global network airlines – American, Delta and United – work to create segmented fares to target the cost-conscious customer who serves as the core passenger base for the ULCCs.

As those airlines take specific steps to address the ULCC threat, ULCCs need to ensure they remain competitive on price, keep their costs below the USD6 cent benchmark, and just as importantly – deliver a consistently reliable on-time performance.

Earlier in 2016 Frontier hinted that it could participate in an initial public offering in the not-too-distant future, and every once in a while speculation surfaces that the company is considering accessing the public markets.

The timing of a Frontier IPO depends on the type of reception the airline would receive in the public markets.

Spirit has faced pressure on its valuation during the past year as it had battled the same tough revenue environment that has challenged all US airlines.

Frontier has likely faced the same lack of pricing traction, and it may be waiting until 2017 for the start of pricing rebound before it makes a public debut. Its current investors may receive better returns by sitting out on an IPO in 2016.