With its transition to an ultra low cost airline essentially complete, Frontier Airlines continues to undergo network changes to maximise its ULCC business model. In the latest round of flights starting in late 2015 and continuing early into 2016, Frontier is stepping up competition with familiar foes, namely American Airlines and Southwest Airlines. American in particular has faced deep discounting in its markets during 2015 from Southwest and other ULCCs, which has been one main factor in the Fort Worth-based airline’s sagging unit revenues.

Among the network changes for Frontier is the pruning of some service from Cincinnati, a market that seemed ripe for the airline’s business model. But it appears Frontier is opting to focus much of its new network offerings in leisure markets with a push from Fort Myers, Florida and Las Vegas.

Frontier also recently marked a milestone with the delivery of its first larger gauge Airbus A321 featuring a high density configuration of 230 seats. As it continues to fine-tune its network and product offerings, Frontier finds itself in a US domestic environment where unit revenue and yields are falling, yet profits are reaching record highs.

Frontier’s latest raft of new flights starting in late 2015 and continuing to early 2016 are largely to leisure markets, with some larger routes such as Denver to Charlotte and Philadelphia mixed in. Among the new additions are five routes from Southwest Florida International airport in Fort Myers, four from Orlando International and three from Las Vegas. Frontier is also taking aim at American with service from Denver to American’s hubs in Charlotte and Philadelphia.

Generally ULCCs only offer enough service on route pairing to stimulate traffic to cover their flights, and Frontier’s seat share on the new routes reflects that strategy. Its largest shares are 31% each from Southwest Florida to St Louis and Philadelphia to Southwest Florida.

Source: CAPA - Centre for Aviation and OAG
Note: Seats are approximate, one way

Frontier cuts some routes from Cincinnati, a poster child for ULCC expansion

As Frontier adds a solid number of new flights in 2015 and 2016, it is cutting some service from Cincinnati, a market that has seen a drastic number of flight reductions after consolidation among US major airlines.

Cincinnati seems like the model market for ULCC expansion. It is dominated by one airline, and has fares that are consistently among the highest in the US.

Frontier made a push from Cincinnati in the 2013-2014 time period, and data from CAPA and OAG for the week of 26-Oct-2015 to 1-Nov-2015 show that it offers flights to Orlando, Dallas/Fort Worth, Denver, Las Vegas and Southwest Florida.

Allegiant Air has also been building up Cincinnati, and has concluded that its expansion in the market is the fastest in the company’s history. Presently, (19-Oct-2015 to 25-Oct-2015) Frontier represents 10% of the airports seats and Allegiant 7%. 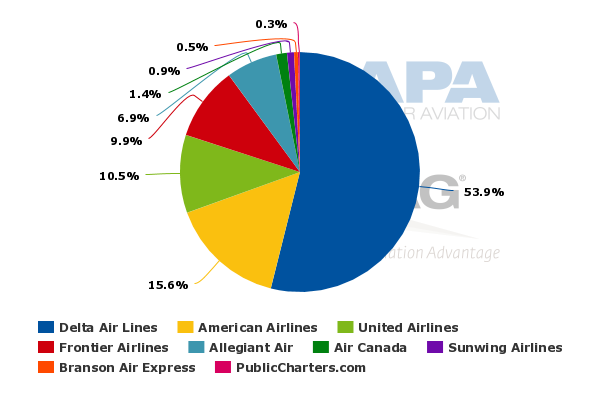 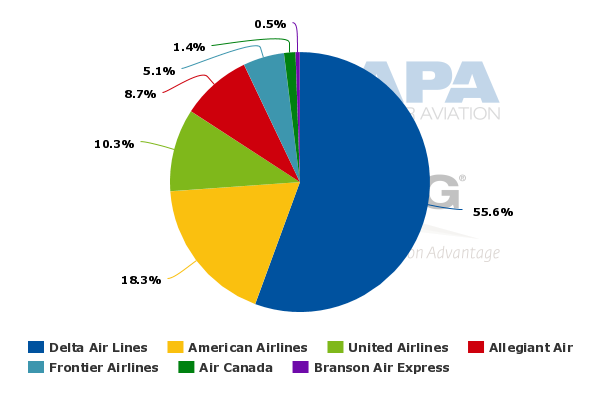 In theory, it seems that Frontier could easily compete in the markets it has shed from Cincinnati, but ULCCs often tout their ability to quickly redeploy assets, so perhaps Frontier has identified other markets that could perform better than some of its routes from Cincinnati, which remains dominated by Delta.

The new competition from Frontier for American continues a trend that American has cited throughout 2015 of pressure from low cost airlines. American has stated that it is matching the fares of discounters, and also has concluded that fare pressure by those airlines is a major factor in its passenger unit revenue decline, which was 4.4% for 1H2015.

Lower fuel prices are allowing the large US major airlines to match fares for what they deem as marginal capacity, which is also putting pressure on Spirit Airlines’ unit revenues. Presumably, Spirit still needs to offer fares below the US majors, so the pricing actions by the larger airlines have a cascading effect. Spirit posted a 12.5% decline in unit revenue during 1H2015, and in Oct-2015 declared: “Prices in the markets we serve are low, and we don’t expect that to change in the foreseeable future.”

Frontier, which is controlled by Indigo Partners, is no doubt experiencing the same pressure on passenger unit revenues. Although Spirit’s unit revenue decline is deeper than the rest of the US industry, it recently updated its operating margin guidance for 3Q2015 from 22% to 25% to 27%, driven by lower costs.

Privately held Frontier does not publicly release its financial data; but the airline has previously stated that it was profitable in 2015. News outlet The Denver Post recently quoted the airline’s flight attendants union, which highlighted that Frontier is the world’s fifth most profitable airline. Frontier president Barry Biffle told local Denver news outlet 9News that Frontier was completely restructured, having removed one quarter of its costs.

Part of Frontier’s strategy to lower its costs is densifying its aircraft. It is growing seat counts on its A319s from 138 to 158 and increasing seat numbers on its A320s from 160 to 180. Frontier recently took delivery of its first A321, which features 230 seats.

Source: CAPA Fleet Database
Orders include those placed directly by the operator and by lessors assigned to the operator, from 23-Oct-2015 onwards.

After the reconfigurations, Frontier’s Airbus narrowbodies will feature more seats than the Airbus single aisle jets flown by ULCC rival Spirit Airlines. Its A319s are configured with 145 seats and its A320s feature 178 seats. Spirit’s A321s are flown in a 218 seat configuration.

The added seats should help Frontier achieve the unit costs enjoyed by its main rival Spirit; however, Spirit seems to be moving the goal posts on unit cost performance. Its unit costs excluding fuel for 1H2015 fell 4.2% to USD5.76 cents, and the company’s projected unit costs for 3Q2015 are USD5.38 cents to USD5.42 cents.

Frontier develops a product offering to perhaps distinguish itself from Spirit

Part of the ULCC model is charging a low base fare and then selling add-ons such as checked and carry-on luggage, food and drinks and seat assignments.

Frontier has opted to package its add-on fees into a product called “The Works” that bundles those items together for sale outside of its base fare. The airline stated that the bundle, which includes priority boarding, one checked and one carry-on bag, seat selection, refundability; and no change fees, is 60% cheaper than buying the offerings separately.

It is a useful concept to bundle the add-ons for sale, and something rival Spirit has not done extensively. Perhaps Frontier is attempting to distinguish itself from Spirit in the ULCC space, but the overall ULCC model continues to drive negative consumer sentiment.

The US DoT Air Travel Consumer Report shows that Frontier and Spirit were the airlines that drew the largest amount of complaints per enplanement for Aug-2015 (the latest data available). Frontier’s complaint level per passenger 100,000 passenger enplanements was 8.69 (up from 4.87 the year prior), and Spirit’s score was 15.42. International experience suggests however that this is not always a determinant of success: for years Europe's Ryanair distinguished itself in this way and has become the region's most consistently profitable airline.

The next couple of years should be interesting for Frontier, and the ULCC space in the US

A tumultuous time for Frontier ended with the purchase of the airline in 2014 by ULCC specialist Indigo.

The transition to a ULCC business model allows Frontier to have some distinction after attempting several network strategies during the last few years that fizzled out.

Frontier still has a lot to prove operationally, and to customers, which are generally cool to the underlying strategy of ultra low cost airlines. But for now it is taking the ULCC playbook and making small nuanced changes. The next couple of years should provide clarity about the sustainability of two larger ULCCs in the US market, and if Indigo’s turnaround of Frontier is successful.