From Cincinnati to Memphis: high fares and diminished service for smaller US hubs

In our analysis of airports across the US over the past year, we have observed the decline of three previous hubs – Cincinnati, Pittsburgh and St Louis – and the dramatic changes that have accompanied their loss of status. Given its precarious location amidst other Delta Air Lines hubs, we speculated that Memphis could meet a similar fate. Delta this week announced that it will introduce further cutbacks from 04-Jan-2012 when it plans to drop seven more destinations and 15 flights. In this group is Seattle, leaving only Los Angeles with non-stop service on the west coast. Mainline Delta service is an ever-more endangered species.

Indeed, with so few connections available, the ability of the airport to claim 'hub' status is increasingly suspect. But as we have seen at Cincinnati, which suffered a similar fate, Delta continues to use that designation long after hub viability has disappeared.

Being a 'hub in name only' has a downside

But the ongoing hub title has carried with it an additional burden for Cincinnati, which is likely for Memphis as well: very high fares. At Pittsburgh and St Louis, the former incumbent carriers, US Airways and American, dropped both cities from their list of hubs and both have attracted Southwest. In the case of St Louis, Southwest is by far the dominant airline, having built a network that well-serves the population. To a lesser degree, the same is true at Pittsburgh.

And while Pittsburgh and St Louis have lost hub status, they have also seen fares drop so that they are more closely aligned with the national average (in grey in the below chart). Though losing a huge chunk of capacity with the exit of US Airways, travellers at Pittsburgh have seen fares drop considerably. No such benefit has come to those going to or from Cincinnati. 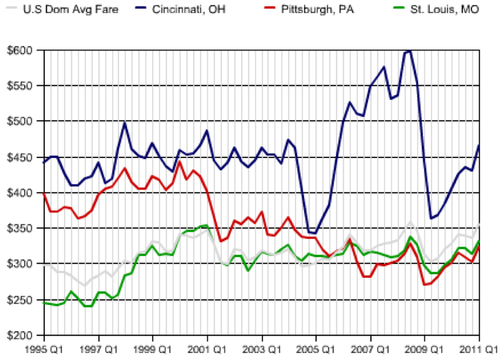 Delta continues to operate unchallenged at Cincinnati and, but for some minimal service by AirTran, enjoys the same situation at Memphis. Looking first at Cincinnati, Delta extracts a significant premium for its non-stop flights, most of which go to its other hubs. And without the presence of a LCC, the competition is happy to charge fares lower than Delta for connections, but still high compared with many markets. 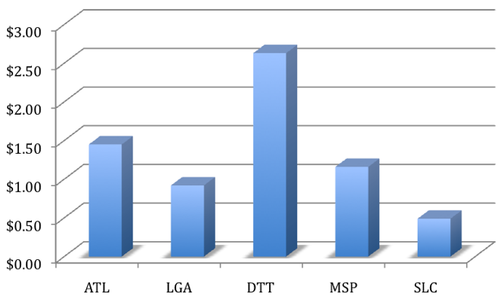 The yield between Cincinnati and Detroit, a distance of only 231 miles, is a whopping USD2.53 per mile. Add to that the fact that Delta leads the legacy carriers in ancillary fee collections and you end up with a very costly trip. Furthermore, though a connection might save money, given the short distance it adds considerably to the distance travelled and the time enroute.

Memphis is trending in the same direction

Things are a little better at Memphis, but given the dominance of Delta, there are few alternatives and, like Cincinnati-Detroit, lower cost options involve much longer travel times. To St Louis, the non-stop takes just over an hour but costs USD657 (USD2.68 per mile). The fare drops to USD425 with a connection but the travel time more than doubles. 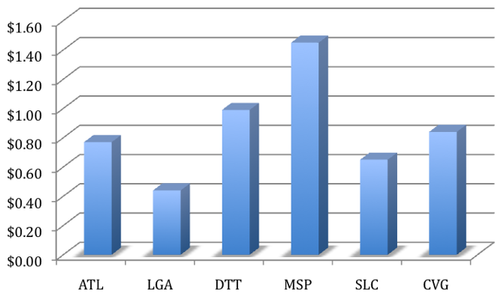 This differential is born out by data gathered by the US Bureau of Transportation Statistics and the following graph. Not only are the Delta intra-network routes fares higher, but the trend also is evident across the board to all destinations. 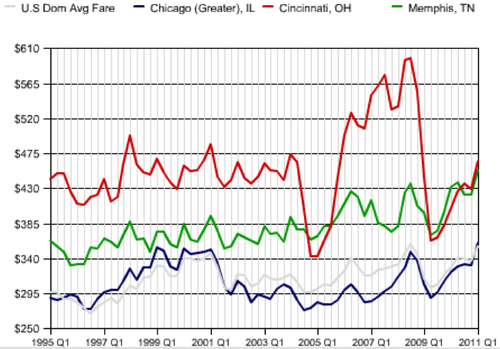 The grey line again traces the national average, which compares favorably with Chicago’s more competitive fares. Cincinnati, always high, became even more expensive as the hub was drawn down and after a sharp drop, fares are again on the rise. Memphis is showing a similar trend.

Memphis has some advantages absent in Cincinnati. Fares to Atlanta are lower due to AirTran’s presence and to New York because there is more competition than is evident at Cincinnati. And while the yield to Detroit is less, a round-trip ticket will still remove USD624 from your wallet, plus fees of course. For USD77 less, USD547, you can buy a Southwest ticket to fly you non-stop coast-to-coast, Los Angeles to Baltimore on the same dates.

Finally, what about the cost between Los Angeles and Delta hubs on those dates?

Once again the story has a less happy outcome for those in Delta fortress hubs. Those living in Memphis pay the most, USD807. To San Francisco, a city with no non-stop service from Memphis and roughly the same mileage, the highest one-stop fare for the chosen dates was USD545.

Those flying Delta between New York and Los Angeles benefit from the rather cut-throat competition and pay but USD319. To Atlanta, the fare is held in check by AirTran. 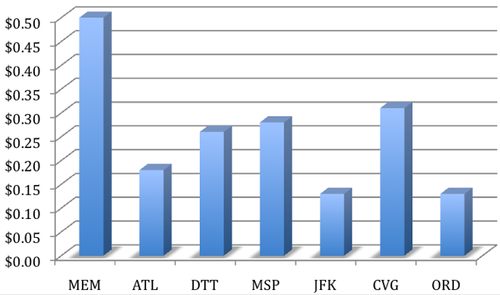 The last column, between Chicago and Los Angeles, is not a Delta route, nor is it one on which they compete very well, given their network. However, it is a route with fierce competition, including Southwest and Virgin America. Compare the yield on that sector to the yields from Minneapolis, Cincinnati and Detroit, where Delta is the dominant non-stop player.

Going to Memphis? Open your wallet...

So, for those who live in – or travel to – Memphis, unless Southwest significantly upgrades the former AirTran routes, there is a hint as to your future by looking at the high fares and reduced schedule that have become the norm in Cincinnati. Plus, the predominance of RJ aircraft means frequent travellers have far fewer upgrade possibilities as most aircraft are y-class only. But then again, from Memphis you could always ship yourself on FedEx instead.