The bitter Northern Hemisphere winter conditions are providing more than just operational hassles for airlines, as resurgent oil demand has pushed prices firmly back above USD80 per barrel in the first week of trading in 2010, taking jet fuel prices up with it.

Fuel prices are now more than double where they were 12 months ago, and the spike in oil is an ominous sign for the industry, particularly the LCC sector.

Globally, traffic saw the first signs of resurrection in late 2009, although this is only in comparison to the depressed levels seen at the end of 2008. European air traffic control body, EUROCONTROL, noted in late Dec-2009 that traffic in Europe had been reset to 2005 levels.

Better demand levels and slowly returning yields have prompted more confidence in airline pricing decisions to offset the rising jet fuel prices, which have been climbing resolutely since mid-Dec-2009. Some US full service carriers increased fares after Christmas by up to USD6 per sector, although LCCs such as Southwest, JetBlue and AirTran have not followed the move.

Oil demand is expected to increase in 2010. The International Energy Agency (IEA) marginally upgraded its global oil demand estimates for 2010, raising its estimates from 86.2 to 86.3 million barrels per day. In Dec-2009, the US Energy Information Agency (EIA) forecast revenue from OPEC oil sales would approach USD759 billion in 2010, some 32% higher than in 2008.

IATA’s most recent forecast for 2010 oil prices is USD75 per barrel, which would cost the airline industry approximately USD123 billion. 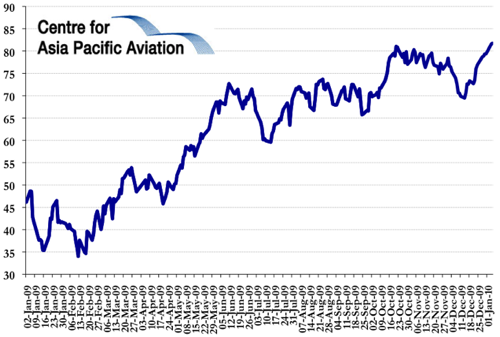 Jet fuel climbed across the major markets. The largest gain was seen at Singapore, with prices up 6.9% to USD2.16 per gallon. Los Angeles prices fell 3.8%, staying above USD2.00 per barrel. Strong climbs were also resisted at the Amsterdam-Rotterdam-Antwerp exchange (+5.9%) and the US Gulf Cost (+5.4%). New York Harbour and Los Angeles both rose 4.4%, to settle above USD2.21 per barrel. 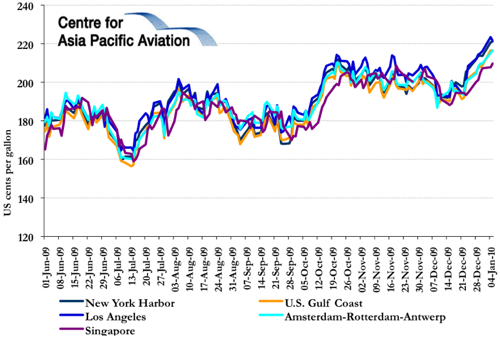