Airline CEOs are also participating in panel discussions on LCCs, tourism, airports, connectivity, Africa and the region’s overall outlook. The outlook panel is the first of eight enlightening panel discussions that will take place over the two days and includes Gulf Air CEO Krešimir Kučko.

The CAPA Middle East and Africa Aviation Summit will be held in Dubai on 29/30-Apr-2019. Click here to learn more about the Summit.

Flydubai has become a network airline

The CAPA Middle East and Africa Aviation Summit comes at a timely juncture for flydubai as the airline is about to celebrate its 10th anniversary. Over the years flydubai has drifted away from the LCC model and adopted a network hybrid model.

As CAPA pointed out in a 15-Apr-2019 report on the Middle East and Africa LCC sector, flydubai now relies heavily on network traffic, feeding its sister airline Emirates and offering a business class product (even providing lie-flat seats on some aircraft). Connectivity involving LCCs and hybrid airlines will be the subject of a panel discussion at the CAPA summit on 30-Apr-2019.

In a Q&A with CAPA in the lead-up to the summit, Mr Ghaith said that over 3 million flydubai passengers had connected to Emirates in 2018. “Our partnership with Emirates, which goes beyond the codesharing announced in 2017, has enabled us to optimise our schedule and network”, he said. “We have already seen 3.29 million passengers fly with both airlines during the course of 2018 benefitting from increased connectivity.”

Flydubai to flydubai connections have become common as its network now stretches from Italy in the west to Nepal in the east and Tanzania in the south. A staggering 20% of flydubai’s flights are now at least five hours (based on OAG schedules for the week commencing 22-Apr-2019). This figure would be even higher if it had not been for the grounding of its fleet of 11 737 MAX 8s. 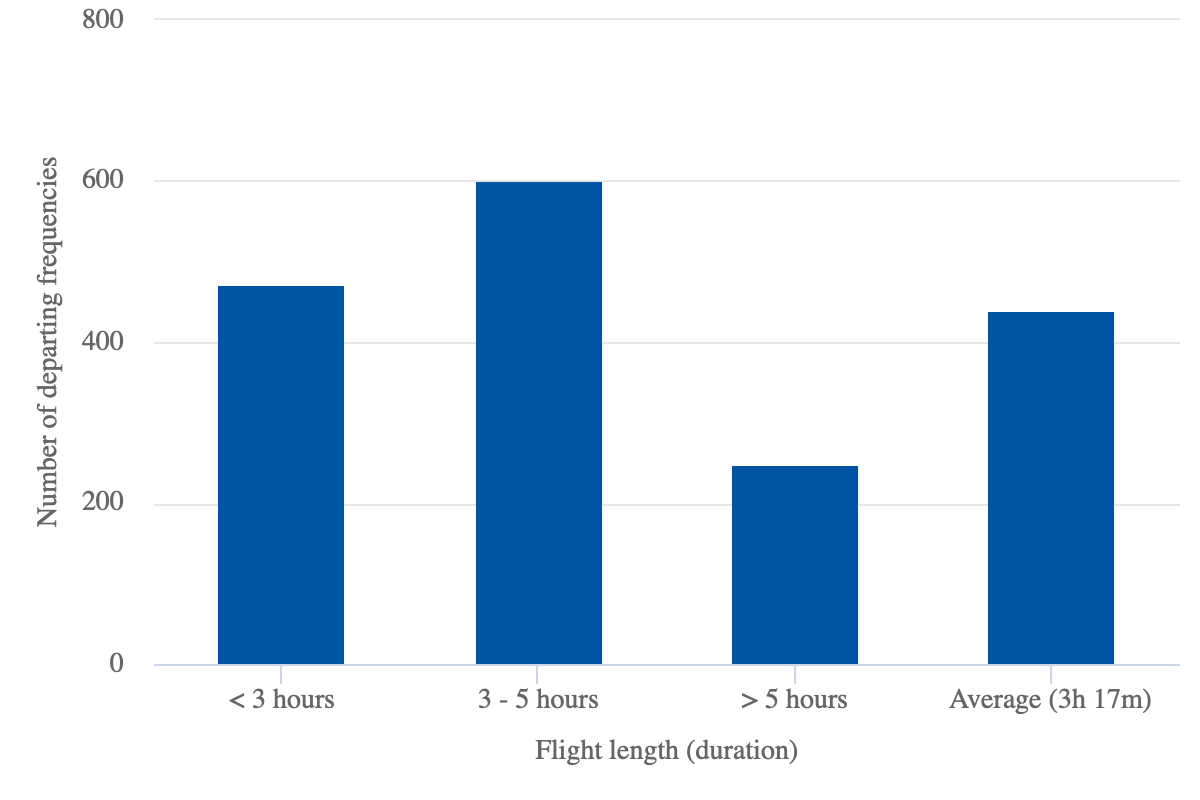 Flydubai has grown rapidly over the past several years as it has extended its network in Europe, Asia and Africa, launching several destinations that could not be sustained without connecting traffic.

Flydubai passenger numbers have more than doubled since 2012. However, growth has slowed in the past two years – as growth at its big sister Emirates has also slowed. 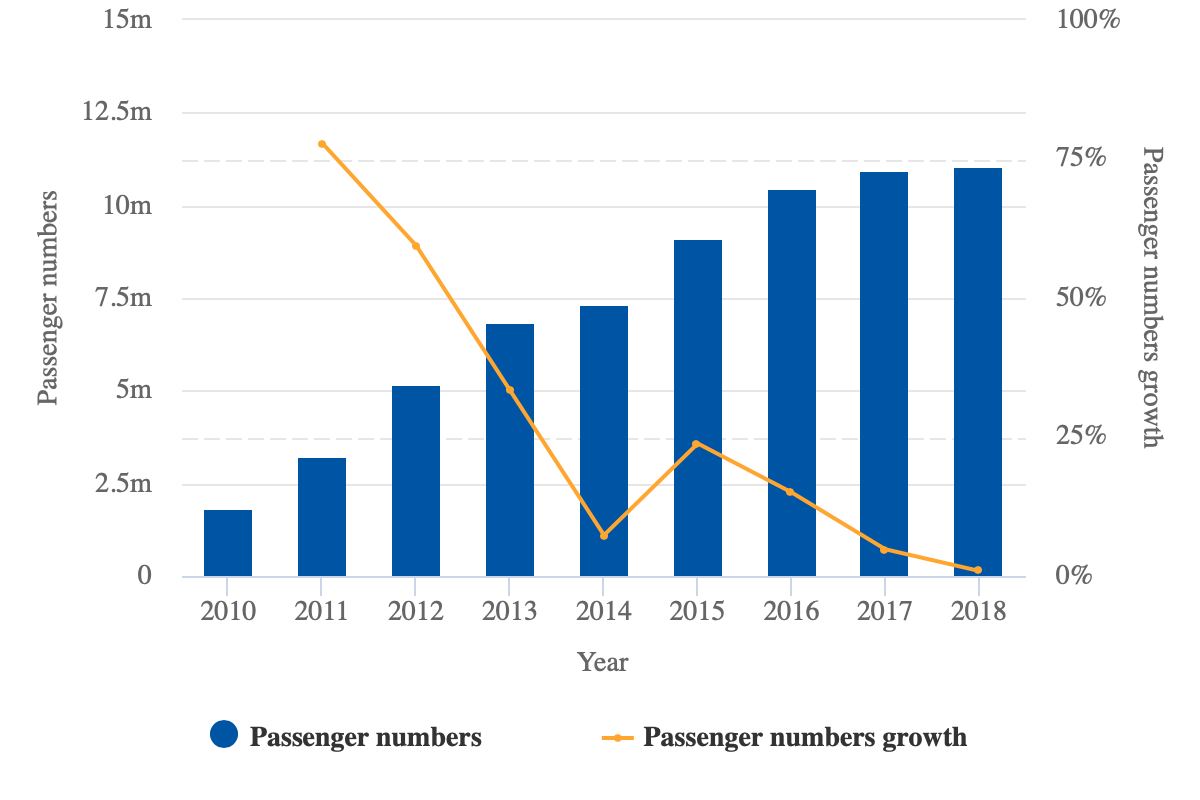 Flydubai’s seat capacity in 2019 has been tracking below 2018 levels all year (even before the MAX grounding and runway closure) and is currently lower by nearly 30%, based on CAPA and OAG data for the week commencing 22-Apr-2019 compared to 23-Apr-2018. Capacity will increase in 3Q2019 – to slightly more than 300,000 weekly seats compared to approximately 230,000 weekly seats currently – but this is still below 3Q2018 levels.

Commenting on the industry outlook for 2019 Mr Ghaith stated: “The volatility in fuel prices coupled with global geo-political developments and its effect on demand for international air travel will likely continue to affect the industry in the near to medium term. We continue to focus on enhancing the efficiency programmes we put in place last year.”

As CAPA stated in the 15-Apr-2019 analysis report, Mr Ghaith has led flydubai since the airline’s pre-launch phase.

Flydubai launched in 2009, becoming the second LCC in the UAE after Air Arabia – which launched six years earlier in 2003. However, flydubai has overtaken Air Arabia based on fleet and network size.

Mr Ghaith started his career at Emirates in 1986, working his way from a management trainee position. He was Emirates’ EVP for commercial operations before moving over to flydubai in 2018, when the Dubai Government decided to launch a new narrowbody airline to supplement all-widebody Emirates.

Flydubai is celebrating its 10th anniversary on 1-Jun-2019. Its achievements in the first 10 years will be a topic to be discussed during the fireside chat with Mr Ghaith that opens the second day of the CAPA Middle East Africa Aviation Summit on 30-Apr-2019.

“As we are celebrating our 10th anniversary this year, I would like to look back at some of our key achievements and acknowledge the hard work and efforts of our extremely committed and reliable team here at flydubai, without whom the growth and success of our airline wouldn’t have been possible”, Mr Ghaith stated when asked about his session at the CAPA summit.

“Since the launch of the airline in 2009 we have created a network of over 90 destinations in 47 countries, we opened up 71 previously underserved markets and we carried over 70 million people. Our young and efficient fleet has grown to over 50 Boeing 737 aircraft and we operate over 1700 flights per week.”

Mr Ghaith said that he is also looking forward to talking with industry peers during the network sessions at next week’s summit. “It is always good to catch up with old friends in the industry and meet new people. CAPA Summits are a great platform to share knowledge and best practice across our industry.”

In a separate Q&A Gulf Air’s Mr Kučko shared similar expectations for the upcoming summit: “CAPA is one of the great forums to exchange and discuss pertinent contemporary issues and trends, offering countless opportunities to rub shoulders and network with peers and leaders in the industry. It’s a platform to learn and not simply to give advice.”

The new model features the relaunch of Gulf Air’s Falcon Gold premium product, which will be introduced as the airline renews its fleet with new 787s and A320neo family aircraft. (Falcon Gold aims to provide the luxury of a first class product at a business class fare.)

Adopting a boutique model is the latest step in Gulf Air’s ongoing transformation and restructuring. Mr Kučko has led Gulf Air since 2017, when he joined the Bahrain-based flag carrier after a stint at Croatia Airlines, where he also led a restructuring.

In the Q&A with CAPA in the lead-up to the CAPA Middle East and Africa Aviation Summit, Mr Kučko said that the boutique concept would result “in a unique premium service for our customer and at the same time proudly promoting the Kingdom of Bahrain”.

The changes at Gulf Air are aimed at improving the airline’s position in a challenging and increasingly competitive market.

Gulf Air’s capacity has been relatively flat over the past several years, according to CAPA and OAG data.

Gulf Air’s modest fleet currently consists of only 36 aircraft, up from 33 aircraft six years ago in Apr-2012 (according to the CAPA Fleet Database).

“The dynamics in the region are changing for airlines of all types, whether legacy or hybrid. We should see further rationalisation across the region and beyond in terms of network, fleet types and partnerships (at all levels). This is not driven simply by the increasing competition but the very fundamental to drive a sustainable and profitable airline”, Mr Kučko said.

“Likewise, the competitive (Indian/Chinese airlines), financial (oil price), operational (shortage of pilots), political (regional security/airspace) and regulatory (transport agreements issues with EU) challenges are ever present and airlines need to combine a clear strategy with nimbleness and flexibility to adjust where and when it is required. Challenges and competition in the airline industry will always remain – but this should not and will not dampen the opportunity, the innovation and satisfaction that this industry will brings to us as employees, our customers, being an economic engine for our local economies and connecting the region to the world.”

Mr Kučko cited growing competition from Indian LCCs and overcapacity, which continues to pressure yields, as some of the challenges confronting the airline and the industry in 2019.

“Customers have more travel options and more savvy, airlines must recognise, respect and respond accordingly or they will lose the customer”, he said. “Political uncertainties remain, which impacts access to certain markets and/or makes flying more expensive to circumvent restricted or unsafe airspace.”