Flycana: Dominican start-up LCC working to be viable in the Caribbean

Flycana, the Dominican Republic based start-up, is aiming to launch operations before the end of 2020 and has ambitions to grow its network quickly to encompass numerous destinations in the America and the Caribbean.

The airline envisages serving the visiting friends and relatives (VFR) market, with North American routes making up just under half of its network.

Flycana is working to secure the necessary start-up funding in the coming weeks, and although the company believes there is an opportunity for a low cost operator in the region, its management is also not blind to the challenges that a start-up airline in the Caribbean faces.

Flycana is working towards a launch by the end of 2020

Flycana acquired the aircraft operator's certificate of Dominican Wings two years ago and after a CEO change early in 2019, the airline has emerged with a network strategy and seems close to securing the necessary funding for launch.

Speaking to attendees at the recent Routes Americas 2020 conference in Indianapolis, Flycana CEO Fred Jacobsen explained that the company was in the process of securing USD80 million in funding from both local and international investors by Apr-2020. He remarked that Flycana would aim to launch as a low cost operator within six to eight months, once its funding is finalised.

The airline plans to inaugurate operations with seven aircraft, either current Airbus A320 models or Boeing 737 next generation jets, with the fleet growing to up to 32 aircraft by its fifth year of operations.

Flycana's network will comprise destinations in the Americas and the Caribbean

Flycana will be based in Santo Domingo and operate to 23 destinations with its initial fleet of seven aircraft, increasing its destinations served to 45 by the company’s fifth anniversary.

Mr Jacobsen told conference attendees that North American routes will make up approximately 45% of Flycana’s network, with the remainder operated to Central and South America, and elsewhere in the Caribbean.

The airline’s network footprint will be “wide and shallow”, Mr Jacobsen explained, saying that Flycana would operate to many destinations on a low frequency basis. Its targeted average stage length is three hours.

Flycana’s targeted passenger segment is visiting friends and relatives (VFR), and Mr Jacobsen said that there is an opportunity to stimulate passengers in that segment. The airline had calculated that there are 2.5 million Dominicans living in the US – but only 900,000 are travelling by air. 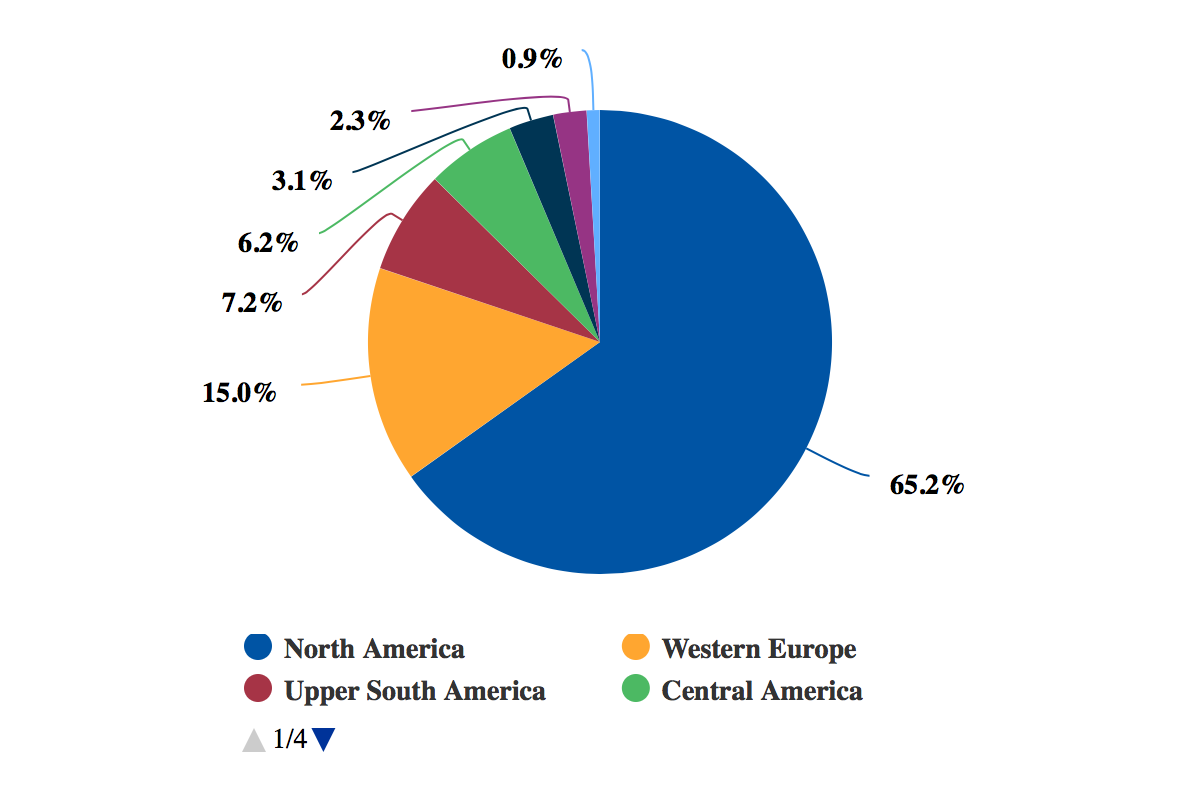 JetBlue is the country’s largest airline measured by arriving frequencies.

Airlines serving the Dominican Republic measured by percentage of arriving frequencies, as of late Feb-2020 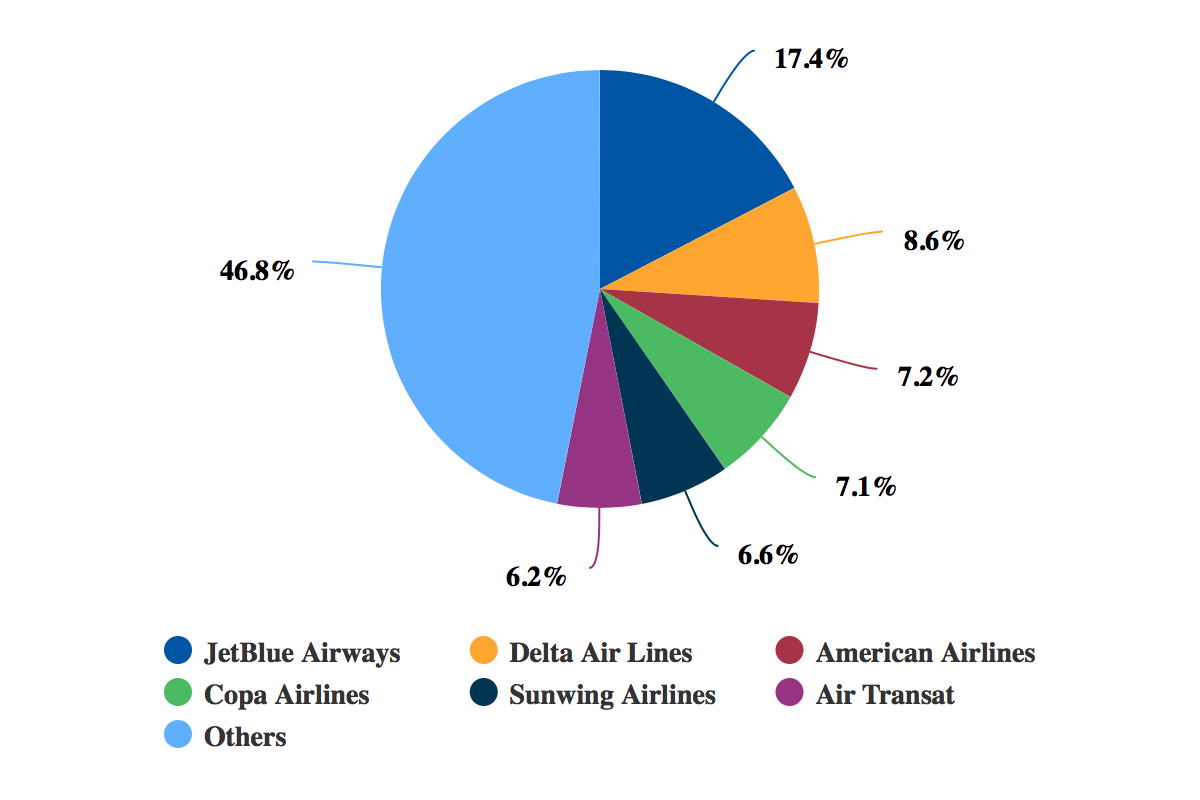 Mr Jacobsen also said that the Dominican Republic welcomes approximately eight million visitors per year, and with affordable travel options, those travellers could visit other places in the Caribbean.

There is increasing service between Upper South America and the Dominican Republic.

Avianca recently unveiled plans to increase its frequencies between Bogotá and Santo Domingo, and Sky Peru is planning to introduce service from Lima to Punta Cana. From North America, Frontier Airlines is launching flight from Miami to Punta Cana in Apr-2020.

Flycana has obviously assessed the market potential for a new airline based in the Caribbean, including the inherent challenges in the region. The Caribbean is notorious for levying heavy taxation on aviation, and has rarely softened its stance in that regard. Those taxes have made it tough for other low cost airlines to survive in the region over the long term.

Mr Jacobsen explained that Flycana is in discussions with the Dominican Republic’s government about the benefits that lower fares could bring to the country, including an increase in tourism.

Flycana’s management has some experience in working with government while attempting to establish a low cost airline. In 2012 Mr Jacobsen was the company CEO at the time of launch of Viva Air Colombia, which was the first low cost airline to begin operating in the country.

Although Mr Jacobsen left Viva Air Colombia a few years ago, he left a foundation in place for the low cost model to gain traction in the country. The airline was Colombia’s third largest domestic airline through the 10M ending Oct-2019, measured by passengers carried, with a 19% share.

Viva Air Colombia continues to build a solid passenger base, despite challenges it faces from taxation in the country. Colombia’s total passenger levels reached approximately 38 million for the first ten months of 2019, and previously the country’s government has stated that annual passenger levels could reach 100 million by 2030.

Flycana’s management needs to convince the Dominican government that there is an opportunity for passenger stimulation in the Caribbean and that the country can benefit from an expansion of air travel in the region, but Flycana has a level of optimism that it can usher in the low cost model from a headquarters based in the Caribbean.

However, the company is not blind to the fact that it could take some time and patience for long-needed reforms in the region to materialise.

The Caribbean is overdue for sustained low cost service

The Caribbean is long overdue for the kind of low cost service spreading across South and Central America, which is stimulating passenger traffic and, in some cases, converting a still sizeable bus traveller base over to air travel.

Flycana has the management experience to establish true low cost service in the Caribbean, and no shortage of ambition. But the company also has the measure of patience necessary for continuing dialogue with Caribbean governments about the benefits that low cost service can create.

Now it is time for government to adopt a more liberalised mindset.