The wave of LCC and ULCC start-ups that has swept over Latin America during the past couple of years has moved to the Caribbean, with the establishment of the ULCC Flycana in the Dominican Republic.

Flycana aims to launch operations by the end of 2018 after securing the AOC of Dominican Wings. The airline is aiming initially to serve the New York-Dominican Republic market, and then branch out to North and South America, as well as other Caribbean destinations.

The Caribbean is a tough market for an LCC or any other type of airline start-up. The region is notorious for levying heavy taxation on aviation and shows no immediate signs of softening its stance on long-standing egregious fees and taxes. But Flycana has a seasoned management team confident that now is a prime time to establish a low cost carrier in the Dominican Republic.

Dominican Wings had a short-lived stint as a charter operator, launching service in early 2016 and ceasing operations in Mar-2018.

Shortly after it terminated operations, Dominican Wings stated that it was transitioning to a ULCC rebranded as Flycana. The former Viva Air Colombia CEO was named CEO of the start-up, and the executive chairman for the Argentinian ULCC Flybondi Michael Powell is the Chairman of Flycana’s board. Mr Powell was previously CFO of the European ULCC Wizz Air.

The Dominican Republic is largely a destination market. Data from CAPA and OAG show that 100% of the country’s seats are deployed into international markets.

The country’s largest airline measured by seat deployment is JetBlue, followed by Delta, American and Copa. 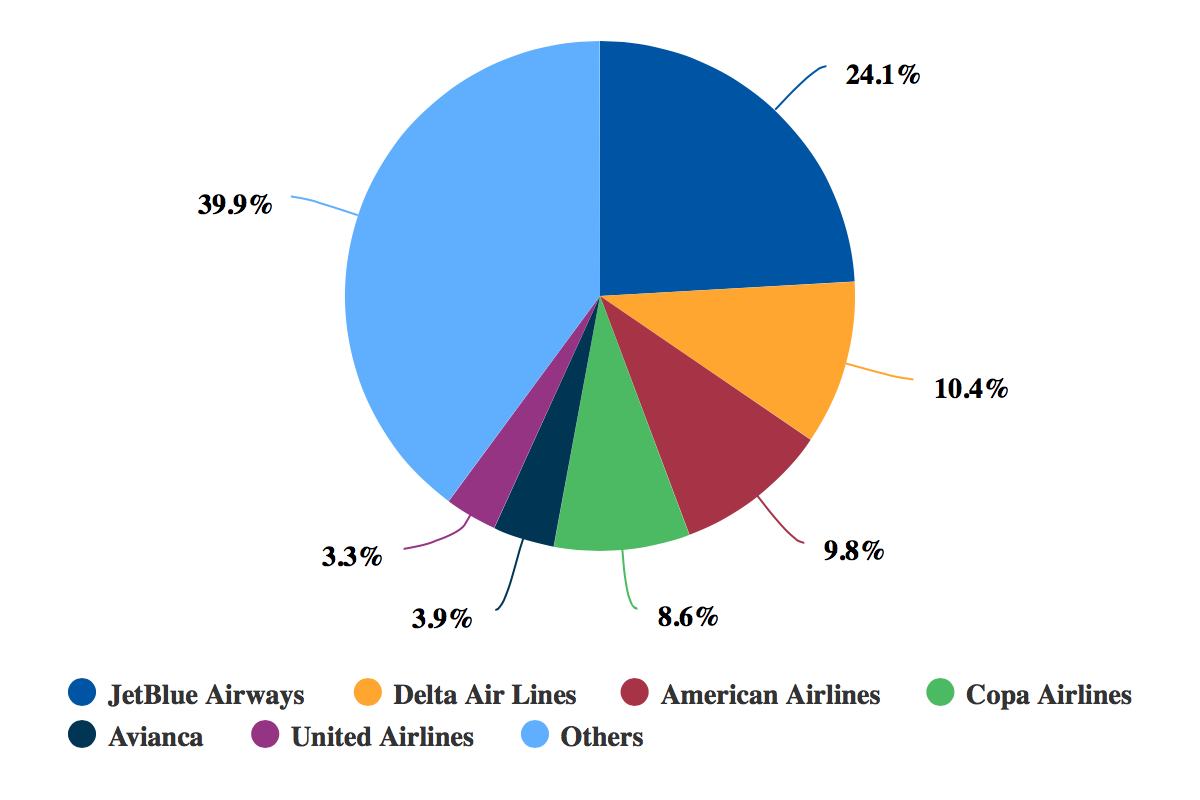 The Dominican Republic's Flycana is still aiming for a 2018 launch

During a recent interview with CAPA TV at the CAPA Latin America Aviation & LCCs Summit, Flycana CEO William Shaw noted that the Dominican Republic has no airline, and highlighted that 90% of travel to the country is leisure based, which means price is the most important factor in making a decision to purchase an airline ticket.

He remarked that Flycana was still working hard to launch in 2018, but its debut could slip into 2019 due to aircraft availability.

The aspiring ULCC has also outlined plans to build a fleet of 28 A320s by 2023 and transport 5.5 million passengers annually.

Mr Shaw told CAPA TV that eventually Flycana would prefer to operate the A320neo, noting that with rising fuel costs “the 180-seat configuration [of the A320neo] seems to be the right aircraft for the LCC we want to start in the Dominican Republic”.

New York is likely the first market for the ULCC

Airline seat share between the Dominican Republic and the New York region (JFK, EWR), as of early Oct-2018

There’s no shortage of service from the Dominican Republic to New York, but presumably Flycana’s plan is to be the lowest fare provider in the market, which could result in VFR and leisure passenger stimulation.

Flycana also plans to serve other points in the Northeastern US, as well as other Caribbean destinations and routes in North and South America.

The last attempt for the creation of a low cost airline based in the Caribbean was REDjet, which had a short-lived stint in 2011 and 2012 operating MD-80 aircraft from a base at Grantley Adams International airport in Barbados.

REDjet faced challenges in operating a consistent schedule as it struggled to gain approvals for flights in the region.  The airline also claimed that subsidised carriers were undercutting its fares.

The Caribbean also has a track record of imposing high taxes on airlines, which obviously would be a hurdle to a potential start-up. IATA has recently highlighted that a short term budget imposes significant taxes on air travellers.

“For a family of four traveling to Barbados from Europe or North America, the new tax will add a total of USD280 to their travel cost. The tax will also affect air travelers within the Caribbean Community nations, adding USD35 to each ticket, a significant increase in short haul markets where traffic is already struggling”, IATA declared.

A lot has changed in the low cost landscape in Central and South America since REDjet’s low cost experiment. But the operating hurdles in the Caribbean, especially taxation, remain pronounced.

Flycana remains optimistic about ULCC operation in the Caribbean

It is logical that the Caribbean would attract an ultra low cost airline, given the penetration of the model across the Americas during the past decade.

In many ways, launching a new airline in the Caribbean is not for the faint of heart. But Flycana’s management remains confident that it can forge a new low cost path in the region.