Flybe. Part 2: Demise may cause some airports to close

The world has been waiting for a while for a black swan to come back home to roost. Now it seems as if a whole flock of them have landed at once.

As things stand, the COVID-19 coronavirus outbreak looks set easily to eclipse previous airborne viruses such as SARS, MERS and H1N1 and bring the global air transport industry to a grinding halt.

There are some countries where the medical event has arrived just when airlines are at their weakest. Accordingly, the demise of the UK-based Flybe, Europe's largest regional carrier, could not have come at a worse time, and the prospects for some British regional airports where Flybe was a critically important customer are not encouraging.

The UK’s air transport business is a case in point. Crippled by some of the highest air taxes in the world (which the airlines are begging the new Chancellor of the Exchequer to suspend in his first budget) and with domestic routes under attack from environmentalists who insist that the railways can do the job better (they can’t, and at the same time environmentalists are against new rail services such as HS2, which would take away many domestic air passengers) – air transport is on its knees.

During the past two and a half years two large British carriers have gone broke – Monarch Airlines and Thomas Cook. Both airlines were outright vacation companies, with only a small part of their trade emanating from business users.

Now they are joined by what was Europe’s largest regional airline, deriving a much bigger slice of its trade from business users (up to 50% of the total) who had come to rely on it, even if it did sometimes suffer the unwanted title of ‘Fly Maybe’.

As pointed out in CAPA – Centre for Aviation reports, 88 of Flybe’s 120 routes were uncontested – no other company wanted to operate them, whether or not they were in competition with Flybe.

Indeed, Flybe’s CEO Mark Anderson, in a letter addressed to the (again, new) Secretary of State for Business, Energy and Industrial Strategy Alok Sharma, argued that only a "small number" of Flybe's routes would be taken up if the airline were to cease operations, and these "almost certainly at reduced frequencies".

The mainstream British media tends to be anti-aviation and such has been the case with Flybe, which did not receive much in the way of positive press for being ‘saved’ by way of a loan from the government only the month before (the loan was also opposed strongly by some other airlines).

But the media seem to have woken up, at last, to the realisation that not only are airline jobs at risk, but that airports might even close as a result of Flybe’s failure (with flow on impacts to their local region). That’s how influential the airline was.

The huge GMB Union has urged the UK Government to implement a five-point regional airport rescue plan to support eight (unnamed) regional airports that GMB deems to be at risk of closure following Flybe's suspension of operations. Flybe operated more than 50% of scheduled departures recorded at each of the eight airports in 2019.

Airport operators have not been slow to demonstrate their concern.

AGS Airports – a consortium of Ferrovial and Macquarie which operates Southampton Airport on the English south coast, as well as Glasgow International and Aberdeen airports in Scotland – described the failure of Flybe as a "devastating blow." 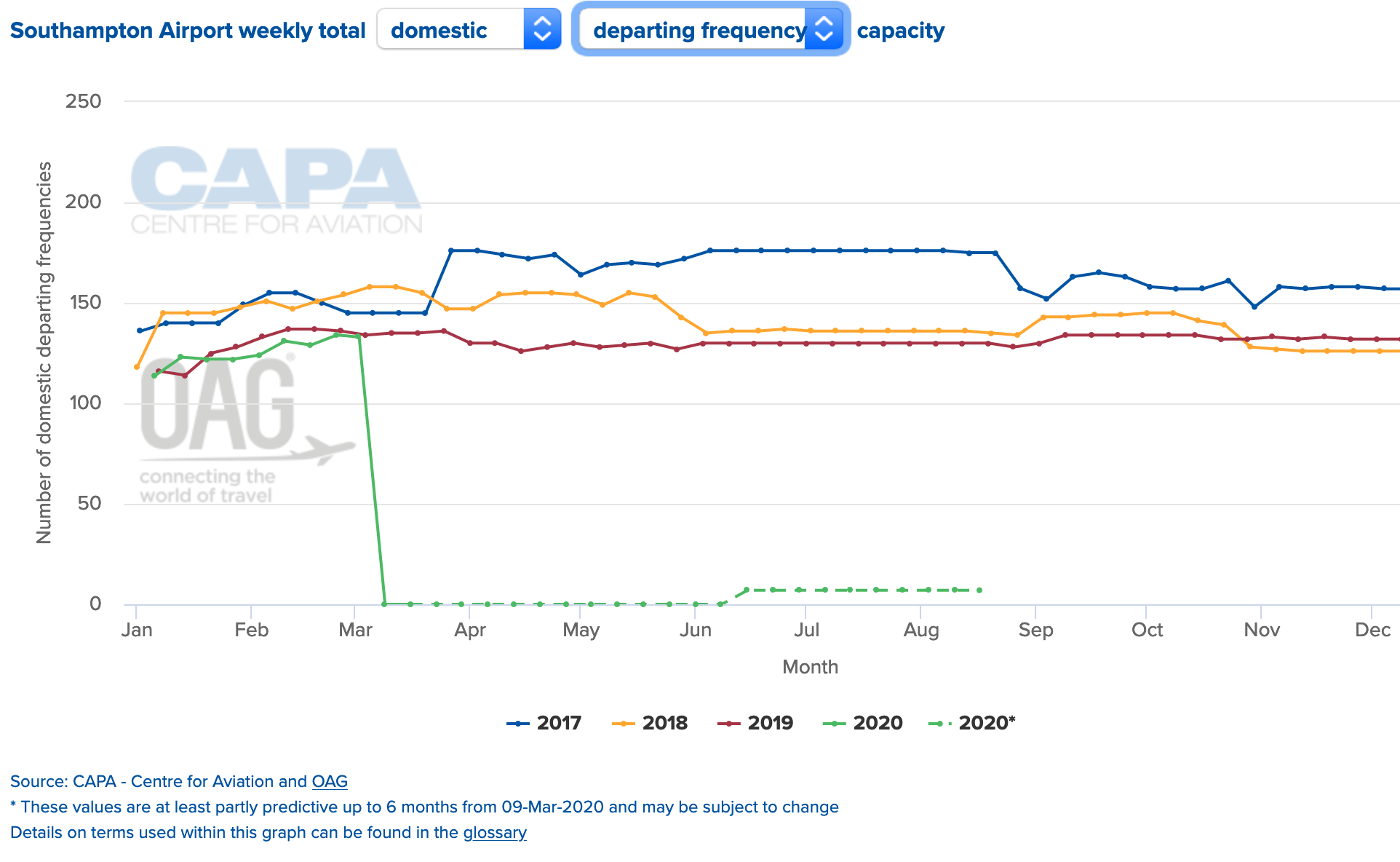 In common with other airports AGS began to seek alternative airlines to “backfill” routes operated by Flybe.

But there are not many options in the UK where considerable consolidation has taken place.

The list of British airlines that could have ‘filled the gap’ is long, but none of them is still around

A quick glance at a list of airlines that have failed or been absorbed in the UK in the past two decades or so suggests some potential successors of old that could have taken over on domestic, and possibly international, routes: Air Ecosse; Air Southwest; Air UK; Air Wales; Brymon Airways; Birmingham European Airways; bmi regional/Flybmi; bmibaby; Dan-Air; Gill Airways; Maersk Air; Scot Airways/Suckling Airways; Virgin Little Red and Yorkshire European Airways.

But they are no longer here.

Instead, there is a very small number of airlines that could take on Flybe’s role, and airlines which in a few cases are already doing so, such as Loganair and Eastern Airways. The former was a franchise of Flybe until 2017, while the latter still was when Flybe went under.

EasyJet, Ryanair, Jet2 – none of them is appropriate to most of the vacated routes, nor is BA

But those such as easyJet, Ryanair and Jet2 operate a different business model altogether, and most of Flybe’s routes would not suit them. And they would certainly not suit British Airways, which for a long time was a 10% shareholder in Flybe.

Flybe was a regional carrier in every sense. Historically Flybe avoided London Heathrow and latterly had very few routes there, whereas that airport is British Airways’ raison d’être. But the domestic regions are not on its to-do list.

Indeed, as was said after Flybe almost went under earlier this year – if the airline were to fold, another Flybe would have to be invented to do the same job.

Small remote airports are most under threat…

Clearly, smaller and remote airports where Flybe had the majority of the capacity are those under the greatest threat, and especially so if other UK airlines are physically, geographically, distant from them.

Loganair, for example, is based at Glasgow Airport and has hubs at Edinburgh, Inverness, Dundee, Aberdeen and Norwich airports; four of them in Scotland and one on the English east coast. It has no evident connection to airports such as Cornwall Airport Newquay in the far west of England, which is one of those considered to be under severe threat.

Nor Southampton, used as an alternative to London Heathrow by business passengers along the M3 motorway ‘corridor’ and where Flybe had 85% of the capacity. In Southampton’s case, it might even be better to try to attract continental Europe-based airlines to operate routes, although such an eventuality could easily be undermined by the UK leaving the EU.

Similarly, Eastern Airways is based and operates mainly down the eastern coast of the UK as its name implies, apart from a base at Cardiff Airport.

Neither airline is really in a position to ramp up’operations in ways they have been saying they could do, having no aircraft on order in either case (Source: CAPA Fleet Database). Both operate smaller aircraft than Flybe, which was transitioning to a Bombardier Dash 400 fleet, although some of those could become available.

…but some of the principal ones will be impacted, too

In the UK, Flybe's largest base was at Birmingham Airport and the airline had other large bases at Belfast City and Manchester airports.

This is another scale of operation altogether. Manchester is the UK’s third busiest airport and Birmingham the seventh, both with very large catchment areas, whereas Belfast City is that metropolis’ inner-city airport, primarily for business purposes with essential domestic connections.

Could any of them be severely adversely affected by the demise of Flybe? All of them might be, and especially so as they have already taken a hit from the Monarch and Thomas Cook collapses.

Manchester has collectively lost close to 30% of its 2017 level capacity from the three events and Birmingham almost as much - although quite a lot was eventually replaced. They are making the right noises about airlines such as Loganair and Eastern Airways, and others, filling gaps, but in most cases it won’t happen overnight. Moreover, the connection from Flybe flights to Virgin and other long haul services at Manchester has also been lost.

And there will be questions as to whether Loganair, Eastern Airways and any other small airlines that enter the fray can upscale operations accordingly, and whether they will be able to make their models pay on such a bigger scale.

Flybe couldn’t. What both carriers, and others, really need is a much-improved programme of public service obligation (PSO) routes. The UK is lacking in this respect compared with many other countries, and it could be argued that Flybe was operating many of its routes as a public service anyway.

The charts below demonstrate that with regard to point-to-point services the biggest losers are Belfast City and Southampton. But 18% is a hefty percentage at Birmingham too, and the 8% at Manchester is made worse by the connection losses.

Belfast City Airport CEO Brian Ambrose has stated: "The removal or phased reduction of air passenger duty (PD) is one mechanism that government could enact in the forthcoming budget that would go some way to rebalancing the economy".

Mr Ambrose said that the coronavirus outbreak and the collapse of Flybe together had positioned the airport at the "centre of a perfect storm". He said: "Safeguarding regional connectivity is essential if we are to thrive as an island off an island".

Amsterdam Schiphol Airport, for example, just listed Flybe in its top 10 carriers by passenger numbers for 2019, at 823,000 (+1.6%), not far behind both Air France and Lufthansa.

Another recession is just not what is needed right now

It is unlikely that there will be significant lay-offs at Birmingham and Manchester airports arising solely from the Flybe situation, but current events are a warning about what can happen when the constellations are badly aligned.

Even before the mysterious oriental virus arose out of nowhere in Wuhan in Jan-2020, financial analysts were forecasting a downturn this year and perhaps even another global recession.

With markets tumbling as this is written, such a recession seems likely, not just possible. On top of everything else, that will spell serious problems for airlines and airports alike.

The UK government has announced that it will undertake a review of Air Passenger Duty (APD) as a part of its new budget, after calls from the aviation industry to scrap the tax.

It said that it would “consider the case for changing the APD treatment of domestic flights, such as reintroducing a return leg exemption, and for increasing the number of international distance bands”.

The results of the consultation will be published in the spring. At present, rates will remain frozen on short haul flights at GBP13, but the rate for long haul economy will increase by GBP2.

There will be a GBP4 increase for those travelling in premium economy, business class and first class, and GBP13 for those using private jets.

Unite the Union reported Southampton Airport is in "imminent danger" of being forced to close without government intervention due to the collapse of Flybe, which accounted for 85% of services. Unite suggested the government extend and create loans to carriers to ensure they can retain staff and routes until bookings recover. Swissport has notified of plans to cut around 40% of its workforce of 400 employees at Southampton Airport.