Lonrho (-4.0%) was down after a strong rise the day prior. Subsidiary, Fly540 Africa reportedly plans to sign a franchise agreement with Fly540 Zimbabwe by the end of this month, moving the Zimbabwean carrier closer to receiving an Air Operator’s Certificate from the Civil Aviation Authority of Zimbabwe.

Fly540 Zimbabwe is yet to receive an AOC as it has not received a franchise agreement to operate under the Fly540 brand. The carrier is also soon to complete its business development plan, to be submitted to the Zimbabwe Ministry of Transport and CAAZ.

In the Middle East, Kuwait National Airways (+1.9%) made the day’s only gain, as the Kuwait Stock Exchange ended trading up 0.5%. Royal Jordanian, Air Arabia and Jazeera were all flat.

Elsewhere in the Middle East, Kuwait Airways Corporation Chairman, Hamad al-Falah, reportedly announced the Kuwait Investment Authority has been authorised to establish a shareholding company to hold the carrier’s assets, named Kuwait Airways Co. Assets include 17 aircraft - two B777s and a mixed fleet of A340s, A310s, A320s and A300-600s. Kuwait Investment Authority is currently forming a committee, which has 12 months to implement the privatisation. The fund plans to offer a 40% stake to the public, 35% to a strategic investor and a 5% stake to employees, and retain the remaining stock. The new company will be established with capital of USD762 million (KWD220 million). 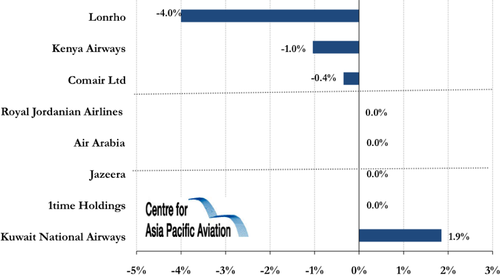