With only a year under its belt, FLY Leasing is working its way to become a worldwide aircraft lessor, according to CEO Colm Barrington, who spoke before the JP Morgan Aviation, Transportation and Defence conference yesterday.

FLY Leasing emerged as a public company since it was founded in Sep-2007 under the name Babcock and Brown Air. Since the beginning, FLY has contracted BBAM to provide the servicing and management of their fleet, however has never been owned by BBAM or B&B. FLY has 60 narrowbodies in its portfolio because “it is the workhorse of the aircraft leasing industry,” he said, adding that it is also easier to lease and release and is more profitable. 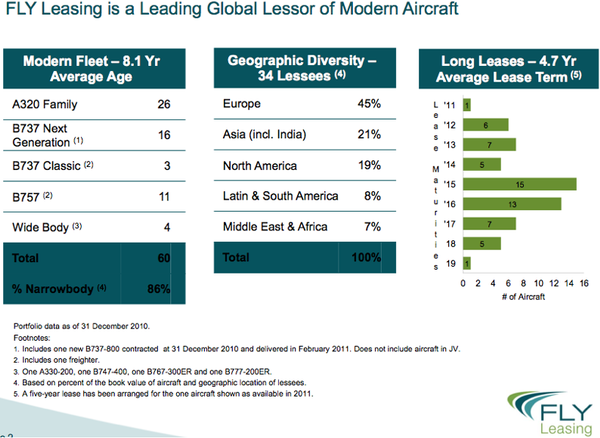 In its first year, it posted a net profit of USD52.7 million on USD253.7 million in revenues offering up USD1.86 earnings per share. Mr Barrington reported that available cash flow reached USD156.6 million with total assets of USD1.9 billion. Total liabilities, he said were well under that at USD1.5 billion. Total equity is USD474.9 million while total cash is at USD329 million and unrestricted cash came in at USD164.1 million at 31-Dec-2010.

Mr Barrington explained the relationship with BBAM saying that when that company was sold to its executive management, FLY acquired 15% of a stake in the management company. He reported that in the eight months it has earned USD2.9 million from its USD8 million investment making it very happy with the deal. BBAM maintains an 85% position, along with a 4% position in FLY Leasing as part of an alignment between the two companies.

“BBAM gives us a worldwide platform given its position as third in the aircraft leasing market behind ILFC and GECAS,” he said. “It has an extensive relationship with over 200 airlines around the world and is a leader in sale-and-lease-back deals.”

Mr Barrington reported that, in the year since its inception, the company has taken advantage of the improving economics around the globe to make strategic aircraft disposals and acquisitions.

On the sales side, the company sold four aircraft, all at gains to net book value. Since its IPO, it sold an additional six aircraft in the same favourable circumstances, with four of the six being over 10-years old.

It has also committed to purchase three B737-800s for flydubai, with two aircraft delivered. It also sold one of three of those commitments for a net cash gain. Earlier this year, it took a majority interest in a joint venture to acquire four B767s.

“Our strategy for the future is to pursue smart growth,” Mr Barrington told investors, “by targeting prudent, one-off acquisitions and taking advantage of opportunistic investments. We will also work on extending leases before expiration to minimise risk and will be converting/reconfiguring aircraft for re-lease or sale.”

However, unlike his colleague at Aircastle, who spoke later, he is not interested in the freighter market. He added that its strategy includes continuing to repurchase equity and debt that is accretive to shareholders and will monetise aircraft when the price is right.

He noted the industry’s strong recovery and projections for the future would create more demand for leasing companies. Operating leases have grown from less than 100 in the 1970s to more than 7,000 today or about a third of the worldwide fleet, while more than half the world’s airlines - about 400 carriers - used operating leases, he reported, adding leasing provides fleet and financial flexibility and access to better equipment without the residual-value risk. 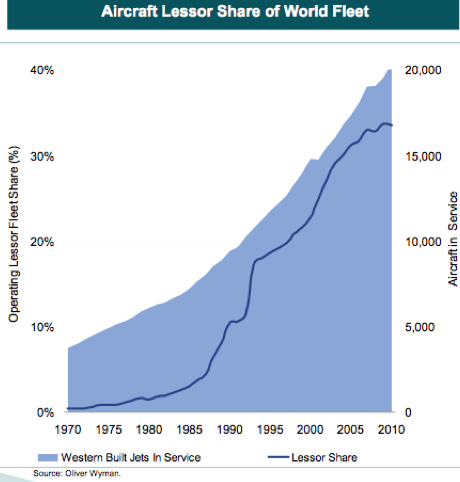 Mr Barrington can be forgiven for discussing the basics behind leasing, and behind FLY Leasing in particular, since the investment value of the industry is a message that Air Lease Corporation CEO Steven Udvar-Hazy has been trying to get across to investors for decades.

Noting that investors shy away from leasing, owing to the volatility of the airline industry, Mr Udvar-Hazy, expressed frustration that investors still don’t understand the difference. Indeed, he suggested one thing when he spoke to the International Transport Aircraft Traders conference last week.

“We can demonstrate better fundamental credit quality than airlines,” he said. “We are an industry that serves airlines. We have proven track records for profitability with dozens of clients and diversified portfolios of assets and leases. We are much less risky than airlines. Our profit margins out perform both manufacturers and airlines and you don’t see a decline in margins for lessors. If you select the right asset, obtain competitive financing, work closely with customers, manage your portfolios and have the right professionals leasing will continue to have a high profit margin in any economic environment.”

Citing growth in developing markets, re-fleeting needs in developed markets, return to airline profitability and sold-out production lines, Mr Barrington forecast a bright future for the leasing. This came on the heels of Mr Udvar-Hazy’s comment last week when he said the rise of the developing markets has reduced the cyclicality of the industry.

Mr Barrington noted that, in the US, there are 30 aircraft per million of population compared with 13 in Europe. “Those economies will have lower GDP per capita in the US and Europe than emerging economies,” he said. “So there is a huge potential for growing those ratios in the developing markets over the coming years. There is also another major factor at play. If you look at North America there are a lot of older aircraft so there will be a need for significant re-fleeting there.” 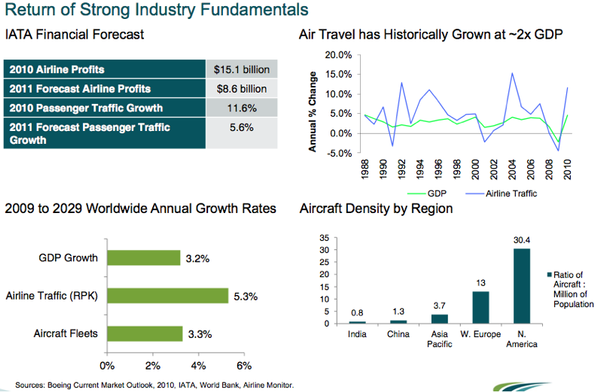