A recent profit warning by Finnair highlights the challenge in converting an operationally successful niche strategy, based on capturing Europe-Asia connecting flows via its Helsinki hub, into sustainable profit. In spite of the advantages of its geographic location for this strategy, its strong performance on punctuality and reliability and a well regarded brand, Finnair has perhaps lacked scale to compete profitably in the global market. In addition, its short haul feeder operations have felt the sting of LCC competition. Against a weak revenue backdrop, it is rightly prioritising cost savings in 2014.

The long haul operation should benefit from the newly commenced joint venture with JAL and BA on routes to Japan and there is at least some aspirational legitimacy in Finnair's confidence that it can tap into China's vast potential. Moreover, from 2016, Finnair will become the first European operator of the A350, providing it with a considerable unit cost advantage over its existing A340 fleet. Meanwhile, it has crucial negotiations to conclude over labour cost savings and must also make a decision about short haul fleet renewal.

Finnair has a target to double its revenues from Asia between 2010 and 2020. It is already a very important part of the business: in 2013, 42% of Finnair's passenger revenue and 49% of its ASKs came from Asian traffic. In 2000, Finnair had just three destinations in Asia (Bangkok, Beijing and Tokyo Narita). In 2014, it has 15 destinations and has increased its Asia capacity more then seven-fold since 2001 (in ASK terms). 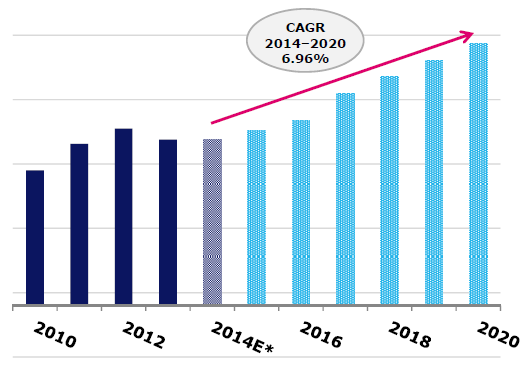 * Based on guidance given on 7 May 2014:”Finnair estimates 2014 turnover to be close to 2013 levels.” This guidance was subsequently revised downwards.
Source: Finnair Capital Markets Day presentation May-2014

At its Capital Markets Day in My-2014, Finnair presented forecasts that Europe-Asia travel will more than double from 60 million passengers in 2010 to 130 million in 2020. A large part of this potential sits in China, while Finnair also now has a strong partnership operation into Japan.

China's top three hubs - Beijing, Guangzhou and Shanghai Pudong alone already have a combined passenger throughput of more than 300 million annually. Finnair also points to the potential of China's second tier cities. Urban clusters around Shanghai, Jingjinji, Shandong and Guangzhou each have economies with a GDP similar in size to those of medium sized European countries such as Switzerland, Belgium and Austria.

Moreover, there are 35 Chinese cities with a population of more than two million that currently have no non-stop flights to Europe. 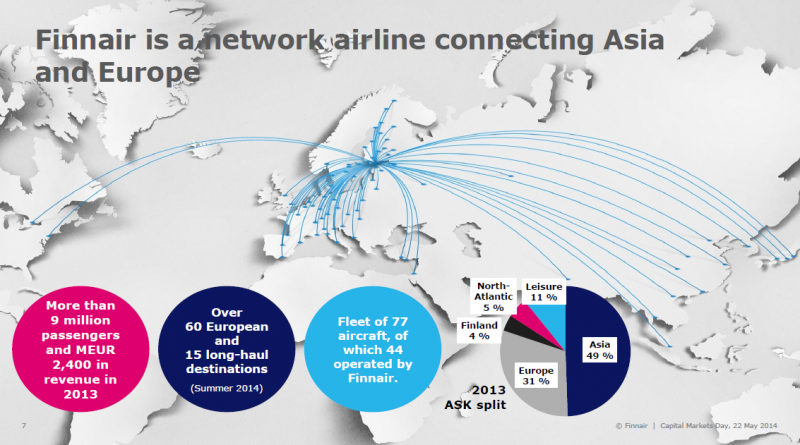 The so-called "Siberian Joint Business Agreement" between Finnair, British Airways and Japan Airlines on routes between Europe and Japan commenced on 1-Apr-2014. Finnair makes up 26% of this Joint Business Agreement (JBA) and Japan accounts for 16% of Finnair's revenues. This is now the largest JBA between Europe and Japan, with a share of around 30%, ahead of Air France-KLM and the Star Alliance grouping of Lufthansa, ANA, SWISS and Austrian.

With regulatory approval, the members of the Siberian JBA share revenues according to capacity and coordinate their pricing. It is "critical to Finnair's continued success in this region", according to the Capital Markets Day presentation given by SVP Resource Management Greg Kaldahl. He said that there had been no adverse customer experiences and that implementation was flawless. 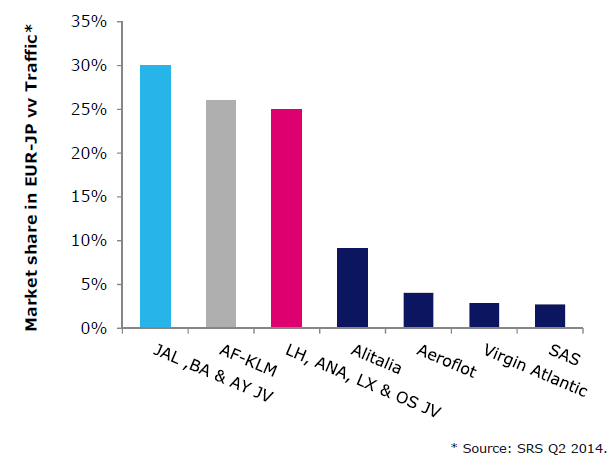 Finnair gained its first experience of operating within a JBA through its membership of the Atlantic partnership with American Airlines, British Airways and Iberia, which it joined in Jul-2013. It is very much a junior partner in this JBA, with only 1% of its combined capacity. Moreover, Finnair's two North American destinations (New York and Canada) accounted for only 3% of its passenger revenues in 2013.

Nevertheless, the impact of the JBA appears to have been positive on Finnair's North Atlantic load factor and RASK (see chart below). If the Siberian joint venture can provide a similar boost to RASK on Japan routes, the revenue benefit will be substantial.

Finnair also sees the Atlantic JBA as a platform for future growth in North America, identifying Chicago, Philadelphia, Miami, Los Angeles, Phoenix, Dallas Fort Worth and Honolulu as opportunities for the addition of profitable new routes. 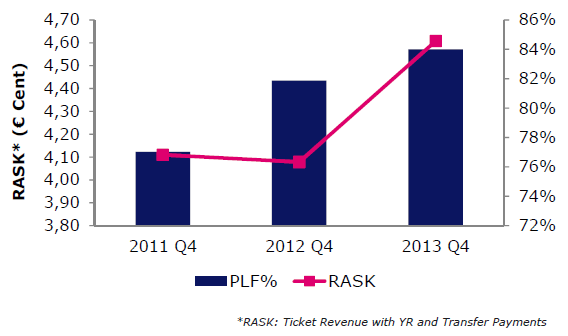 Finnair now has 21% of its capacity and 18% of its revenues under joint ventures, providing it with some additional stability, the potential to improve unit revenues through price and schedule coordination and opportunities for further growth.

Finnair also sees opportunity in Russia and in the Pacific Rim. This summer Finnair will open new routes to the Russian cities Nizhny Novgorod (from 25-Jul-2014), Samara (7-Aug-2014) and Kazan (18-Aug-2014).

Finnair's Asia strategy is based on the geographic location of its Helsinki hub. This means it can offer the shortest routes connecting many cities in Europe and Asia, and give it the ability to operate a return flight within 24 hours using one aircraft.

This is backed up by its operational efficiency and reliability, its niche brand strength (since 2009, the only Nordic airline to be four star rated by Skytrax) and Finnair is hoping to give it further support through the ongoing development of its long haul product. In addition, Helsinki Vantaa Airport, with its three runways and a 35 minute minimum connection time, has room to grow. 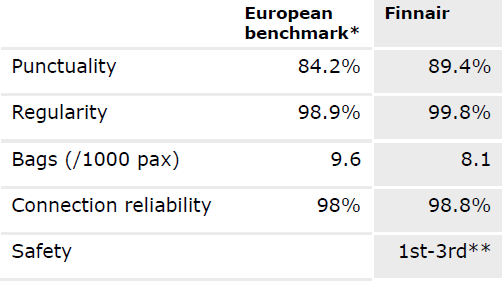 Although Vantaa has room for growth, there is some congestion in the middle of the day into early afternoon and Finnair plans to move from two banks to a four bank structure.

This would allow it to utilise a higher share of the airport's capacity, by spreading traffic better across the day.

Cost efficiency is crucial and labour holds the key

A key consideration is the need to be cost competitive, not only on long haul against Asian and Middle Eastern carrier, but also on short haul. Finnair's high wide body utilisation levels and 24 hour rotations are a cost efficiency advantage on long haul, which will also benefit from A350 deliveries (see below), although labour costs give scope for further improvement.

On the short haul network, on which Finnair depends for feed into the Asian network, European LCCs have had a considerable impact and exposed any airline whose intra-continental operations are not cost efficient. The CASK reduction achieved by Finnair since 2010 needs to go further and this is a current priority for the airline's management.

Finnair's cost reduction programme has achieved a total of EUR167 million in savings so far, including EUR140 million originally targeted in Phase I, EUR23 million of additional Phase I savings and EUR4 million of its Phase II target of EUR60 million. The remaining cost reduction targets are personnel-related and Finnair is still in negotiations with labour representatives on wages and working hours. It has set a 17-Jun-2014 deadline for agreement on savings with the Finnish Airline Pilots' Association.

In order to increase its negotiating power and to create an alternative path, Finnair is developing plans to increase the outsourcing of flight crew, with plans to outsource the cabin staff on a maximum of three long-haul routes in 2014, increasing this to more than ten routes in the next stage. It is also considering establishing a subsidiary that would produce cabin services and sell them to Finnair.

Long haul operations will benefit from the A350 from 2016, while Finnair considers short haul fleet options

Cost reduction is the current top priority, but Finnair will shift its emphasis in 2015 to include revenue enhancement initiatives and the entry of its first A350s into its fleet. Its expectation is that this will then provide the platform for a focus on growth from 2016.

Crucially, Finnair's Capital Markets Day presentation stressed that it will grow to improve profitability and return on invested capital and not simply for the sake of growth.

Finnair will be the first European operator of the A350, which will its A340 fleet from 2016. This will provide additional capacity at lower unit cost and eventually complete a process of fleet renewal that has already seen Boeing 757s replaced by A321s.

The A350 will have around 40 additional seats compared with the A340 and an estimated seat cost advantage of up to 30% (source: Airbus, cited by Finnair). This leads to an estimated annual cash seat cost saving of around EUR10 million per aircraft.

Comparison of cash cost per seat for A350 versus A340

Finnair's narrow body A320 fleet is approaching mid-life, but it recognises that further investment in short haul capacity requires a competitive cost position. Its European feeder operations also include contract flying carried out by Flybe, which is now operating one third of flights on Finnair's network on its behalf, and this approach could be further expanded. A decision on short haul fleet renewal is expected in the next 18 to 24 months.

Finnair's Chief Commercial Officer Allister Paterson's Capital Markets Day presentation outlined the airline's new commercial strategy. This is aimed at closing a revenue gap of EUR80 million annually, identified by Finnair as the difference between its flown revenue and the optimal level it believes it could achieve with reference to network and schedule quality and relative market performance. In 2013, Finnair judged that it fell short of this optimal revenue by around 4% or 5%.

The commercial strategy has three areas of focus for improved revenue generation. These are investment in "smart" products, leveraging technology and developing Finnair's expertise in "revenue science".

"Smart" product investment includes catering, inflight entertainment and fully flat seats and forthcoming developments such as lounge renewal, on-board wi-fi and the new long haul fleet mentioned above. In the area of technology, Finnair is investing in mobile apps and other enhanced sales applications to stimulate inflight and ancillary revenues and developing other applications to enhance the customer experience (such as distributed IFE to personal devices).

Revenue science builds on the enhancement of demand, through a combination of localised sales strategies and Finnair's membership of oneworld and the JBAs discussed above, to optimise the resultant revenue. This involves ensuring that online pricing is competitive and developing and applying analytics to optimise revenues.

In 1Q2014, Finnair estimates that its revenue shortfall versus its optimal scenario narrowed to 3%, indicating progress with these initiatives. Nevertheless, one and a half weeks after its Capital Markets Day, on 2-Jun-2014, it lowered its 2014 revenue guidance. It previously expected revenue this year would be close to 2013's level, but now expects 2014 revenue will be "significantly lower" than last year, since unit revenues have been weaker than expected.

RASK fell by 4% in 1Q2014 and total revenue fell by 8.4%. With 1Q2014 CASK down only 1.0%, Finnair's operating loss increased by 95% to EUR34 million for the quarter. The lower FY2014 revenue guidance suggest that this RASK weakness may have deteriorated further in 2Q.

The company has still not provided profit guidance for FY2014, preferring to await the outcome of employee negotiations on cost savings. After falling back into loss in FY2013, the weaker revenue outlook and 1Q's losses point to a serious challenge in reversing this falling profit trend in FY2014.

Finnair has a longer term target to reach a 6% EBIT margin. This will require further cuts in CASK, the subject of the cost reduction programme, together with RASK improvements, for which it expects Far East and Asian network to be the main engine (although it anticipates RASK reduction on other parts of the network).

At the Capital Markets Day in May-2014, CFO Erno Hilden said that the 6% EBIT margin target was "well within reach".

Current revenue trends suggest that the revenue gap may be harder to close than Finnair previously thought and that this target may be slipping.