Shares in Finnair dropped 8,3% in trading yesterday, as the company's CEO Mika Vehviläinen stated he expects first quarter profits to weaken due to the natural disaster in Japan and conflicts in the Middle East and North Africa.

Finnair is among the airlines most exposed to any weakening of traffic in the Asia Pacific and Mr Vehviläinen stated the Japanese disaster will affect the demand for services in upcoming weeks and months.
Finnair also expects the strong rise in oil prices due to the crisis in the Middle East and North Africa will have a detrimental effect on the company's first quarter and annual results.

SAS stated passenger numbers on services to Japan have declined leading the carrier to cancel services and adjust its flight schedule. For SAS, Japanese travellers represent less than 1% of the airline's total passenger numbers, and as a result, the company does not expect falling demand to have a significant impact on its revenue.

Lufthansa resumed services to Tokyo on 24-Mar-2011. The carrier had previously stated it would divert services from Tokyo to Osaka and Nagoya until 27-Mar-2011. Lufthansa is also reinstating its daily A340 services from Frankfurt and Munich to Tokyo. "In the light of the exceptional circumstances in Japan, these flights will be routed through Seoul. Lufthansa meanwhile is continuing to monitor developments in Japan carefully and remains in close contact with the relevant authorities."

Turkish Airlines is reportedly seeking to raise its stake in Air Bosnia from 49% to 100%.

Air Berlin CEO Joachim Hunold predicted a return to profitability in 2011 as economic growth, a decline in unemployment and increasing demand for business travel boost passenger numbers. The carrier is forecasting a positive EBIT result in 2011 with the CEO noting that the carrier plans to counter EUR180 million in higher fuel costs in 2011 with increased surcharges and a EUR100 million saving plan. 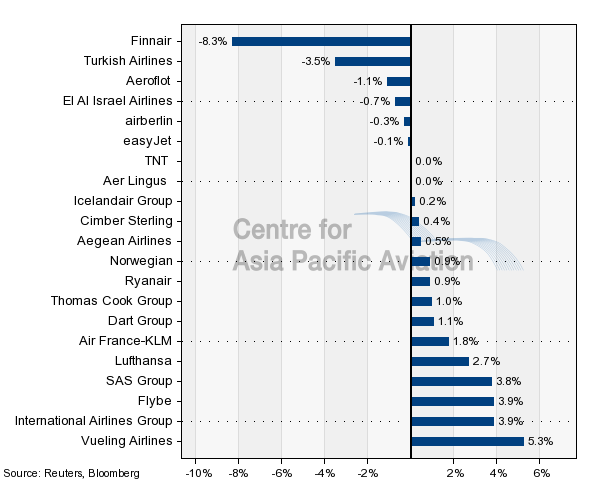