Ferrovial, parent of BAA, confirmed that the UK airports operator would sell approximately GBP1 billion in bonds through a number of sales in 1H2010 to help refinance debt. Ferrovial has already injected GBP500 million into BAA in preparation for the bond issue.

Ferrovial also announced that it expects UK regulators will decide by Mar-2010 whether the company will be forced to sell of London Stansted Airport. The UK Competition Authority forced BAA to sell London Gatwick airport. Ferrovial sold the airport to Global Infrastructure Partnership (GIP) for GBP1.51 billion in Oct-2009. GIP is now planning to sell a stake in Gatwick next year, although it would retain control, according to Bloomberg reports.

However, cargo appears to be returning from the disastrous falls of late 2008, with Germany’s Frankfurt-Hahn Airport reporting cargo volume in Nov-2009 rose 36% year-on-year to 21,660 tonnes. 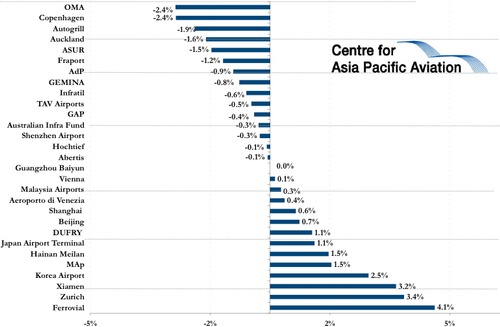