Facing up to realities; ATA airlines show signs of denial. And they could be the biggest losers

WEEKLY REFLECTIONS WITH RON KUHLMANN & THE CENTRE. Consider this extract from US Air Transport Association's (ATA) 2009 Annual Economic Report: “…as your flight makes its way across the country or across the globe, airline employees – onboard your flight and throughout the system – are doing their best to make sure that your journey is safe, pleasant and on schedule.

Unfortunately, even the best-laid plans sometimes do not work as expected and, when that happens, customers are understandably disappointed. Because their goal is to exceed customers’ expectations, airlines strive every day to make better plans. Government reports indicate that those efforts are paying off; customer service is, in fact, improving.

Airlines know that satisfied customers are loyal customers and, in today’s extremely competitive marketplace, airlines are vying for loyalty, constantly rethinking and revising procedures to provide even better service to their customers. Airline service continues to evolve in response to the needs of customers. Not too long ago, frustrating waits with airline reservation agents; piecing together multiple tickets on multiple airlines; standing in long lines to check and recheck bags; and 1950s-era communications, navigational and surveillance systems were the norm. Today, passengers book reservations, check in for flights and print boarding passes online from their homes, offices or mobile devices; schedule seamless itineraries while airlines and their partners take care of the logistics; watch real-time television and their choice of blockbuster movies; and crisscross the continents without the slightest worry.

As the customer service evolution continues, airlines are focused on addressing a dilemma that is largely outside of their control: flight delays. Delays – infuriating to both airlines and their customers – cost the nation’s economy USD40 billion each year, according to the congressional Joint Economic Committee, in lost productivity, missed business meetings and opportunities, cancelled and delayed vacations and, perhaps most importantly, disrupted family events. The nation’s outdated, inefficient air traffic control (ATC) system is the primary culprit, allowing poor weather to wreak havoc on flight schedules, and delays in New York and in other traffic centers to ripple throughout the system. The answer: accelerate ATC modernization. We – the administration, agencies, airlines, airports, air traffic controllers, general aviation and others – must work together and take the necessary steps to get the job done – in a few years, not a few decades. If we do, flight delays, fuel burn and emissions will decrease, improving efficiency, customer service and environmental performance.

Ultimately, the overall economy will reap tremendous benefits and as the economy recovers, the customer service evolution will continue.”

The Air Transport Association (ATA), founded in 1936, describes itself as “the nation’s oldest and largest trade association” with three primary goals:

It has worked toward these goals with admirable dedication over the past decades and has been a key player in developing the US aviation marketplace.

But it is still a trade group with the specific interests of its members at heart. As such it represents a diverse group of members, consisting of many US airlines, a varied group, encompassing some new generation airlines like Southwest and JetBlue, which are members of ATA, and Frontier and Spirit, which are not. Meanwhile, all of the legacy carriers are members and have been for a very long time. It is this latter group that especially needs help in polishing its image as several of the airlines continue to underperform and disappoint their customers.

This chart produced by MarketMetrix tells the story eloquently. 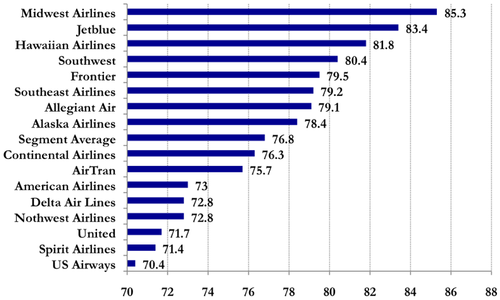 A time for reflection and developing a new platform

The opening paragraphs above, excerpted from the Association’s 2009 Economic Report, tread into areas with considerable room for thoughtful debate, such as…

1. The contention that airlines seek to “exceed customers’ expectations” striving “every day to make better plans.”

It is true that many airline websites make some passing mention of customer satisfaction, but they are also filled with disclaimers that either erode or completely dismiss responsibility in numerous circumstances. Providers dedicated to customer satisfaction rarely generate responses such as the now infamous “United Breaks Guitars”. Nor do firms interested in customer welfare leave passengers stranded on an RJ for six hours in the middle of the night and then dedicate their follow-up efforts to blaming other parties involved in the debacle.

Furthermore, these are just some of the most recent examples of behavior and attitude that have been repeatedly displayed, with little evident improvement. In response to recent events, the Business Travel Coalition, a group focusing specifically on the care and feeding of business travelers, has changed its stance with regards to legislation concerning on-ground confinement. Their previous opposition to legislated solutions has now turned to support for such mandates since the majority of airlines seem either unable or unwilling to “make better plans”.

Customer service, if defined by on-time operations, has indeed improved but that is far more due to the airlines’ reduction of flights than it is to a concerted effort to operate more punctually.

2. The idea that we are now spared from “waits with airline reservation agents; piecing together multiple tickets on multiple airlines; standing in long lines to check and recheck bags” is a rather interesting interpretation of reality.

First the good news: No one can or should diminish the astonishing choice and flexibility that is provided by online booking. The Internet has made it possible to compare both fares and services in ways that were unavailable until its emergence. But, for consumers unable, for whatever reason, to use that channel, live booking “services” have been monetized by most carriers and now come with a fee. This “boon” for the consumer has actually been far more beneficial to the providers who can process online booking transactions for a fraction of their previous cost and generate revenue from those “live” passengers who previously were served for free.

And you have to be pretty old to remember the days when itineraries were patched together on multiple tickets. Interline agreements were standard in the industry for many years prior to deregulation, allowing multiple carriers to be used according to agreed revenue shares. This, of course, has been superseded by the alliance-based, hub-and-spoke networks that allow for similar (and often less expensive) itineraries to be constructed. However, stepping outside the network or alliance effectively destroys that system and its advantages. Furthermore, as was shown by the series on US hub dominance, “choice” is an ethereal concept in many fortress hub cities.

And baggage. The process may indeed be changed but in most cases for the worse. Lines still exist, many still being quite daunting, but with the added “advantage?” of being charged for the transaction when it finally takes place. Lower fees are possible by booking bags online in advance, but this is an added task for the traveler and a new revenue source for the carrier. Lines are never fun, but lines that now end in additional cost fail to strike me as a vast consumer improvement. Furthermore, though luggage charges have added to airline revenue, the conditions of carriage have not been amended by the carriers so as to provide better baggage service or coverage for the new fees being charged. If the equation is changed to the financial disadvantage of the passenger, perhaps it is time to reassess the legal relationship too?

3. There is no doubt that the aviation infrastructure is inadequate for the traffic it is required to accommodate. While satellites bring mobile boarding passes to our electronic gear, the aircraft in which we fly are monitored and controlled by technology that would be familiar to many who lived 50 years ago.

Not only in the US, but also across the globe, governments and other regulators have failed to create systems that can benefit all stakeholders. Governments are all too ready to pass the buck to (and penalise) the airlines when there are delays, when more often than not the cause is infrastructure-related. But the airlines are not entirely without blame. Irrational scheduling almost invariably contributes too.

Chart 1 records the Delta departures from Atlanta between the hours of 1700-1759 on most days.

Source: OAG
Not all flights are daily

Atlanta is a big airport and one that has had the benefit of recent and ongoing infrastructure improvements, including one of the few new runways to be built in the US in decades. Nonetheless, there are 66 Delta (or DL commuter) aircraft scheduled to depart in that one hour. And even though Delta represents almost ¾ of Atlanta’s traffic, there are other operators departing, as well as a steady flow of arriving flights.

Even with vastly updated equipment, 12 aircraft cannot all depart at 1705 and operate with optimal scheduling. Either some (or even all) will encounter delay or the schedules will have to be adapted to allow for extended taxi and wait times.

The hourly capacity of Atlanta is stated to be about 134 arrivals and 120 departures in good weather. So the schedule is operable. However, in inclement weather that operational capacity drops to about 100 total movements and therein lies the potential for a mess, absent 365 days of clear skies.

And Atlanta is a best case example, far more able to deal with concentrated operations than many other US airports which operate with fewer runways, less space and in more congested areas. Airlines, most affected by delays and congestion, are also primary culprits in its continued existence.

Fares may be down, but prices have risen steeply lately

The ATA makes note of the fact that the cost of air travel remains a bargain when compared with many other goods and services. This is true. As one example, relatively flat airfares, coupled with annual double-digit increases in US health care cost has actually helped to create a growing market for medical treatment travel. Though the experience of air travel may have been diminished, its affordability, coupled with safety, is undeniable.

Unfortunately, however, the past few years have brought changes in costs that are not always transparent. A chart on page 14 of the ATA report compares average one-way ticket prices in the top 40 US markets and shows an overall increase averaging 8.9% but with many markets actually experiencing price declines.

The numbers presented include government taxes and fees but do not account for the numerous and varied ancillary charges that now are a reality for many travelers. For instance, the average fare between San Francisco and New York declined by 4.9%, from USD292.00 (2007) to USD272.60 (2008). But, book that ticket with a live agent, check two bags and buy a snack and it will not be hard to spend another USD80-100.

So two things are fact. First, air travel remains affordable, especially when compared to other purchases in our lives. But the true cost of a journey is much more difficult to ascertain than was the case when the ticket price was also the journey price. Most airlines have gotten quite proficient at “gottcha!”

So, kudos to the ATA and its efforts to create a safer and more functional US marketplace. Its efforts benefit millions of travelers. But, the ATA is pushing just a bit too hard in its efforts to make the current service environment seem customer friendly. As seen from the survey graph, consumers have a different view and no amount of industry-friendly PR is able to alter the unfavorable impressions held by the traveling public.

And, more importantly, hopefully the member airlines’ managements do not share the apparent complacency of the ATA report; otherwise they are in REAL trouble.