Significant start-up costs for its new United Express operation, rising labour costs and penalties for irregular operations during the winter snowstorms conspired to widen the losses experienced by ExpressJet Holdings during the first quarter as it posted a loss of USD16.1 million, up 41.1% from the year-ago period. 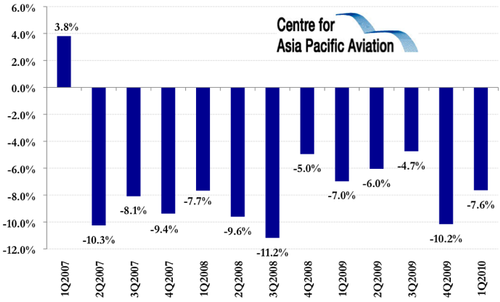 The rising costs set the tone for the tenure of newly installed CEO Thomas Hanley, just a week on the job, who said he will be taking the immediate period to assess each cost centre before developing a battle plan to turn the company’s fortunes around. In the meantime, while revenues are rising, costs still outpace revenues putting the company in a precarious position, given its complete reliance on 50-seat regional jets.

For the first quarter, CFO Phung Ngo-Burn reported that the severe February weather cost the airlines USD3 million in the quarter from cancellations as well as the expenses from repositioning crews and system recovery. She noted that the quarter held a USD1.8 million payment to Continental, some USD1.3 million of which was for an increase in block hours or a utilisation improvement with the balance being performance penalties.

The Continental payment is, essentially, a payment made to Continental for increased utilisation, according to the company. “Continental paid us for lower utilisation under the first amendment to the Continental CPA,” said Spokesperson Kristy Nicholas. “The total of payments Continental made to us are approximately USD9 million and as Continental increases utilisation, it flips the other way and we pay them, up to USD10 million. We paid USD1.3 million in 1Q-2010 and USD1.2 million in 4Q-2009. So we have USD7.5 million remaining that we expect to pay through 2011.”

She also outlined USD1.5 million in start up costs for United Express operations during the quarter with a like expense expected for the second quarter as another 10 aircraft are added to the United Express fleet. The costs in the first quarter included aircraft painting and modifications as well as crew positioning costs.

“Long term, we expect improvement in the financial performance in the United program which will reflect the temporary markup discount, the starting costs and staffing the O’Hare base,” she said. The company no longer discusses its margin results owing to confidentiality agreements with its partners.

The company was hit by a major variance in wages, salaries and benefits as well as maintenance, materials, repairs, fuel and aircraft rent. The fuel and aircraft rent as well as maintenance are pass-through items to United, but labour costs rose 14.5% owing to a new labour contract effective in 2009. However, the company won productivity gains in the new contract and hopes that will begin kicking in coming quarters this year.

Interim CEO Pat Kelly further explained that the company’s high attrition rate has stalled with the economy, forcing up seniority with resulting significant increase in compensation and benefits which are growing at a much faster rate. “Year on year wages, salaries and benefits are growing at 14% while block hours are only increasing by 12%,” he said. “The combination results in margin pressure and we must plan for that to continue.”

Ngo-Burn also reported that its charter division – Corporate Aviation – earned less revenue as aircraft were transitioned out for the United Express operation, which rises from 22 aircraft now to 32 aircraft beginning 1-May-2010. The remaining six charter aircraft are expected to gain improved revenue production as a result, she said.

Kelly reported the company was getting positive feedback from United on the start up as well as operations.

On the balance sheet he reported significant progress, using a USD16.5 million federal tax refund to repurchase 8.6 million in outstanding convertible debt. He noted the company is left with USD43.6 million remaining with only USD1.8 million left in its security repurchase program. For that reason, the Express Jet board authorized an additional USD20 million be added to the repurchase program for a total of USD21.8 million. “Our plan is to continue working down the balance of the convertible debt aggressively and to make significant progress well before the Aug-2011 put date,” he said.

One analyst seemed impatient for resolving the convertible notes and, in fact, seemed anxious to see the company close. Jon Evans of Edmunds White Partners reminded the three executives on the conference call that the company expected to be cash-flow positive this year.

“If you have USD106 million or USD107 million [in cash, cash equivalents and short-term investments at the end of the quarter], you got USD43 million in debt,” he said, pointing to the new USD20 million authorisation for purchasing the notes. “You are paying 11+% interest on it. Why wouldn't you call them if you think you're going to be cash flow positive? Because it seems like you are going to have plenty of cash? It seems like the bonds out there are putting pressure on your stock. You guys could pay off the bonds and close the company down, sell off the spare parts and I would get more money for my equity than it's worth right now. So I kind of wish you would close.”

Kelly responded by saying some of the cash was restricted for future liabilities related to workers compensation. He also indicated that it was just how they were managing their money for this year’s operations.

Evans also asked if the proposed United-Continental merger would impact the company and CEO Tom Hanley said no, the contracts survived any merger or change of control. However, they can’t be too sanguine about this since the United deal was a short-term stop gap measure with only hopes of growing into something bigger. The 10 aircraft being put on line in May will be removed in December.

In addition ExpressJet has been struggling for several years as Continental forced the amendment to its contract dramatically reducing the number of aircraft ExpressJet flew in the Continental Express fleet. Since then, ExpressJet tried a low-cost, point to point service using the aircraft it continued leasing from Continental that were no longer needed for Express operations. That failed on the spike in fuel costs in 2008, despite good customer response to the new service. Now, its charter services, the other use for the aircraft leased from Continental, is shrinking.

In addition, with legacies downsizing their regional airline fleets, especially for 50-seat jets, the economics of which have completely changed with both 2008 and current oil prices, the prospects for ExpressJet remain challenging, given the fact that all it has in its fleet are 50-seaters. With its current financial performance there seems little room to re-equip its fleet. Even mighty SkyWest Airlines is facing these same challenges albeit not on the same scale as that facing ExpressJet.

Kelly also expressed frustration that despite block hour growth, the company is still posting losses and widening those losses from both 4Q-2009 and 1Q-2009. “We know we have some factors that depressed the first quarter results but they should end and allow better results for the future,” he said, hopefully, noting April was significantly better than March.

He also pointed to the expiration of the temporary markup discounts in the United Express agreement are expiring in the second quarter which will make its results better still. As part of the deal, ExpressJet agreed to a margin waiver for them from 1-Dec-2009 through the 2Q-2010. Finally, the United Express start up costs will end in the second quarter as well, although the Continental incentive payments will continue until they expire in 2011 when the USD10 million cap is reached.

Even if you adjust the numbers,” he said, “for all those factors the results are not satisfactory. “The phenomena we face is a margin squeeze play driven on the one hand by low inflation rates as a result of poor economy which affects revenues, and, on the other hand, by contractual increases in labour and select vendor agreements as well as increases in our average seniority which are all effecting us on cost side. The margin squeeze is most pronounced on Continental agreement and, while we have diversified, it still represents three fourths of our revenue. That contract allows us to increase block-hour revenue by changes in the CPI. Last year, we increased rates by 1.9% but this year, the increase will be lower at 1% based on the CPI trends.”

"Our employees did a great job of operating the airline in light of the severe weather conditions of the first quarter," said Kelly. "Unfortunately, our financial results were disappointing. It is clear now that to return to sustained profitability, we need to reduce our costs further.”

Having achieved a major milestone in diversifying its partnership beyond Continental Airlines, the company reported that it continues to expand its United Express operations. During the quarter, it flew an average of 16 aircraft, producing 14,432 block hours or average daily utilisation of 9 hours and 54 minutes per day. Within the United Express operation, ExpressJet flew 197,244 ASMs, generating 138,832 RPMs and experienced a load factor of 70.4%.

Under its capacity purchase agreement with Continental Airlines, ExpressJet flew 162,823 block hours using an average of 208 aircraft. The year-over-year improvement in block hours led to ExpressJet aircraft utilisation to a 6.2% year-on-year improvement to 8 hours and 41 minutes per day. In first quarter 2010, ExpressJet generated 1.9 million RPMs on 2.5 million ASMs, producing a load factor of 76% within its Continental Express operation. 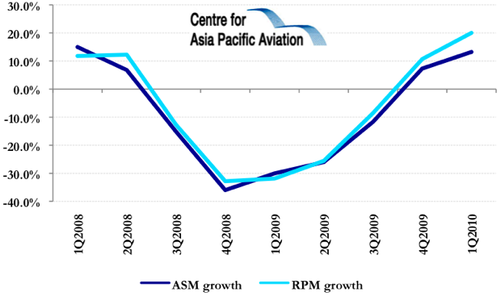 Within Partner Flying, ExpressJet expects utilisation to continue improving as the economy recovers and it heads into the seasonally stronger second and third quarters.

ExpressJet is shrinking its charter business from the 30 aircraft flown in 2009 to six for the remainder of 2010 as it grows its United Express operation. Corporate Aviation flew 3,027 block hours during the first quarter with an average of 20 aircraft, 6.3% fewer than first quarter 2009. ExpressJet expects the resizing of the Corporate Aviation fleet will enhance the revenue production per charter aircraft on a go-forward basis.

During the quarter, ExpressJet added one additional ground handling station, for a total of 42 contracts at 31 stations, the company reported. Total activity during the quarter as measured by aircraft turns was 18,512.

Consolidated operations resulted in ExpressJet operating a total of 244 aircraft during first quarter. It expects its 2010 fleet plan from May to December 2010 to consist of 244 fifty-seat aircraft including 206 operated for Continental, 32 for United and six at Corporate Aviation

The increased utilisation and new flying in its Express operations for its two partners were the principal drivers in expanding revenues during the quarter rising from USD169.7 million in 1Q2009 to USD189.3 million generated during 1Q-2010.

After accounting for the repurchase, ExpressJet's balance on its 11.25% Secured Convertible Notes due 2023 is USD43.6 million due noteholders when the notes become due August 1, 2023. It also represents 26.1% reduction in the principal balance from first quarter 2009. Following the release of approximately USD98.5 million of collateral in December 2009 by the trustee under the indenture governing the notes, the required collateral under the remaining notes is USD32.8 million in spare parts and USD28.8 million in spare engines.

Capital expenditures during the quarter totaled approximately USD0.9 million compared to USD1.3 million during first quarter 2009. ExpressJet expects remaining capital expenditures for the year to range from USD8 million to USD10 million to meet operational requirements, including those required to support flying as United Express.