In China, the Shanghai Composite Index fell the most since Jun-2008 on 31-Aug-09 (-6.7%) and is now down by more than 20% from this year’s high on 04-Aug-09, on concerns that a slowdown in lending growth may derail a recovery in the world’s third-largest economy.

China Southern Airlines fell 7.9% yesterday, the most in six months in Shanghai trading, reflecting the overall market slump and the reaction to the carrier’s worse-than-expected 1H2009 profit slump of 97%. The shares declined 3.9% in Hong Kong trading. Other Chinese carriers were also weaker yesterday, with Shanghai Airlines, Hainan Airlines and China Eastern down 4.3%, 4.0% and 3.6%, respectively.

China Eastern Airlines’ share price fall came as the carrier received CAAC approval for its acquisition of Shanghai Airlines. While the merger still requires the approval of both carriers' shareholders, China Eastern has already commenced the merger process and expects the transaction to be completed by year-end. The carrier plans to integrate services for the Winter-Spring schedule, which commences in Nov-2009.

Also in North Asia, ANA shares fell 1.0% yesterday. The carrier’s President, Shinichiro Ito, stated that a rebound in sales would help the carrier achieve its annual profit target following the largest reduction in international passengers in six years. According to Mr Ito,  “economy-class demand is back to year-ago levels, but demand for business trips is still lower. We still have time and aim to make our profit target through sales alone”.

In the Indian market, Kingfisher Airlines' shares gained 1.1% on the same day that the carrier informed the Bombay Stock Exchange that its Board of Directors passed a resolution for an additional fund raising through various instruments including GDRs of up to USD100 million (subject to the approval of shareholders). It was also decided to seek the approval of shareholders for an increase in authorised share capital of the carrier from USD102 million to USD205 million.

Elsewhere, Qantas and Singapore Airlines shares were down, by 1.2% and 3.0%, respectively, with Cathay Pacific slipping 0.7%. 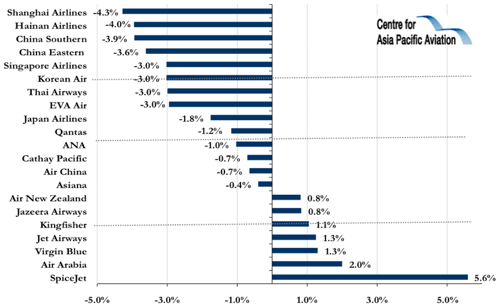