Taiwan’s EVA Air is entering a new phase as it launches Houston on 19-Jun-2015. Houston is EVA’s first new long-haul destination in five years and is part of a major push in the North American market that also includes the anticipated launch of services to Chicago in 2016.

To support growth in Southeast Asia, EVA is pursuing modest expansion of its A330 fleet that will provide interim capacity prior to the delivery of new-generation A350s or 787s. EVA plans to place orders for at least 20 A350s or 787s by the end of 2015.

EVA’s long-haul fleet currently consists of 24 aircraft, including 21 777-300ERs and three 747-400s. Houston will be EVA’s 11th long-haul destination and fifth destination in the US.

London and Vienna are served via Bangkok while the other eight existing destinations are all served non-stop. Vienna is a bit of an anomaly as it is served with A330-200s, a type EVA otherwise uses on medium-haul routes within Asia-Pacific including Guam, which is technically a US territory but not considered a long-haul destination as it is only four hours from Taipei.

Houston will also be served non-stop and will become EVA’s longest long-haul flight with a block time of 15 hours and 40 minutes on the westbound leg. EVA initially unveiled plans in late 2014 to add Houston in 2015 and Chicago in 2016. EVA has not confirmed Chicago or set a launch date but still anticipates serving the route.

EVA will easily have the capacity to launch Chicago in 2016 as well as add frequencies to Houston and potentially other existing North American destinations. EVA Air president Austin Cheng told CAPA at the 8-Jun-2015 IATA annual general meeting in Miami that the airline is slated to take seven additional 777-300ERs in 2016. EVA is also taking two more 777-300ERs in 2H2015 and is now committed to take two 777-300ERs in 2017, giving it a fleet of 32 777-300ERs.

The 777-300ER is already the backbone of EVA’s operation, accounting for 35% of EVA’s total seats and 65% of its ASKs. The portion of capacity flown by the 777-300ER will increase further as EVA adds another 11 777-300ERs and phases out the 747-400 passenger aircraft. (EVA plans to continue operating 747-400 freighters but has committed to acquiring five 777Fs, further raising the profile of the 777 in its overall fleet.) 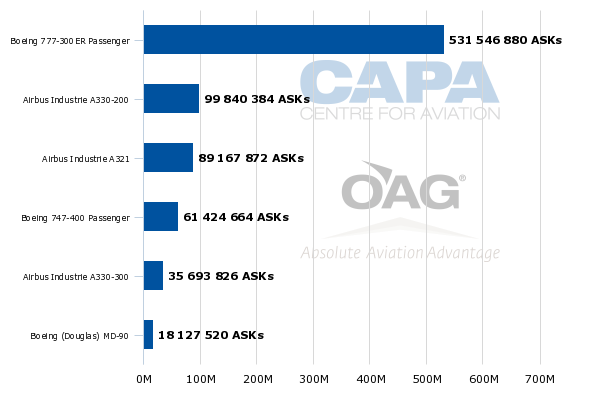 EVA is approaching another milestone as Jul-2015 marks the 10th anniversary of its 777-300ER operation. EVA took its first 777-300ER in Jul-2005, or only about a year after the type entered service. EVA has since been quietly building up its 777-300ER fleet and is now the eighth largest 777-300ER operator, according to the CAPA Fleet Database.

EVA is phasing out its three remaining 747-400 passenger aircraft, which are now used to operate its four weekly flights to Vancouver and three of its seven weekly frequencies to Seattle. As a result eight of the 11 777-300ERs EVA is taking over the next two years will be for growth.

As EVA is not planning any expansion in Europe, it will be able to pursue further growth in North America. In addition to launching Chicago, EVA expects to add capacity to Houston in 2016 and will likely add flights to Toronto and Vancouver. With the recent upgrade of Seattle to daily, Toronto, Vancouver and Houston are EVA’s only North American destinations served less than daily. Toronto and Vancouver are each currently served with four weekly 777-300ER frequencies.

Houston is initially launching on 19-Jun-2015 with three weekly flights but EVA is adding a fourth weekly flight in Jul-2015. Mr Cheng said EVA will increase Houston to six weekly flights in 2016 and is targeting a daily service. The seventh frequency could potentially be added by the end of 2016.

EVA is showing confidence in the Houston market despite the downturn in the energy sector, which has impacted long-haul demand for business travel to and from Houston. But EVA is mainly targeting leisure and ethnic traffic.

Mr Cheng points out Houston has a large ethnic Asian population, in particular Filipinos and Vietnamese. For the Houston market EVA expects connections beyond Taipei will account for significantly more than the 50% of total traffic. Mr Cheng said Houston should have a similar transit traffic ratio as Seattle and Toronto, where more than half of the passengers currently connect beyond Taipei.

In EVA’s other North American markets transit traffic beyond Taipei currently accounts for about half of all passengers. Los Angeles and San Francisco are particular popular local markets from Taipei.

EVA currently operates 19 weekly flights to Los Angeles and 14 frequencies to San Francisco, making them by far its largest markets based on weekly ASKs. Houston will immediately become EVA’s 10th largest route based on ASKs, boosted by its exceptionally long length. 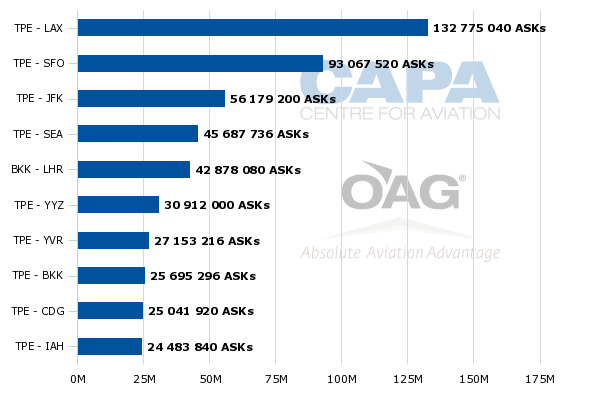 Ho Chi Minh is currently served with two daily flights while Taipei-Bangkok is served with 17 weekly flights. But Bangkok is an anomaly because 11 of the 17 frequencies continue onto Europe, including seven to London Heathrow and four to Vienna.

Bali, Jakarta, Kuala Lumpur, Manila, Phnom Penh and Singapore are all served with one daily flight each. Hanoi is served with five weekly flights and Surabaya with only three weekly flights. Almost all these flights are timed to connect with flights to and from North America. 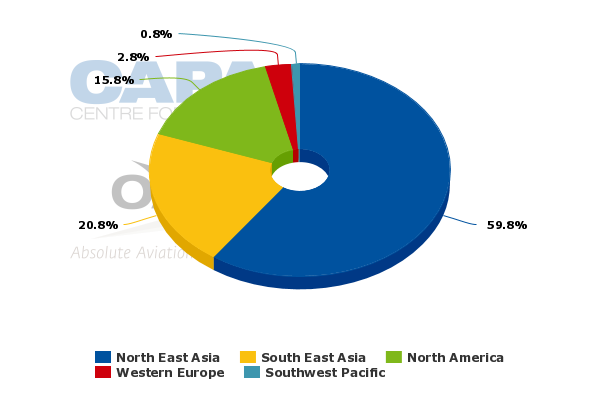 EVA will add a second bank of flights to North America

New afternoon departures will particularly be easy to introduce to Los Angeles and San Francisco as their markets are already served with multiple frequencies. But EVA could also potentially start to serve some of its other North American markets with earlier flights as it will start to introduce morning services from the key Southeast Asian connecting markets. Most of EVA’s Southeast Asian flights now leave in the afternoon, landing in Taipei in the evening for quick connections to North America.

EVA is planning to expand its fleet of medium-haul widebody aircraft to support the planned boost in frequencies across its Southeast Asian network. According to the CAPA Fleet Database, EVA currently operates 14 A330s (11 A330-200s and three A330-300s) and has a commitment for two additional A330-300s from leasing company Intrepid Aviation which are slated to be delivered in late 2015.

On 16-Jun-2015 EVA and Airbus announced at the Paris Air Show a commitment for four additional A330-300s. EVA plans to take delivery of these aircraft in the relatively short term, enabling it to expand its operation to Southeast Asia.

EVA currently has an all-widebody schedule on seven of its 10 Southeast Asian destinations, according to OAG data. Hanoi and Phnom Penh are currently served with A321s while some frequencies to Kuala Lumpur also use A321s.

The additional A330s are a temporary solution to support medium-haul growth as EVA is currently evaluating new-generation widebody aircraft. Mr Cheng told CAPA that EVA plans to select between the A350 and 787-10 by the end of 2015 and has a requirement for 20+ aircraft.

EVA is looking at deliveries from 2018, which is when the 787-10 enters service. EVA does not believe it needs a smaller widebody aircraft such as the already in-service 787-8 or 787-9. EVA instead expects to use A321s and potentially the longer-range A321neo for thinner medium-haul routes.

EVA currently operates 15 A321s, which are mainly used for thinner short-haul markets within North Asia while widebodies are used in most of the main markets. EVA is continuing to expand its A321 fleet but the main focus is on expanding in the fast-growing Taiwan-Japan market and to secondary cities in mainland China as the cross-Straits market continues to open up.

EVA could use A350s or 787s to expand in Australia

The A350s or 787s will replace EVA’s fleet of A330s while enabling some growth. While the new type will primarily be used within Asia-Pacific EVA will consider deploying A350s or 787s to European destinations served via Bangkok.

EVA also plans to look at using the A350 or 787 to expand in Australia. EVA currently only operates two weekly flights to Australia, an A330-200 service to Brisbane, but sees potential opportunities to expand in Australia if mainland China lifts current restrictions which prevent Chinese travellers from making a transit stop in Taipei. Taipei is potentially well positioned as a hub for the fast growing outbound China-Australia market.

The 777-300ER is expected to remain the backbone of EVA’s long-haul operation, including North America and non-stops to Europe, for some time. EVA is also further investing in the 777 by introducing 777Fs to its cargo fleet. EVA announced an intent to acquire five 777Fs at the Paris Air Show on 15-Jun-2015.

EVA would benefit from closer relationship with United

Houston will be an interesting test case for EVA. Strong demand for belly cargo and local passengers in the Houston-Southeast Asia market gives EVA reason to be confident and probably explains its decision to quickly boost service on the new route to six weekly flights. But EVA will face tough competition in the Houston-Southeast Asia market against Emirates, Korean Air (KAL), Singapore Airlines (SIA), Qatar Airways and the All Nippon Airways (ANA)/United joint venture.

EVA would clearly benefit from working closely with Star Alliance partner United in Houston, which could potentially provide beyond connections to the southeast US and throughout Latin America. But EVA does not expect a significant volume of transit traffic beyond Houston, including to Latin America.

Currently less than 20% of EVA’s US total traffic connects beyond its US gateways. EVA does not expect this figure to increase as it expands in North America, including to the United hubs of Houston and Chicago, as the focus will remain on connections beyond Taipei rather than connections in the domestic US market. The focus on local US markets that EVA serves with its own metal could be partially driven by the fact it is typically difficult for foreign carriers to secure decently priced domestic feed from US carriers, including carriers in the same global alliance.

EVA is seeking to expand its partnership with United but for now the two carriers have a relatively limited relationship. EVA and United currently only codeshare on United-operated domestic flights but are discussing potentially codesharing on trans-Pacific flights and connections beyond Taipei. United re-entered the Taiwanese market in 2014 with non-stop flights to Taipei from San Francisco.

An EVA-United JV would be a potent combination

A potential joint venture in the Taiwan-US market is also a possibility as EVA and United discuss deepening their partnership. EVA would obviously benefit from a joint venture, boosting local point of sales in the US market as well as opening up improved feed.

A United-EVA combination would account for two-thirds of total capacity in the Taiwan-US non-stop market and could pressure SkyTeam partners China Airlines and Delta Air Lines (which serves Taipei via Tokyo) to forge a similar arrangement. EVA has increased seat capacity to the US by almost 40% over the last two years and now accounts for almost 60% of non-stop seat capacity between Taiwan and the US. 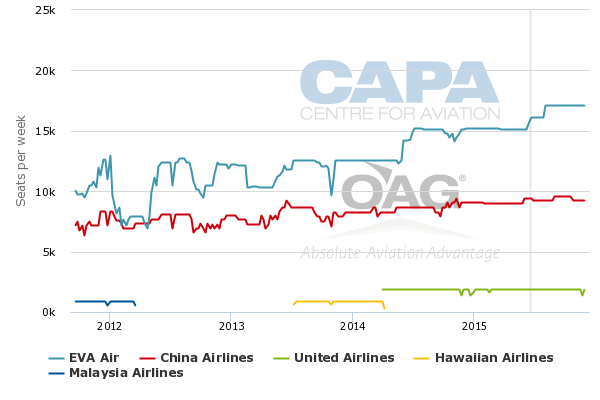 For now EVA will have to rely on its online markets and connections to Southeast Asian as the Taiwanese carrier continues to expand its US operation. But EVA’s outlook in the key US market could improve significantly as a closer relationship with United is pondered and as talks between the Taiwan and China governments continue over potentially lifting current restrictions blocking Chinese travellers from making transit stops in Taipei from China. (Taiwan transits are permitted into China.)

EVA has become the sixth largest Asian airline in the US market, headed by Korean Air, Japan Airlines, Cathay Pacific, ANA and Air China. EVA has achieved this quietly and perhaps too quietly; there is arguably not enough brand recognition.

EVA’s expansion in the US has risks as it comes at a time of intensifying competition over the North Pacific. But EVA has the opportunity to continue carving out a strong position to Southeast Asia market while waiting on China.