Europe's seat capacity is down by 20.3% versus 2019 in the week of 11-Apr-2022. This is 0.5ppts worse than last week and 3.0ppts worse than two weeks ago, but almost back to its level before the Omicron wave and the Russian invasion of Ukraine.

In the week commencing 11-Apr-2022, total European seat capacity is scheduled to be 25.2 million, according to OAG schedules and CAPA seat configurations.

In spite of two weeks of modest declines, Europe is still close to its pre-Omicron level (it reached -18.7% in the final week of Dec-2022).

The modest decline in total capacity as a percentage of 2019 levels this week has been driven by domestic markets. Europe's domestic seats are down by 18.3% versus 2019, which is a deterioration from last week's -15.6%.

Europe is fourth in the ranking of regions measured by seats as a percentage of 2019 levels this week, above Asia Pacific and Middle East.

The Middle East is broadly flat on last week. 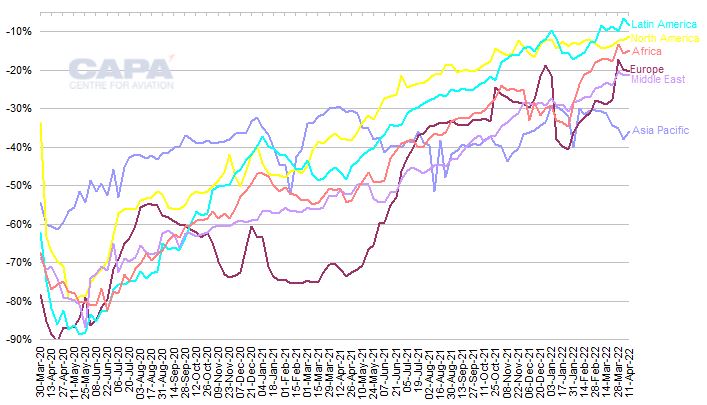 Capacity for 2Q2022 is currently projected at 87.0% of 1Q2019 levels, which is only a modest downward revision from 87.7% a week ago. Even if there are further cuts as the quarter progresses, 2Q should represent another upward step in Europe's capacity recovery.

As noted earlier in this report, Europe's seat capacity as a percentage of 2019 levels is almost back to its pre-Omicron levels.

Nevertheless, the curve did not drop, but more or less flattened before jumping to 83% in the final week of Mar-2022.

This jump coincided with the start of the summer season and was probably a little overoptimistic, particularly in view of the labour shortages suffered by airlines whose staff reported positive COVID tests as capacity grew.

The subsequent easing back of capacity as a percentage of 2019 levels to 80% this week probably represents some fine tuning rather than a significant interruption in the capacity recovery trend in Europe – as demonstrated by the projected 87% for 2Q2022.

Of course, capacity data are not the same as demand data.

Throughout the coronavirus pandemic the trend in passenger numbers has consistently fallen short of seat numbers when expressed as a percentage of the equivalent period of 2019.

Weekly passenger data for Europe's airports were reported by ACI Europe from early in the pandemic until late Oct-2021. Since then, only monthly passenger numbers are available – the most recent being for Feb-2022. 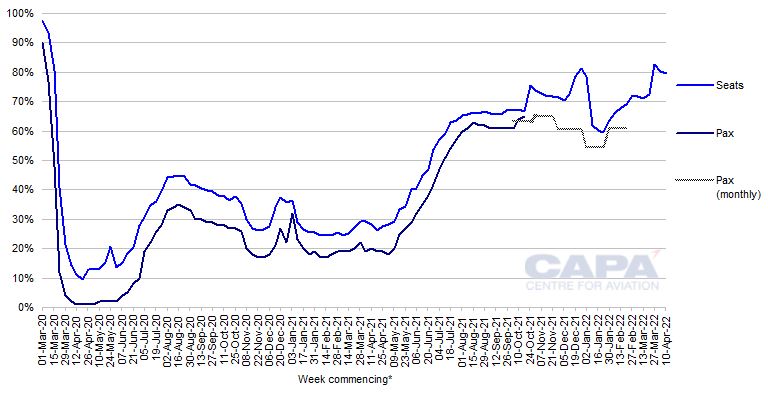 The subsequent increase in seats to an average of 74% in Mar-2022 suggests that passenger numbers should also have resumed their recovery in Mar-2022, although the Russian invasion of Ukraine may have widened the gap between the two curves – even if only on a short term basis.

Data from IATA on global ticket sales to 29-Mar-2022 indicate that international bookings for future travel at any point in time fell as a percentage of 2019 levels in early Mar-2019, but soon recovered and modestly exceeded their late Feb-2022 levels in the second half of Mar-2022.

European aviation is showing its resilience

European aviation's recovery from the COVID-19 pandemic was certainly buffeted by the Omicron wave and the effect on demand of the Russian invasion of Ukraine.

The future remains, as ever, unpredictable. There will be new challenges, including those that are not foreseen.

Nevertheless, the resumption of the recovery trend demonstrates aviation's resilience.