Europe's airlines appear to be following a course to improved profitability, based on the 1H2014 results of the largest publicly quoted airline groups. Profits remain slender in most cases, but margins are improving in aggregate. Individually, financial performance varied widely, with LCCs both leading (Ryanair) and lagging (Norwegian) the operating profit margin rankings in 1H2014.

The European market offers volume growth, but is characterised by price pressure, with RASK falling for the majority of the larger airline groups and this points to the need for additional caution in capacity growth. The LCCs collectively enjoyed higher growth than the FSCs in 1H2014 and also achieved a more stable RASK performance (although not in all cases).

Profit improvement is largely being achieved through cost savings and CASK reduction. Although fuel prices are high on a longer term historic perspective, they are enjoying a period of relative stability and this has helped the cost picture. Although Europe's airline sector remains only thinly profitable, these 1H results hold out the prospect of better full year results in 2014 versus 2013.

A note on our methodology in this analysis

Where possible, we have used reported data for each group for the period Jan to Jun for 2013 and 2014. We have converted to EUR where necessary using average exchange rates for the respective periods. Unit revenue and unit cost data are simply calculated from total revenues and total operating costs at the EBIT level, divided by ASK.

SAS figures for revenues, costs and profit are for the period Nov to Apr. Figures for Ryanair, which has a Mar year end, are calculated from its results for fiscal 4Q (Jan to Mar) and fiscal 1Q (Apr to Jun) and include our estimate of its ASKs, based on reported numbers for passengers and load factor for the months Jan to Jun and average sector length data reported for its FY2013 and FY2014.

In aggregate, the 14 airlines increased ASKs by 6.4% in 1H2014, a little faster than the 5.7% increase reported by IATA for all European airlines, suggesting that there is a gradual process of concentration of market power towards the larger groups.

The 4 LCCs in the sample grew ASKs by 10.4%, while the ten FSC groups' capacity increased by 5.6%. The LCCs accounted for 18% of the combined ASKs of the 14 groups, 11% of the revenues and just 7% of the costs. Note that the results of the LCC subsidiaries of the full service carriers are included in the FSC groups and so these figures understate the overall importance of LCCs in the European market.

Nevertheless, these figures emphasis the disproportionate share of capacity (and traffic) achieved by LCCs relative to their overall cost base.

Revenues were little more than flat, costs just below flat

The combined revenues of the 14 groups was almost flat year on year, growing by just 0.3% to EUR55.3 billion. Their aggregated operating result improved from a loss of EUR223 million in 1H2013 to almost reach breakeven in 1H2014 (an operating loss of EUR17m).

The LCCs in the sample collectively remained profitable, albeit at a lower margin (although it is likely that the inclusion of easyJet would show a more stable collective LCC result, with losses at Norwegian and Pegasus offset by improved profits for Ryanair and easyJet). The collective FSCs' losses narrowed compared with last year.

*All 14 groups
** excluding easyJet, which reports revenues, but not costs and profits for the Jan to Jun period
Source: CAPA - Centre for Aviation, company reports

On a per ASK basis, unit revenue (RASK) fell by 5.8% in aggregate, highlighting the pricing pressure resulting from a very competitive market environment. The modest improvement in profitability (or, more accurately, the reduction in losses) was achieved thanks to a slightly greater reduction in unit cost (CASK), which fell 6.5% in aggregate.

CASK ex fuel fell at a similar rate, -7.0%, and so fuel price changes were not a major factor in the half year.

*All 14 groups
** excluding easyJet, which reports revenues, but not costs and profits for the Jan to Jun period
Note: RASK and CASK calculated by dividing total revenues and operating costs (at the EBIT level before exceptional/non-recurring costs) by total ASKs
Source: CAPA - Centre for Aviation, company reports

Within the 14, both RASK and CASK were fairly stable for the LCCs in aggregate (but not individually). By contrast, the FSC groups collectively felt a 6.1% drop in RASK and cut CASK by 6.6%. For the latter, price pressure in the market means that achieving ongoing cost savings remains a priority.

The LCCs' collective RASK stability, in spite of higher growth in ASKs versus the FSCs, suggests that European consumers continue to value their lower priced product and demand is still absorbing their capacity growth. Nevertheless, this is not universally the case for all LCCs individually.

The aggregated results of the 14 groups hide a wide range of results for individual airline groups. One of the more striking individual data points was Norwegian Air Shuttle's 43.7% increase in ASKs, driven both by growth in the number of seats offered and by increased sector length as the airline pursued its long haul expansion.

Interestingly, and perhaps not surprisingly, Norwegian also had a very heavy fall in RASK of 21.4% (when expressed in EUR; its NOK-reported RASK fell 13%, but the weakening of NOK exacerbated the decline when converted into EUR).

The only airline among the 14 to reduce capacity in 1H2014 was Finnair, with an ASK cut of 1.2%. Most increased ASKs at a single digit rate of growth, but five grew at a double digit rate. All but three suffered a fall in RASK (when expressed in EUR) and there was a broad, but not perfect, inverse correlation between ASK growth and RASK growth.

SAS suffered a 22% fall in EUR-converted RASK (a fall of 19% in SEK terms), although its ASK growth was only 3.4%. This reflects strong price based competition in the Nordic market, with Norwegian's strong capacity growth and the presence of other LCCs being contributory factors. Finnair's RASK fell by 6.7%, more than the average reduction, in spite of its capacity cut, and this again seems to highlight price pressure in the Nordic region.

The Turkey-based airlines Turkish and, in particular, Pegasus also experienced significant reductions in RASK when their figures are converted into EUR. Their TRY-reported figures show RASK increases, but the Turkish currency weakened on average by almost a quarter against the euro in 1H2014 compared with 1H2013.

This meant that their RASK fell in EUR terms, which probably more closely reflects the underlying competitive dynamics of their international markets. Moreover, both increased ASKs at a double digit rate. 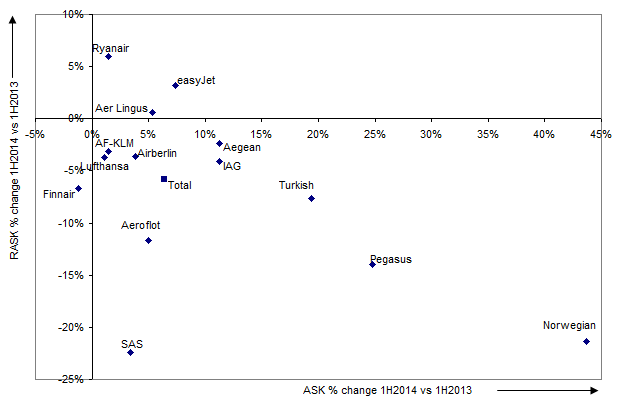 The sample was almost evenly divided between those whose operating margin improved year on year (seven airline groups) and those whose margin deteriorated (six).

Similarly, the number in profit (six) almost matched the number in loss (seven) at the operating level. Ryanair had the highest margin and the biggest year on year improvement in margin, while Norwegian was bottom of the pile on both measures.

In addition to Ryanair, three others also managed both to be profitable and to improve their margin: Aegean, IAG and Lufthansa. Airberlin. Air France-KLM and Aer Lingus made losses, but reduced the margin of loss, while Aeroflot and Turkish were profitable at lower margins than last year. In the category of loss makers that reported deteriorating margins, Norwegian was joined by SAS, Pegasus and Finnair.

Among the seven whose margins improved, only Ryanair and Aer Lingus (just) managed an increase in RASK. For the other five, profit improvement was achieved through cutting CASK more rapidly than their fall in RASK.

All of the six whose margins fell managed to cut CASK, but their problem was that RASK fell more heavily. 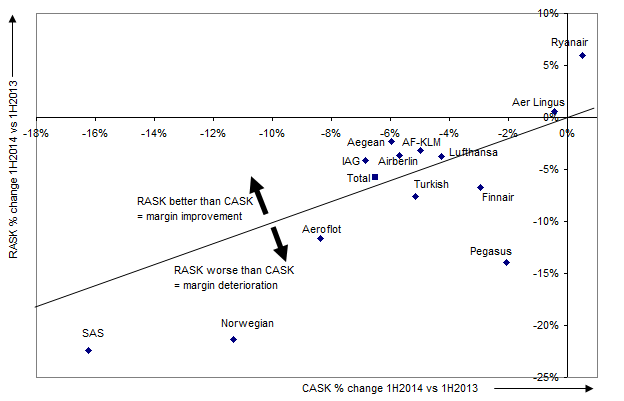 *RASK and CASK calculated by dividing total revenues and operating costs (at the EBIT level before exceptional/non-recurring costs) by total ASKs. Expressed in EUR and converted from local currencies where necessary
Source: CAPA - Centre for Aviation, company reports

Loss making airlines were mostly the smaller ones

There does not appear to be a very clear correlation between operating profit margins achieved in 1H2014 and airline group size, as measured by revenues, but six of the seven loss-makers had revenues in the bottom half of the sample. In other words, size does seem to have helped, although this is clearly not a simple recipe for success. 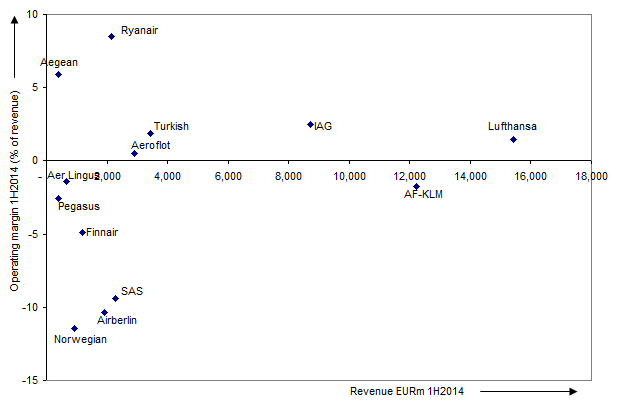 An improved FY2014 result is on the cards for Europe's airlines

Although this would see it keep its position as the world's second least profitable region (and without getting too distracted by the differences between operating profit and net profit), the 1H2014 results of our sample of 14 of the larger European airline groups suggests that an improved FY2014 result is on the cards.

In particular, there is a reasonable degree of confidence that the major groups with listed shares can report higher profits than last year.

However, the losses of the smaller airlines, which are often not publicly reported, are a wildcard that may drag down the collective result for all European airlines. In addition, demand for air travel is always susceptible to unforeseen events and the geopolitical backdrop in Ukraine and the Middle East are examples of situations that could weigh on demand in 2H2014.

In a market that continues to be characterised by downward pressure on unit revenues, continued cost reduction will be vital to improving the profitability of Europe's airlines.