In the week commencing 1-Jun-2020, seat numbers in Europe have dropped by 31.8% from last week, according to schedules from OAG combined with CAPA Fleet Database seat configurations.

Europe is the only region with lower capacity than last week and has returned to its position as the region with the deepest year-on-year cuts, after rising from the bottom of the pile two weeks ago.

Adjusting for a false start in Ryanair capacity showing in schedules data filed with OAG between mid April and late May, this week looks like the true start of the (still cautious) upturn for Europe.

Total European seat capacity is scheduled to be 4.9 million in the week of 1-Jun-2020.

This is a 31.8% decrease week-on-week and 86.3% below the 35.4 million seats of the equivalent week a year ago, according to the data from OAG/CAPA.

This is the 11th week of very heavy double digit percentage (more than 50%) declines in seats and marks a reversal of an upward trend that had broadly persisted since the capacity decline bottomed out at 90.4% in the week of 27-Apr-2020.

Europe has returned to having the deepest cut among world regions

Europe is the only region with lower capacity than last week and has returned to its position as the region with the deepest year-on-year cuts.

Latin America had taken over this position for two weeks, but Latin America capacity is now down by 83.5%, taking it above Europe in year-on-year growth. 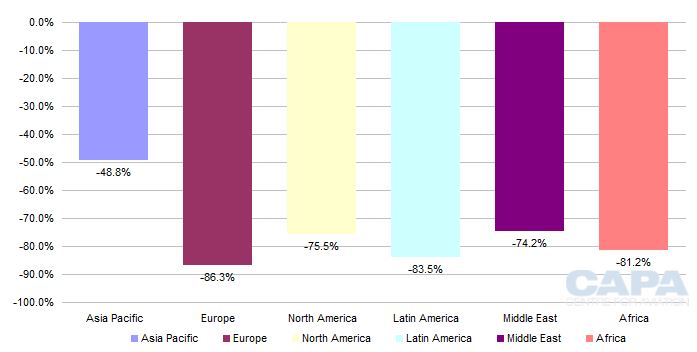 Europe's rate of year-on-year decline had been on the clearest upward curve among world regions for three weeks, but this has now turned down again.

Asia Pacific seat capacity has returned to its upward trend this week, after a dip last week. North America is also now on an upward curve, while the Middle East has taken the sharpest upward movement this week after more than doubling seat numbers week-on-week.

Africa's rate of year-on-year seat decline has widened a little this week and it is now at its deepest percentage change since the crisis began (in year-on-year terms, although it has grown by 1.5% week-on-week).

Year-on-year percentage change in passenger seat capacity by region: week of 30-Mar-2020 to week of 1-Jun-2020 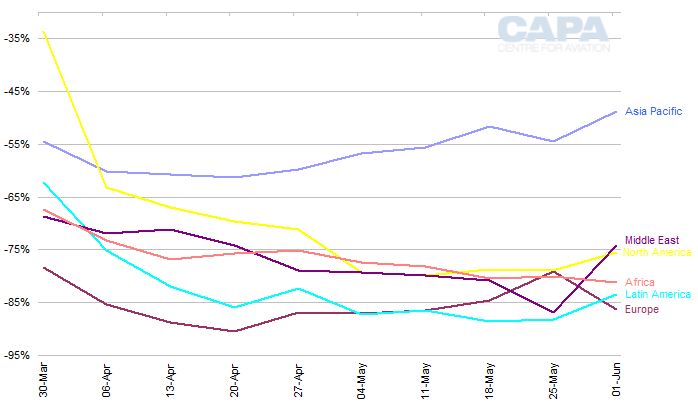 The U-shaped recovery has widened again

As expected, the upward arm of the U-shaped recovery depicted by schedules data continues to widen across the summer season.

Capacity for Jun-2020 is now projected to be down by 71% year-on-year, compared with a 50% decline anticipated last week. The outlook for Jun-2020 capacity implied by filed schedules data has fallen by 61% over the past three weeks and by 42% since last week.

Nevertheless, it still has scope to fall further, based on capacity levels announced by leading European airlines.

Projected capacity for Jul-2020 has fallen by 8% compared with last week's schedules data and is now expected to be 17% below Jul-2019 levels.

Projected capacity for Aug-2020 has been trimmed by 8% since last week and is projected to be 12% below last year's levels, while Sep-2020 seat numbers are still expected to be within 4% of Sep-2019 levels.

There is clearly still significant scope for further reductions to schedules filed for these peak summer months. 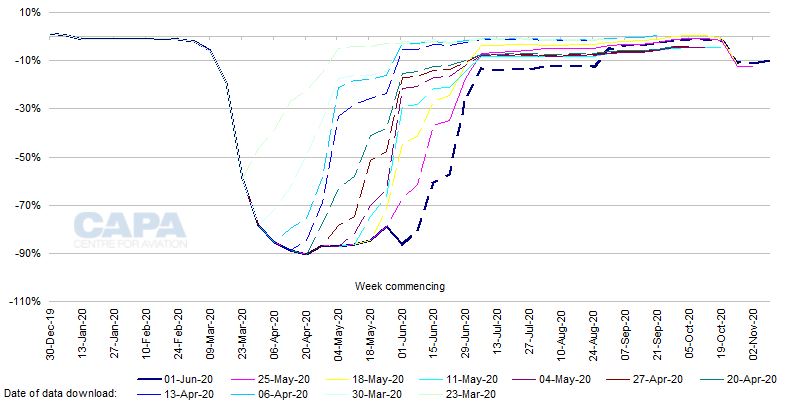 Adjusting for a false recovery in Ryanair capacity, this week looks like the true start of the upturn for Europe

As CAPA's analysis reports on European airline capacity during the crisis have frequently noted, the schedules data filed with OAG need to be taken with a large pinch of salt. Schedules may be filed by airlines as a kind of place marker to keep options open.

The apparent downturn in the year-on-year growth curve this week is likely an illusion.

Data for Ryanair Group fell to zero capacity in early Apr-2020, but have shown an apparent sharp recovery since then, culminating in a level almost matching last year's seat numbers last week (the week of 25-May-2020).

However, Ryanair's fleet has remained almost entirely grounded and it is operating less than 1% of its programme in the Apr-2020 to Jun-2020 quarter. OAG schedules data, combined with CAPA seat data, now indicate less than 1% of its 2019 seat capacity for the week of 1-Jun-2020, bringing this data set closer to reality. 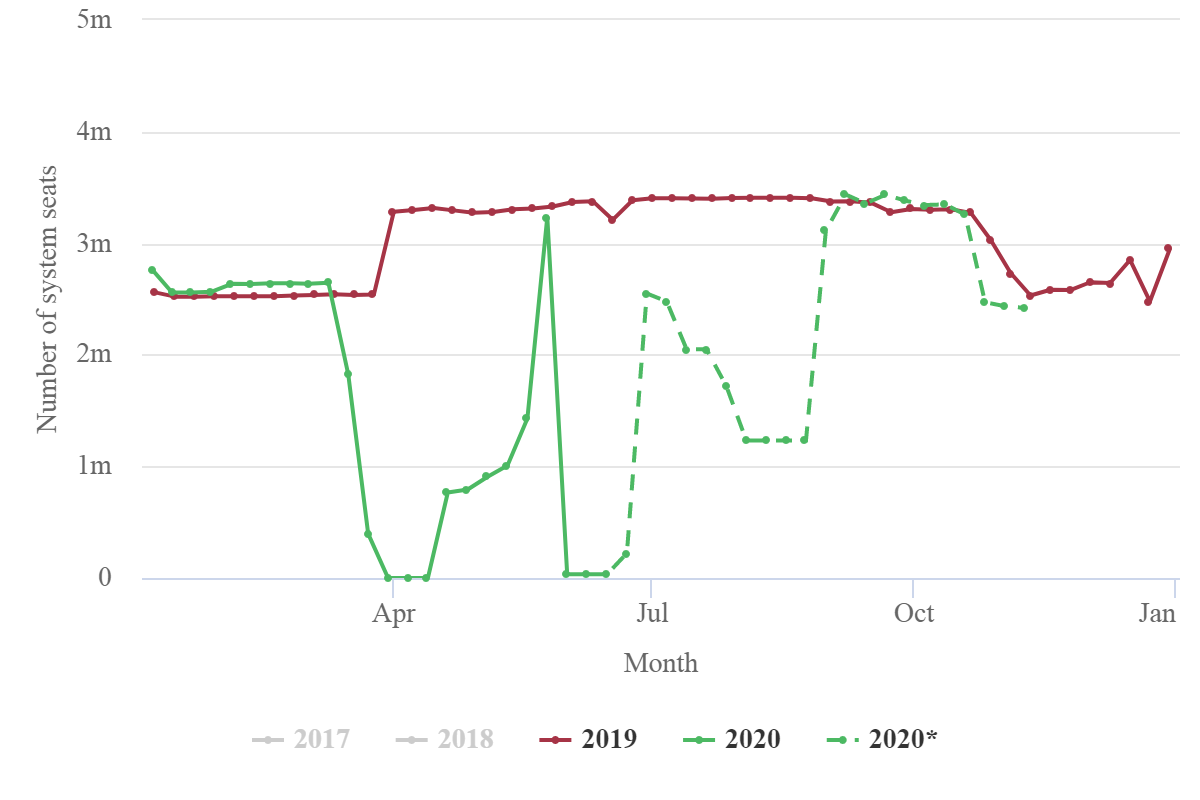 * These values are at least partly predictive up to 6 months from 01-Jun-2020 and may be subject to change.
Source: CAPA - Centre for Aviation, OAG.

Without the distortion created by this false spike in Ryanair data, the U shape in the curve of year-on-year percentage changes in Europe's seat capacity would look flatter and smoother at the bottom.

Adjusting the Europe capacity data to correct for this, total seat numbers were down by close to 90% year-on-year from mid Apr-2020 to late May-2020.

This means that this week's decline of 86% is in fact a modest improvement, and may mark the true start of the recovery.