After four weeks of stagnation at approximately 45% of 2019 capacity levels, seat numbers in Europe slid back to 42% in the week commencing 31-Aug-2020.

The year-on-year cut of -57.8% in Europe's airline seat numbers was deeper than the -55.2% drop of the week of 24-Aug-2020. This was the second consecutive downward movement after 11 positive weeks, but while the previous week's slip was only fractional, the current capacity is down by 6.5% w-o-w.

The volatility surrounding European nations' international travel restrictions is weighing on the recovery.

Wizz Air has followed Ryanair in announcing lower capacity than previously planned this autumn, but LCCs are generally still ahead of the competition. Aeroflot's LCC subsidiary has even managed year-on-year growth in passenger numbers for Jul-2020, demonstrating the importance of a large domestic market and low costs.

Total European seat capacity is scheduled to be 15.6 million in the week of 31-Aug-2020, according to schedules from OAG combined with CAPA Fleet Database seat configurations.

This week's total is split between 5.9 million domestic seats, versus 8.4 million last year; and 9.6 million international seats, versus 28.5 million.

Europe's domestic seats are down by 29.5% year-on-year, compared with last week's -27.0%. This was another downward step from last week, but still the 10th week running with domestic capacity at more than 50% of last year's.

International seats are down by 66.2%, a downward step from last week's -63.2% following four weeks when international capacity had been a year-on-year rate of reduction of approximately 63%.

Both international and domestic capacity fell week-on-week – the first time both have fallen since the early period of the crisis. Domestic seat numbers fell by 1.9%, their first week-on-week decline since early Jun-2020. International capacity dropped more rapidly, by 9.2% week-on-week.

The 57.8% year-on-year cut in total seats this week is the 24th week of very heavy double digit percentage (more than 50%) declines in seats.

It is 2.7ppts wider than last week's 55.2% drop, and the second week of deepening cuts after 11 previous weeks of narrowing year-on-year percentage cuts.

Europe still has the third deepest cut among the regions; Africa now has the deepest

Africa now has the deepest cut, with a reduction of 66.9% year-on-year, taking over from Latin America, where seats are down by 64.7%.

Asia Pacific has now had eight consecutive weeks at more than 50% of last year's capacity. 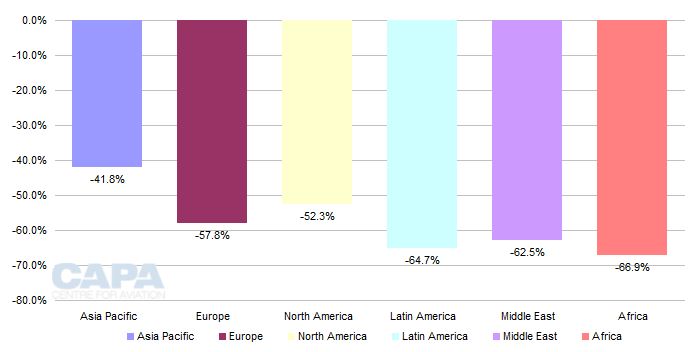 Europe has the clearest downward step this week, while Middle East and Latin America trend upwards

Asia Pacific, North America and Africa are broadly continuing the trend of year-on-year rates of capacity reduction levelling out.

Middle East and Latin America take more noticeable upward steps this week, while Europe has the clearest downward movement in the trend. 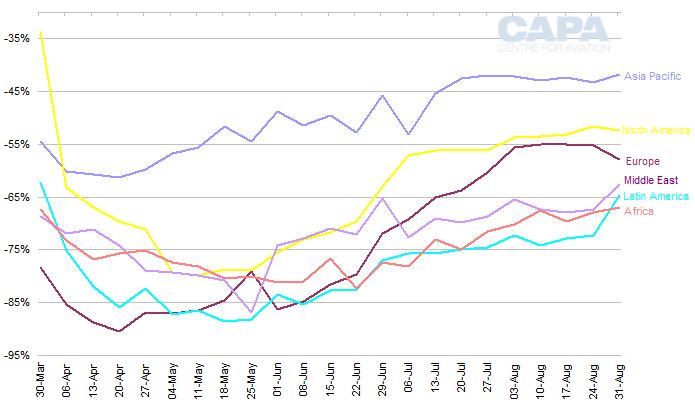 Again, future schedules filed by airlines with OAG have been cut this week, particularly for Sep-2020 and Oct-2020.

For 3Q2020 as a whole – normally the peak quarter of the year – European seat numbers derived from schedules filed with OAG are projected to be 60% below the same quarter of 2019, i.e. at 40% of last year's level.

Projected Oct-2020 seat numbers are 11% lower than expected last week are now anticipated to be down by 40% year-on-year (compared with -33% projected last week).

Last week's outlook included the first signs of downward adjustment by European airlines to their schedules into the winter season. However, there are only minimal further cuts to the winter schedule this week.

With capacity for the final two months of the year scheduled to be 87% of last year's levels, significant further cuts are inevitable. 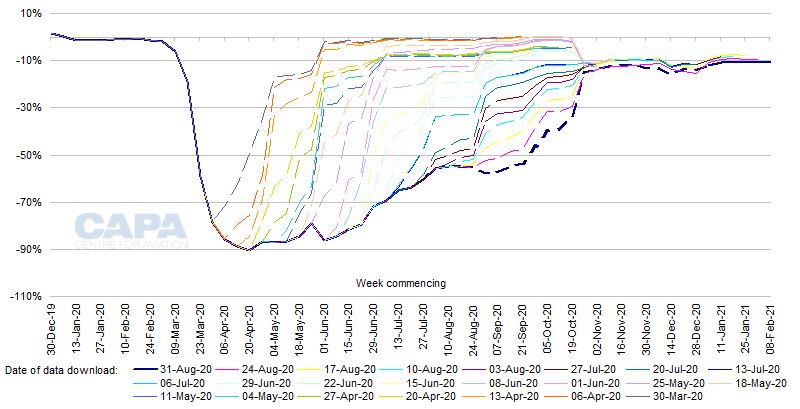 Europe's volatile travel restrictions environment is weighing on the recovery

The clear downward step in Europe's capacity recovery this week, after a month of stagnation, illustrates the impact of Europe's volatile travel restrictions environment.

Restrictions on travel between European countries and between individual European nations and countries in other continents began to be removed in early Jul-2020, when a number of airlines also began to return capacity beyond the minimal levels that they had maintained during the Apr-Jun period.

However, since then the approach has not been consistent among the nations of Europe, with each country adopting its own stance towards the resumption of international travel.

Moreover, restrictions imposed by individual countries on other nations have both risen and fallen.

At a time when the European holiday season is usually at its peak, this has resulted in much weaker demand for air travel and, even where there is demand, much shorter booking horizons.

Recent examples of the reintroduction of travel restrictions include Hungary's decision to bring back border controls limiting foreign arrivals from 1-Sep-2020, and the UK's reimposition of a 14-day quarantine requirement on arrivals from Switzerland, Czech Republic and Jamaica.

Meanwhile, Germany is considering the introduction of a mandatory five-day quarantine for travellers returning to the country instead of COVID-19 testing on arrival after summer 2020. The decision is being considered to avoid exceeding testing capacity, but could potentially dampen demand for air travel.

A number of LCCs are reducing previous capacity plans

The ongoing uncertainty over travel restrictions has interrupted the capacity recovery in Europe and started to reverse it slightly.

Even the ultra LCCs Ryanair and Wizz Air, the two most aggressive restorers of capacity among Europe's biggest groups, are adopting a slightly more cautious approach.

Ryanair, Europe's biggest airline group by 2019 passenger numbers, had already indicated that it would reduce previously planned capacity for Sep-2020 and Oct-2020.

On 1-Sep-2020 Wizz Air announced that its capacity for the Oct-Dec quarter of 2020 would likely remain at 60% (as in the Jul-Sep quarter), rather than growing to 80% as previously planned, if "mobility restrictions across the network persist".

Wizz Air added that further reductions remain a possibility, and it may park parts of its fleet this winter to protect its cash balance.

Other LCCs have also indicated that previous capacity plans are being scaled back.

Jet2.com has suspended its routes to Spain's Balearic Islands for the rest of the summer, and Vueling is reducing its seat capacity by 20% month-on-month in Sep-2020.

But LCCs have increased their seat share within Europe since lockdown

Nevertheless, LCC capacity is still recovering more quickly than the European market as a whole.

One European LCC that is enjoying a clearly positive recovery from the depths of the pandemic crisis is Pobeda.

The Aeroflot low cost subsidiary carried 1.6% more passengers in Jul-2020 than in Jul-2019, taking its monthly total to 1.0 million passengers.

This makes it the only Russian airline – and possibly the only airline anywhere in Europe – to achieve year-on-year growth in passenger numbers in Jul-2020. No other leading airline has even managed year-on-year capacity growth yet.

Pobeda's positive development illustrates two important factors that are likely to be features of successful airlines in the post-crisis recovery.

These are: a large domestic market (Russia has Europe's largest), where travel restrictions tend to be most relaxed; and low cost operations, which allow for attractive fares and do not rely on high yield passengers typical of slow-to-recover business travel.