Europe's full service airlines have continued to see the deterioration in demand outpace their efforts to cut seat numbers. For the week ended 17-May-2009 (Week 20), total passenger traffic (RPKs) for Association of European Airlines (AEA) members was down 9.5% year-on-year, a mild improvement on the 9.9% fall the previous week. However, its still one of the strongest falls since the Easter period. 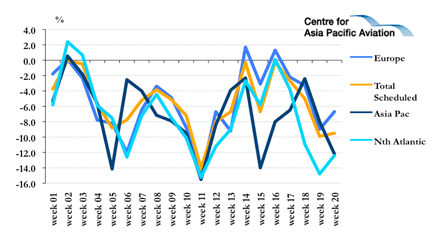 Asia Pacific traffic has not yet arrested its steep downward trajectory. RPKs fell 12.2% in Week 20, worsening from the 8.0% fall in Week 19. Traffic on Asia Pacific routes has generally been weaker than North American or European traffic, despite stimulatory efforts by airlines. 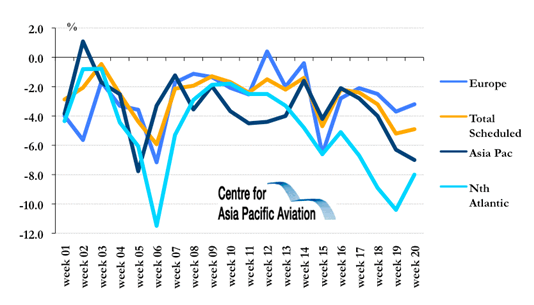 Total scheduled ASKs dropped 4.9%, much in line with last week's 5.2% reduction and continuing the trend of strong capacity reduction seen by Europe's full service carriers in the past few weeks.

Capacity on the North Atlantic again saw the strongest falls, down 8.0%, while Asia Pacific ASKs dropped by 7.0%. Capacity reductions on cross-border European traffic again lagged behind the cuts to long haul capacity, down 3.2%.

Competition of the North Atlantic looks to be consolidating, with Air France-KLM and Delta Air Lines announcing a new long-term JV under which they will jointly operate their trans-Atlantic businesses by coordinating operations and sharing revenues and costs. The new JV, which included Northwest Airlines, represents approximately 25% of total trans-Atlantic capacity.

The British Airways, Iberia Airlines, American Airways tie-up is still provoking arguments, but BA is confident of a positive result within six months.

If alliance moves do not achieve regulatory breakthroughs and economic conditions remain anemic, the outlook for the Northern Winter could be very bleak for AEA carriers. 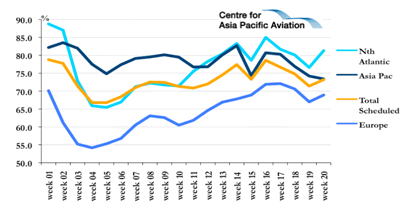 Load factors on the North Atlantic are now the strongest of the AEA reporting areas. In Week 20 they were 81.3%, strongly up from the 76.6% reported in Week 19. European load factors remain generally at the weaker end of the scale although they too showed some improvement, at 68.9%.

Air France-KLM CEO, Pierre-Henri Gourgeon, has framed the capacity reductions in Europe in warlike terms, stated that the airline group was "leading the battle and moving more aggressively than Lufthansa and British Airways" to reduce capacity.

British Airways, which reported a GBP358 million net loss for the year to Mar-2009, stated that the carrier has now shifted its focus from managing yields to increasing passenger volumes, as the market becomes increasingly price sensitive. While the carrier plans to reduce capacity by 4% over Northern Winter, CEO, Willie Walsh, stated that BA's market share is growing at the moment, and the carrier "must maintain this momentum", despite the fall in premium travel.

With premium traffic still weak, any strength in pricing and yield control seems a long way off for Europe's full service carriers. They are now engaged in a battle to cut capacities - and even deeper cuts could be required if conditions fail to improve after the Summer.