Shares in Lufthansa dipped 1.8% on Friday, as the carrier announced plans to halt capacity growth in 2010, in preparation for prolonged market weakness. The carrier, which has 15 A380 orders scheduled for delivery between 2010 and 2015, plans to retire up to 20 aircraft in 2010, as it takes delivery of new widebody aircraft, including the A380s.

Lufthansa is also holding talks with Virgin Atlantic regarding the future of bmi. Lufthansa announced last week it is considering plans to sell its 80% stake in loss-making bmi. The parties stated the discussions may or may not lead to an agreement and a further announcement “will be made in due course”.

Air France-KLM shares were down 1.8% on Friday, as the Paris CAC Index closed 0.22% lower.

Elsewhere, shares in Aer Lingus lost 2.4% on Friday, as the carrier’s earnings forecast was lowered from an operating loss of EUR130 million to EUR150 million for 2009. British Airways’ shares were down 1.1% on Friday. 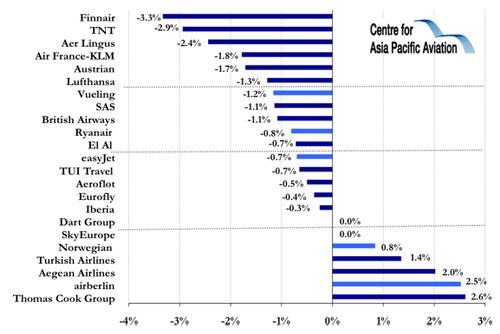