British Airways enjoyed the largest stock market gain of the European airlines yesterday, its shares rising 7.7% upon the release of its Jul-2009 traffic results.

BA expects volumes and seat factors to improve in the peak Summer months, following a stabilisation in the first quarter. Passenger numbers declined by just 1.2% year-on-year in Jul-2009, while passenger load factor increased by 3.1 ppts to 84.6%. Premium traffic in the period decreased by 11.0%, however, non-premium traffic was up 3.5%.

Aer Lingus' shares gained 2.1% yesterday, as the carrier signed a two-year agreement, worth GBP500,000 p/a, establishing the carrier as the sole provider of air transport for the Northern Ireland Civil Service between Belfast and London Heathrow. 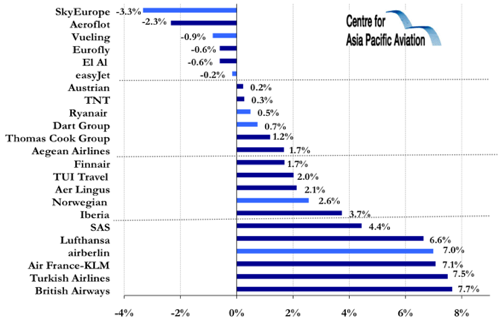